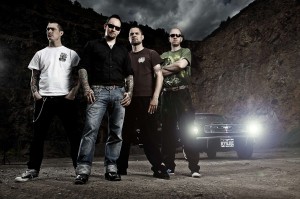 Since the last time we saw Volbeat in Cincinnati, they have blown up in the US with their tour with Megadeth and Motorhead. They are a premier and first-class European Metal band that is sweeping North America by storm playing coast to coast. They have been touring on the album Beyond Hell/Above Heaven for a couple years now and are set for another run this summer.

Amy spoke with band drummer Jon Larsen to get everybody ready for their set at Rock on the Range. The two discussed the evolution of the band in the short time since they were last seen in Ohio. They will be taking the stage at Rock on the Range in Columbus next weekend along with the rest of the best acts in Metal and Rock music.

Amy: I know you guys just got off the Gigantour Tour. Did you have any crazy Motorhead or Megadeth stories along the way?

Jon: No not really actually, not really any interesting stories to tell. We got along fine with both camps and everybody was in high spirits. I think it was definitely a great tour for all.

Jon: Oh yeah, I am always looking forward to seeing Anthrax. We like to hang out with those guys.  We have hung out with them a few times. We don’t know Zombie or Manson but Anthrax is gonna be cool.

Amy: Growing up, what were your biggest musical influences?

Jon: We had tons of influences, everything from Social Distortion to The Misfits to Metallica to say Johnny Cash, everything. That is why we do what we do. We blend all of our influences together and that is what has become us.

Amy: I know you guys had Hank Sherman playing guitar on tour. Is he going to be joining the band full time?

Jon: No, he will not be joining us full time but he is with us on this tour and with us on the next tour as well. Things work out great with Hank. He is a bit of a free spirit that likes to do all these different kinds of projects and stuff like that. It is good to have him along and helping us out.

Amy: What do you do on your down time on the road?

Jon: It depends on where we are. Yesterday and today we have been in Memphis so of course we all went to Graceland and saw that. What else, I guess the usual things, relax, watch movies, go to the mall, restaurants, usual stuff, nothing fancy.

Amy: Did you say you went to Graceland yesterday?

Amy: Is that the first time?

Jon: For me it was, Michael has been there three times before. For me it was my first time and it was definitely interesting to see where Elvis had lived.

Amy: Were you an Elvis fan?

Jon: I like him. I won’t say that I am a fan like Michael is, but of course I like the music that Elvis did. It was cool.

Amy: I talked to Michael last summer, the last time you guys came through Cincinnati at Bogarts, and I talked to him about a few of the songs. But since that time, “A Warrior’s Call” has really taken off and has become a sports anthem. Can you tell me a little of the back story behind that song?

Jon: It was written for a Danish boxing champ Mikkel Kessler. Michael had gotten to know him and they had become good friends and one day they were joking around because we found out Kessler had used one of our previous songs as his walk-on music and Michael had said, “Why don’t you get some real music, a real song” and he said “Why don’t you write me a song?” and he said “Ok, I can do that.” So that is the story behind “A Warrior’s Call” it was written specifically for Kessler, but it seems like especially in America everyone from hockey teams to weddings are using that song for lots of stuff which is kind of fun in a way.

Amy: You guys were just kicking off your North American tour the last time we spoke in Cincinnati. What was the highlight of your tour through North America in the past year?

Jon: That is difficult to say actually. I don’t know. We played two nights in Anaheim, California which both sold out. We played in New York which has always been great. We have done some shows at a place called the Machine Shop in Michigan which is always a great laugh. Those are some of the highlights I can’t point out anything in particular.

Amy: Are you guys going to go back to Europe for summer festivals there?

Jon: We are going to do one festival in Europe this summer which will be in Germany. That is the only European festival that we are going to be doing this year.

Amy: Are you working on new music at all on the road?

Jon: Yeah, before we went back on the road for this one, we had spent a lot of time rehearsing trying to come up with some new stuff. A lot of bits and pieces, a few half-finished songs here and there but nothing that is that finished yet but we are definitely working on getting into the studio late this year and have a new album out some time next year.

Amy: What can you tell the fans to look forward to at Rock on the Range?