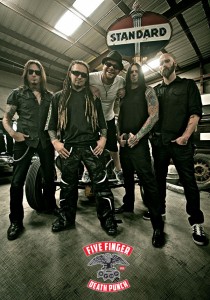 Five Finger Death Punch will be one of the headlining acts of Rock in the Range this year, one of the nation’s biggest Hard Rock and Metal festivals that takes place in Columbus this weekend. They have become known for their “active” show encouraging crowd participation that can get on the edge of out of hand at times. The band released their third studio album last year American Capitalist which quickly shot to the top of all Rock and Metal charts.

Amy caught up with drummer Jeremy Spencer to preview next week’s festival. The two discussed the grueling nature of the industry especially as a drummer and the advice that has driven him to be in the position of leading the rhythm and timing of Five Finger Death Punch. They will be taking the stage Saturday night on the Main stage in Columbus.

Amy: I was excited to talk to you because I know you just won the Golden God award for Best Drummer. How was that experience for you?

Jeremy: It was really great because I am a fan of all those drummers in the category and to be put in the same category was humbling already and then to win, it was “Wow, this is really cool.” We couldn’t be at the show because we were out on tour. I got a call saying, “You know he won and if you could put together a video for the acceptance that would great.” So I made this really ridiculous acceptance speech video where I dressed up as redneck fans mocking me giving a speech so I did a multi-character video for winning the award and it was really funny. It is all over the internet in case you get a chance to see it. Everyone got a kick out of it, but overall it was a really humbling experience and really cool.

Amy: You guys just made another trip to Kuwait as well. I know it is really important to the band  to support the troops. What was your most memorable experience this time around?

Jeremy: We got to hang out with the troops a lot during the day and talk to people and we do extensive signings for them. The shows were pretty crazy. They don’t get a lot of entertainment over there so they are really excited when we get to come and play. And it is exciting for us too because they are such huge supporters of the band so it is the least we can do to give back to them because they sacrifice so much to be away from their families. It was very cool. The only thing that wasn’t cool is that there is an 18 hour plane flight to and from Kuwait. That is the only brutal part but the rest of it was incredible.

Amy: I actually did see some of the Youtube videos from the shows over there that were posted and they looked like they were crazy with the crowd surfing and the moshing and they really go into it.

Amy: I have listened to the album since it came out but in a lot of the recent songs there is serious hardcore drumming action. How do you stay in shape and how do you condition for that kind of hitting?

Jeremy: I do a lot of stretching. That is the thing I didn’t do much growing up but now as I am getting older I have realized that stretching is vital. It is almost like doing yoga really. I use hard foam rollers to roll out my muscles and get the knots out. Stretching is key; any drummers that are doing this I would recommend doing that starting as young as you can. I also don’t party anymore. I try to take care of myself. I try to eat things that are relatively healthy. So that is pretty much what I do.

Jeremy: It really is. We are kind of like athletes. We have to get up there and perform for 75 minutes sometimes or 90 minutes and it takes a toll on you physically. We are not playing pop music. It is pretty aggressive. It is physically demanding. When we started out, we definitely participated in that party lifestyle. I am one to try it, but if you are going to be successful and have a long career then you can’t get wrapped up in that stuff. Rarely does it work so I figured it was time to treat this like a job. It is a job but it is a great job.

Amy: Let’s talk about Rock on the Range.  I have seen you play there before a couple years ago. It is always a good time. Is there anything that you are looking forward to specifically around that show?

Jeremy: Last time, we had one of the biggest crowd surfing experiences that Rock on the Range had ever experienced and it is well documented on Youtube. So we will see how crazy the fans can get there this time. We certainly enjoy it. Every time we play there, it has been great. And you know, all the other great bands, and hanging out with our friends, it has always been a positive experience and I look forward to getting back there and doing it again this year.

Amy: I was there last time. I am a photographer so I am always down in front for the beginning parts so it is always a little sketchy with the crowd surfing for us.

Jeremy: Absolutely, you might want to wear a helmet or something.

Amy:  You guys just announced your summer tour. You did it in a kind of crazy way with the prisoner-style roll down Sunset Blvd to announce the Trespass America festival. How did you choose bands for the summer tour and how did you go about coming up with that scheme to roll it out and make the announcement?

Jeremy: We have been fans of these bands forever. We have listened to the records and we are friends with some of them and have done shows with some of them. They were the bands that were available too. We talked about taking bands that were more Indie and bringing them together for one show and kind of going into mainstream territories and arenas and it is kind of like trespassing on that territory so it fits with that theme. And as far as the military escort in, we shut down Sunset Blvd or part of it and we were drug in on military trucks in handcuffs and hoods and they took us into the Key Club and then released us one at a time per band. It was something that had not been done before and we decided we wanted to make a big splash with the press conference and that was Zoltan’s idea, our guitar player. It turned out really good and it was a fun day. I am excited about this lineup. I think it is going to be really cool. A lot of the shows are indoors as well so you won’t burn up outside because it is summer, and the opening bands will have a light show and a production which if you go to some festivals the first band is on at two in the afternoon with no production in the broad daylight so this time everyone gets a shot to bring their show and it makes it that much more special for the fans.

Amy: I love Pop Evil and Trivium. Those guys are awesome and I am sure it will be a great show.

Jeremy: Oh yeah. We are excited.

Amy: Can you tell me the story behind the new single “Coming Down?”

Jeremy: It was a song that Jason came to the table with musically. It stuck out to me as being something special we hadn’t really had before with the acoustic beginning which I thought was really cool. It was fun for me because basically in the middle section there is a big drum solo which to hear that pump out on the air waves of radio is rare and that is fun for me. I am excited. It just came out. The video should be done within a week or so to coincide with that single. It looks like it is going to be another big one for us. We have been really fortunate to have success at radio and have people call in and respond and request Death Punch. We’ll take it because without radio today it is tough to sell records. Even with radio it is tough to sell records. We are very fortunate that people are buying the Death Punch record in a day and age where they are stealing the other records online.

Amy: What is the best advice you have ever been given?

Jeremy: It was always my parents. They have always been supportive. No matter what I did, they said it was going to take time and be patient. It is probably not going to be on your time schedule for you to have success but if you stick with it and do what is honest, at the end of the day nothing else really matters if you have a breakthrough or not as long as you feel good about what you have done then the rest is just like icing on the cake. They were always supportive and pushing me as positive as possible which is really nice.

Amy: Yeah, it’s hard when your kids have drums in the house.

Jeremy: You know they let me jam in the house for years, obnoxious banging drums and having loud bands in there and they were always cool about it so I was real fortunate. The neighbors most certainly hated me but I was fortunate to have cool enough parents to let me jam away in the house.

Amy: What can we tell the fans to expect at Rock on the Range from you guys?

Jeremy: Just get there early and get your place up front because I am pretty sure they will get knocked around out of there but we look forward to bringing an exciting show with cool production. We look forward to seeing familiar faces and new ones.