Q&A with Rise Against Joe Principe

Rise Against is the epitome of Punk Rock in this era. They are as far from the status quo from society as bands get. Their direction is to promote progressive issues, both socially and politically. They have recently released their sixth album , Endgame which features the hit single “Make It Stop” which was nominated for a MTV Video Music Award last year.

Amy spoke with bassist and original member Joe Prinicipe in anticipation for their upcoming show in Cincinnati. They discussed the bands writing process and how they incorporated their socially active direction in their music. Rise Against will be performing at Riverbend Pavilion on May 5th and will be sure to entertain and inspire those in attendance.

Amy: Thanks for taking the time to talk to us. I know you are one of the original band members. You guys have been out on it for about 13 years from when you started. Where do you see yourself in 13 more years?

Joe: It’s hard to say with this business but I would say definitely still involved with writing music and performing. Rise Against has no intentions of breaking up. We would like to follow the same career paths as bands like Bad Religion and Social D that are going on 25 or 30 years and are still making relevant music. I hope that’s where I end up.

Amy: I saw you last year with the Foo Fighters when you opened up in Columbus. I was wondering if there were any fun and crazy Foo Fighter stories on tour.

Joe: It was pretty awesome when there were a group of protesters, I think we were in St. Louis…Maybe it was Kansas City, and they were protesting the Foo Fighter show because they did that funny promo video where they were showering together. So this group came out, this very homophobic religious group. They were protesting and the Foo Fighters came out dressed provocatively and they were out on a flat bed truck and performed and tried to play as loud as they could to overshadow, overpower the protestors. It totally worked and it was awesome. 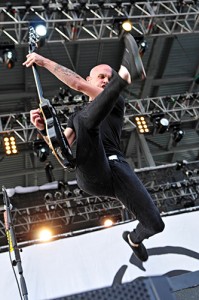 Amy: They seem fun to be around in general and don’t take it too seriously.

Joe: Totally and they are all about enjoying what they have because being on the road and being away from your family is hard enough so you might as well make the most of it.

Amy: Your music has been called protest music in the past by the Chicago Tribune (your hometown newspaper) and I just wanted to ask about your process to write lyrics around a cause. How do you choose a cause to support and then develop a song around it?

Joe: Tim writes all the lyrics and the process is very simple. He is just writing what he feels for that day. He writes from a personal perspective on life in general. That’s why our records are not just political, there are socially aware topics, there are environmental issues, there are songs about relationships and how hard it is to be away from our families when we are traveling. We always write music first and he will hear the tone that the music sets and he has a journal, and he will flip through the journal and see if something fits and if not he will write what he thinks will fit the music and that is how it has always been the last 12 years.

Amy: Were you guys influenced at an early age or did something happen to you that kind of made you take your music toward this activism tone or did you have a kind of defining moment?

Joe: No, it’s just seeing punk rock music. It’s just the nature of punk rock that seems formed as a reaction to the glam era of the 70’s. It’s just a reaction to that so it’s always been about that. It’s all we know. It was something that we didn’t even discuss. It was just kind of a given the direction of Rise Against was going to be that and we are kind of carrying that torch. Bands like Minor Threat and the Bad Brains were definitely singing for change whether it was singing against homophobia or social issues, but that’s kind of what the unspoken goal that the band has always had. 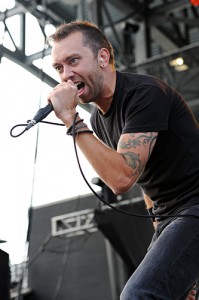 Amy: What is the biggest way your music has been able to make a difference or make a change?

Joe: I would say the effect that “Make it Stop” has had on young kids. Kids in high school trying to get through it all. We have gotten so many e-mails that the song is helping them through the hardest time of their life and that is incredibly rewarding. I would say “Make it Stop” stands out as that.

Amy: Your new album came out last year in the spring. Do you have any new music in the works?

Joe: No, we still have a whole year of touring on Endgame. I think I always have song ideas in the back of my head and so does Tim. It’s kind of an ongoing thing anyway. We won’t actually have anything, officially new until the end of 2013.

Amy: Do you have any crazy Cincinnati stories from the past or any fond memories?

Amy: It’s Bogarts and this time you are at Riverbend which is outside.

Joe: That’s right. The only thing I recall is from Zach our guitar player. His old band played Bogarts and someone was shot like 20 feet away from him. That’s really it.

Amy: I think you are in a little safer place by the river this time. I have this new game and it’s a table game with quirky questions and people just give their first thoughts around it, so I have been experimenting with this a little and I have three questions from this game for you. The first question is what skill do you possess that most people don’t know about?

Joe: Let’s see, nothing hidden, although I am a complete coffee snob and I have an espresso machine at my house and I take that very seriously. It has to be perfect. I have to time all my espresso shots as they come out of the machine. So I guess that.

Amy: So you make the perfect espresso, that’s your hidden talent.

Amy: What is under your bed?

Joe: Actually nothing because my wife is a neat freak so nothing can be on the floor.

Amy: If you are on the bus it is somebody else sleeping  under the bed in the bunk.

Joe: As far as the bus goes, our tour manager is usually in the bunk below me so I have him snoring…

Amy: What song would you pick to sing karaoke? 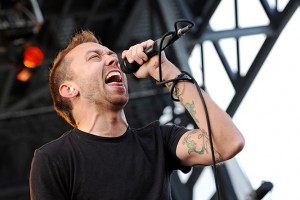 Amy: You don’t have to be good. I don’t think that’s the purpose of karaoke.

Joe: That’s true. I don’t know maybe something from 80’s pop like the Go-Gos or Duran Duran.

Amy: What can the fans expect from the show in Cincinnati?

Joe: Just high energy, just come and sing with us and have a good time. It is all about interacting with our fans and just everyone singing along. We are all there for the same reason. It is a good way to let off some steam from the week prior. Just come out and have a good time.