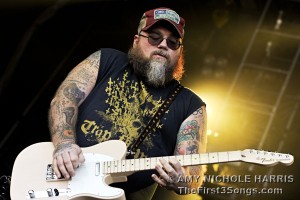 Lucero can be best described as a Country Hard Rock band. They developed their unique sound in Memphis, Tennessee and provide a big production every night on the stage. You will hear everything from three guitars to a horn section to the steel guitar. They have just recently released their 9th album titled Women and Work.

Amy spoke with guitar player Brian Venable out on tour to preview the show this week in Cincinnati. The two dived into his musical influences and the band’s busy work schedule. It will be an amazing night of music at Bogart’s Wednesday night April 11.

Amy: I wanted to catch up with you guys to try to talk about the show that you have at Bogart’s on April 11.

Brian: Well thank you. I am excited about that.

Amy: I actually caught you guys at Orlando Calling this year. That was the first time I had seen the band live. It was an amazing show.

Amy: I am kind of sad that the festival is not going to happen this year. They announced last week it wasn’t coming back.

Amy: No, I think it just lost a lot of money. Unfortunately, that happens. It’s a lot of overhead.

I just wanted to start and ask you a couple questions about the album and yourself. I know you had a new album come out recently, correct?

Brian: Yes we did.

Amy: Women and Work. Can you tell me the story behind the album name? 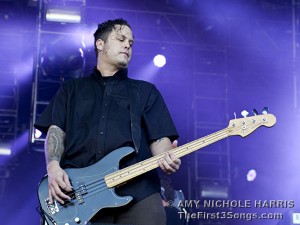 Brian: I think it just sums up everything sometimes. It was more of a flip or a funny line, like “Hey what’s going on?” “Oh you know, women and work.” You are always doing something about work. You’re at work or you are working, and whether it’s your wife, your ex-wife, girlfriend, soon to be girlfriend, girl you met that night, there is always something involving a woman. I think it is kind of where we are right now. We are always on tour. We are always leaving our wives and girlfriends behind, trying to just make it all happen.

Amy: Do they ever come out on the road with you?

Amy: Well you guys have a pretty large band to move around.

Brian: Yeah, we have the bus right now.

Amy: What is the best and worst thing about being on the road for you?

Brian: Missing the kids. Everything that you know is at home. Some days it is nice to sit on the porch and hang out. But in the same breath, you play rock shows every night which is awesome and you tour with your friends and you get to see the country. There is good and bad in everything.

Amy: You guys are from Memphis right?

Brian: Yes we are.

Amy: I am originally from Tennessee and I spent a lot of time in Nashville and Memphis over the years and the music scene in both of those cities is incredible; there are huge amounts of talent that will probably never be discovered.

Brian: That is always the thing with Memphis, there are always great bands that will be together for six months or a year and then they break up. Yeah, that is definitely a true statement on your part. 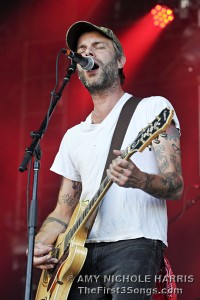 Amy: What is your favorite track on the new album?

Amy: Can you tell me the story behind one of those?

Brian: “Downtown” is like the happy beginning. The night is full of promise I guess. You are getting dressed or you are having a few drinks, you are about to go downtown and hang out and do your thing. Nothing good or bad has happened but anything could happen, and I think that air of optimism is exciting to where we might end up hammered drunk at the police station or I meet my next wife of 30 years, you just don’t know. I think it is just that kind of feeling, where it is happy and a “let’s see what happens” feeling.

Amy: You guys just played South by Southwest. Any crazy stories from Austin this year?

Brian: Not really so much crazy. We did two shows a day for three days plus interviews and in-stores. It was pretty busy. It was exciting to get to play with Dinosaur Jr. Any chance that you get to play with people you listened to when you were younger and looked up to musically is always a fun thing.

Amy: That was one of my other questions,  do you have any current musical influences that are giving you inspiration today?

Brian: We just did a five day run with Larry and His Flask. Those guys are amazing and really energetic and fun to watch. Todd Beene who plays pedal steel, he is in a band called Glossary. Their songs are awesome and their live show is great. They make good records. We have been really lucky to be able to play with all the people we like usually. We did 15 weeks with Social Distortion. You are able to grow up with a band and then get to see those people who started 30 or 40 years ago still make relevant music and be fresh. It is exciting to know that you can get to a certain age and you don’t fall back and rest on your laurels and still keep pushing.

Amy: I love those guys. 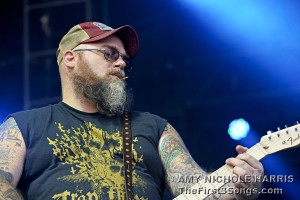 Amy: What is Southern Metal?

Brian: Bands like Black Tusk  and Weedeater. There are a lot of bands out of Atlanta, Georgia and Wilmington, North Carolina, and that whole Southern coast has spawned a whole crazy group of bands. There is Coliseum in Louisville and Skeleton Witch in Ohio. They are pretty awesome if you like Metal.

Amy: Can you tell me what your writing process is as a band? Do you guys write together, lyrics separately, music later? What is your process?

Brian: With the last few records, we have a practice space and a studio space we use upstairs. We will come to the practice with a part or half of a verse or a bridge and a chorus and just a section a lot of the times. Sometimes it is a full song and we work it up but most of the time it will just be a few pieces. We’ll work with Roy and get a tempo going and a pattern going and a groundwork and then we just add our parts while he is working on the words for it. It’s been pretty awesome. This last record, which was fun for us, horns came in after the fact and we put horns on top of the record, so this one we actually wrote with the horns and the pedals, everybody was there helping with writing and arranging.

Amy: What can we look forward to in Cincinnati next week?

Brian: Eight dudes getting wild on stage unless the night before was pretty hard then it might kind of be the standard. We will do about two hours. We will do a lot of the new songs. We will do the back catalog. We are all going to have a good time just playing music.