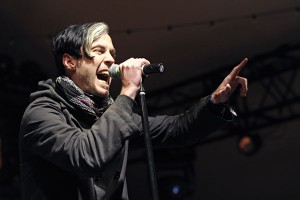 Fitz and the Tantrums is an Indie Rock band that is getting more popular and more of a following by the day. The band’s debut record from last year Pickin’ Up the Pieces reached number one on the Billboard Heatseeker chart. Their song “Money Grabber” has become an anthem for activist recently in the Occupy Wall Street movement across America. They produce an electronic sound through a jam band style incorporating instruments like the saxophone and several percussions throughout. They have gained great momentum throughout the country and are now a headlining act with songs appearing on the small screen in shows like Criminal Minds and Grey’s Anatomy and performing at large festivals across the country.

Amy: Since it is Super Bowl week, the first thing I want to ask you about is the football. Are you a football fan?

Michael: I am a football fan. We have pretty much been on the road the road the entire football season so usually Sundays are dedicated to everybody piling into the bus to watch the games.

Michael: I am actually a Giants fan. Noel is a Packers fan. John, our drummer is a New Orleans fan.

Amy: So I guess I don’t have to ask who you are rooting for.

Michael: No, but I may be the only person in my band that will be a Giants fan. It got kind of contentious there when the Packers and the Giants played.

Amy: I was kind of shocked actually. I actually expected Green Bay to be there again. Have you attended any Super Bowls in the past?

Michael: Never been to the Super Bowl ever. So for us to be a part of the whole festivities and get to play on top of that is going to be pretty exciting.

Amy: Are you staying for the game or are you doing anything outside of the game?

Michael: We are going to do a performance on Jimmy Fallon and hopefully get to run around. Trust me, we tried to get tickets but those were hard to come by so we will not get to actually be there for the game.

Amy: What have you been up to since Voodoo Fest in November when we last saw each other?

Michael: We pretty much have been touring nonstop since then. We were on a whole East Coast tour and Midwest tour when we did Voodoo Fest. We went all over the place from Atlanta to New York, Philly, Boston. We did Cleveland and Columbus and got to have a couple days off for Christmas and then we just got home yesterday from doing a whole West Coast tour through Denver, Vancouver, Seattle, Portland, San Francisco, Boise. It was a lot of fun, sold out shows everywhere, kind of crazy, and now we have literally two days at home before we have to fly to Indianapolis.

Amy: Last time I talked to you, you guys were talking about playing Occupy Wall Street when you were in NYC for your east coast tour. You spoke about playing “Money Grabber” and “Dear Mr. President.” Your “Money Grabber” song could almost be the theme for the whole movement. Did you make that happen?

Michael: Yeah, we actually went up there and played which was pretty intense to be able to go in and see some of the commitment that some of these people had. Just the intense emotions that it is coming about on both sides of the issue. Definitely made a lot of friends and made a lot of enemies; not enemies, but people would just on our Facebook page let us know they were not happy with us doing that.

Amy: Did that shock you?

Michael: A little more than I expected , but I was kind of prepared for it. My stance was always that people want to make us into a partisan issue and it is really a personal issue. My Dad lost most of his retirement fund in the stock market crash. We should keep it outside of partisan issues and just advocate for more responsible capitalist sort of ways approaching the issues.  There used to be checks and balances that were there for many years after the Great Depression that kept us safe from inflated bubbles and just the basic human nature of overt greed. We are a band, we are a capitalist venture. We are on the road trying to make money and make a living and trying to be successful. We are not anti-capitalist, just sort of trying to keep the focus on fiscal responsibility.

Amy: It has kind of died down now. I think some cities are still active with the protests like Oakland, but it is pretty much broken up. It will be interesting to see with the election coming up how the people will speak about it.

Michael: I think it certainly became kind of a media moment for people but the core of it was people saying, “Hey, there are a lot people that are still hurting several years after the financial meltdown happened.” This is a real thing that is happening for all of us that we are still climbing our way out of. There has got to be a little bit of balance to the way we do things in this country.

Amy: Are you guys planning on backing any political candidates as we approach Super Tuesday?

Michael: We all have our own personal political beliefs. 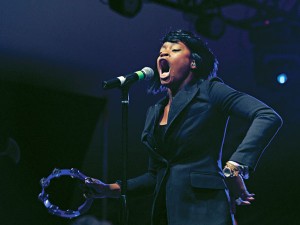 Amy: As a band, you don’t think you will come out and support someone?

Michael: I don’t know. We very well possibly could. We haven’t had that discussion as a band yet, but I am sure as Super Tuesday comes around we will have a discussion about it.

Amy: I was reading past interviews from you guys. I truly believe success is a combination of really, really hard work and a little bit of luck and I know you guys have kind of experienced that. You work really hard to put your music together. Do you have a story how that has happened for you?

Michael: The luck part of it is something like Adam Levine from Maroon 5 getting a tattoo in New York from his favorite tattoo artist. The guy, having just discovered us the week before, was obsessed with the record was playing it when Adam came in. He said, “Adam you have to hear this new band, Fitz and the Tantrums. I love it.” Adam heard it and apparently he doesn’t like anything and he flipped out. Literally a week and a half later we were opening up for them on their tour, on their college tour. It has been those kind of crazy happenings.

Amy: What are your upcoming tour plans for the Spring and Summer?

Michael: After the Super Bowl, we are taking a couple months off just to focus on doing some really focused song writing for the next record. And we are going to kick off the next touring cycle, we are going to do Coachella which is two weekends. We are going to be doing a bunch of other festivals but I don’t think any of those have announced yet. We will just be out there playing shows whether it is our own headlining shows or festivals. We are going down to Mexico for Cinco de Mayo, there is a big festival happening down there. We may do some other South American dates.

Amy: So a busy Summer again?

Amy: What is the status with new music? You said you are taking some time off to write it. When can we expect to hear some?

Michael: I think if everything goes well with the writing and recording process, we could see a new album out at the beginning of Fall.

Amy: You have quite a few members in the band. I talked to you last time about your live performance. Are you guys truly friends and do you see yourself with the same band lineup for the duration?

Michael: Oh yeah. We have been like a collective, all of us pushing this thing up the hill for the last three and a half years. This is everybody’s baby. We have put in the time and actually have been fortunate to have this moment of success happening and we spend more time with each other than we do with any other human being and that is just the nature of being on the road and living on a bus together. So we are all really good friends. The little bit of time we have off is spent with loved ones and families and friends and getting a precious few days break from each other. We are going to have another little phase of that, which is we are going to be able to be at home but still writing and seeing each other then back out on the road. But you have to be able to get along and be a family out there because a lot of the time it is you against the world. It is you traveling to a different city every night and the only thing that is constant is you and your crew.

Amy: What can the fans expect from you guys on this weekend?

Michael: They can expect what we always do which is we try and leave nothing behind. We like to have a great time and we love to have people be a part of our show and have a good time especially for something like this where people are coming from all over the country to celebrate the Super Bowl. People are there to have a good time. We will put on whether it is -20 or 100 degrees. We put on the same high energy show. We want people to dance and have a good time and the mood elevated by having had a great musical experience with us.

Amy:. I know you guys have been busy at Sundance and all over the place. Any highlight from Sundance?

Michael: What was the highlight? I thought I had saw Robert Redford for a second but it could have been another mountain man. Although I did see a bearded, what’s his name, the guy from Sideways.

Michael: Yes, I did see a bearded Paul Giammatti huddled in a corner texting. That was my highlight.

Amy: Were you guys out there playing or were you just there attending?

Michael: Yes, Spin Magazine and Bing basically they take over this building and they just put on events all day long there that are really cool and stream it over the internet. They asked us to come out and play. I had a couple friends out there that are filmmakers that were out there with films they had worked on. It was a trip. I woke up in Seattle and was going to bed in the mountains of Sundance. It was a pretty cool experience. You have all these amazing, creative filmmakers from around the world descending on this ski town. It was cool for me too because I am not a film person so I was an observer and there is this great sort of relationship between music and Sundance.

Amy: A lot of musicians watch movies on their long bus trips. Do you have any Oscar picks?

Michael: Oscar picks would be either The Artist or The Help. Those are two pretty amazing movies that I saw this year.

Amy: I have only seen The Descendants.

Michael: I saw that too and that is an amazing movie and one of the coolest performances by George Clooney ever. We actually, right before we kicked off this tour, we did the VH1 Critic’s Choice Awards and performed on there and got to see George Clooney and Viola Davis accept their award so it was pretty cool.