Q&A with Joey & Rob from Anthrax 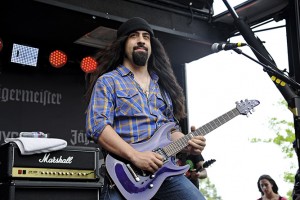 Anthrax are the innovators of what today’s landscape of hard rock and Metal music is. They shaped bands and the movement of Metal in America. They have just recently released their tenth studio album Worship Music which brings back the band’s early sound with the re-emergence of lead vocalist Joey Belladonna. They still pack rooms and continue to guide the state of Metal.

Amy caught up with Belladonna and guitarist Rob Caggiano before their show earlier this week in Louisville at Expo 5 and talked about the direction of the band along with sharing stories of what got them to where they are today. Anthrax will be performing this Saturday, February 4 at Bogarts. Come out to enjoy the legends rock out.

Amy: I have been listening to Worship Music this week. I love it. I am so glad you have new music. The band worked on the album obviously a lot before you came back into the mix. Did you have to re-work any of the songs after you joined? What changes did you make?

Joey: A lot of the music had its structure. When I came in, we found a way to make the vocals fit for me. I didn’t spend a lot of time with it. I just came in and banged a lot of it out. They were re-recording drums, bass, guitars so we were really multiplying everything we had in place. We didn’t really take a lot apart. We didn’t take it completely from scratch. We just picked up where they left off.

Amy: I know you guys have a tribute to Dio and Dimebag with “In the End” on the album. Why was it important for you to put a song like that on the record for them? 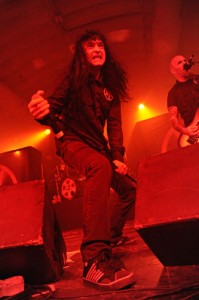 Rob: The song when we originally started recording in 2007, was called “Down Goes the Sun.” Originally it was a tribute to Dimebag. We were all good friends with him. You know, this record took a really long time to make. Then the whole thing happened with Dio. Both of those guys are really big influences on all of us in the band and we wanted to do something special.

Amy: What’s the biggest difference in touring now versus 1987?

Amy: Any crazy Cincinnati stories from the past?

Joey: Oh God. I remember seeing an all girl bar next door in Cincinnati where we played which we are playing again, Bogarts. Yep. I came out and I remember all these girls in this bar and I said, “Ok, I see what we have going over here.” But it wasn’t anything out of the ordinary.

Amy: Rob, I saw you last year at Rock on the Range when you had to fill in for Scott with your other band, The Damned Things.

Rob: Scott had just had his baby, he couldn’t make it to the show.

Amy: I guess “Fight ‘Em Til You Can’t” is my favorite song on the album. I liked it when it first came out, but I have listened to the entire album now and it’s still my favorite. Is there a story behind that song?

Joey: It’s definitely zombies. He’s a movie buff too. When you write a song like that, you just use your own imagination and run with it.

Rob: It’s kind of a recurring theme I think with Anthrax. That was the first song of the new songs that we started playing and it really is working out live. To us it is like an old song at this point. When we finished that song on the record it was kind of taking that shape and gave you good confidence for what we were rolling into, especially for me singing that song and going, “Ok, this is what we are dealing with.” Even though there is a variety on the record, that song has a good center point of what it sounds like. 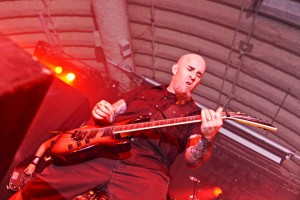 Rob: It has all the elements, the thrash stuff, the melodic stuff, the groove stuff.

Joey: Kind of like a little bit of a persistence of where I left off.

Amy: What was the ultimate deciding factor for you to come back?

Joey: I was asked to come back through management, whoever they had managing at the time thought it would be a good idea. I probably have a little bit different take on it which I don’t want to say at this time. I think everybody wanted to do it right again, I don’t know, it’s so hard for me to answer what really goes down.

Amy: For you, what was the deciding factor for you to come back?

Joey: I love to play. I like being in the band. I never disliked being in the band. I had a great time playing in the band, and I think it works. I was very open to doing it at any time. I wasn’t sitting around waiting for it to happen, and I was interested in it especially if everyone really wanted it. I like it to be a solid thing and be a band again, like we are trying to be now, not just a couple dates, a couple of shows, a couple of weeks. Let’s do it for real and make it a real band again where it is not people coming in and out and stuff. Overall, I don’t mind being in the band. I think it is where we all belong. It is hard to put a good band together where it has the right members and it works. People know who we are. To start all over, I know what it is like to be in another band and do your thing and this works.

Amy: You guys obviously played the Big 4 Concerts last year. Any new ones coming up that we can look forward to?

Rob: You’ll have to ask Lars and James. We’d love to do it.

Joey: We have high hopes over that.

Amy: You guys are in?

Rob: If it happens, we are there.

Amy: What was the highlight of Yankee Stadium? That is your hometown.

Rob: The crazy thing is, Ruben Diaz, the Bronx borough President, actually made it Anthrax day in the Bronx that day that we played the show. He came out and introduced us and stuff. It was kind of a dream come true for all of us. It was just a weird thing. I never thought we’d be playing Yankee Stadium.  But we are all Yankee fans. It was just a magical day I think.

Amy: I know you guys have been doing the tour even without Charlie, unfortunately with his family situation and without Scott for a few days because he became very sick. Why did you guys continue to keep going? 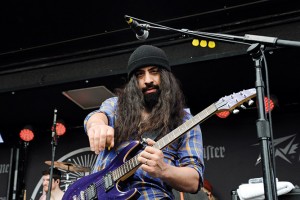 Joey: When we are on the road, it is our schedule to do these shows. To not do them, it takes everybody out of rhythm. There is advertisement, there is the band that wants to play, fans especially.

Rob: We have put a sign up in front of the venue the last few shows letting everybody know that Scott’s not here, Charlie’s not here, and if you want a refund, it’s ok, but the rooms were packed. It was awesome.

Amy: You are lucky to be on tour with two other bands that can help you out too.

Joey: We had a couple people that would have come out too if we would have needed them. It’s just nicer to have these guys that we can practice with.

Amy: You have a song on the album “Judas Priest.” They just finished their Farewell Tour. Do you have any feelings about that?

Rob: About Priest doing a Farewell Tour? I don’t believe it.

Joey: I don’t either.

Rob: KISS has been saying farewell for like 25 years.

Joey: How many times has Ozzy said it? Ozzy said “See ya later” like ten times.

Amy: What can we look forward to on Friday in Cincinnati?

Joey: Back to Bogarts again. Same club, same everything?

Amy: It has not changed much.

Joey: I remember the show. I remember walking up to a radio station after that show. I walked up this road and across the bridge.

Rob: Who were these chicks you were talking about?

Joey: It was “all women” if you know what I mean. It was an all women club. They were yelling at us as we were crossing the street. They were doing all kinds of crazy things.

Amy: Did you go in and have a good time?

Joey: No we were just walking up to that radio station. They were all giddy and shit. Maybe we will have to check it out this time, not that they care about us. Haha

Amy : Are you riding the bus the whole time on this tour?

Amy: What’s the worst part of being on the bus?

Rob: What’s the worst part? I don’t know. I actually like the bus.

Joey: I love the bus. 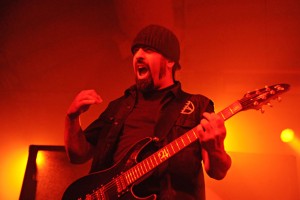 Joey: You don’t shower in the bathroom properly. There is a limited facility.

Rob: I think the bus is only bad when you have either somebody in the band or in the crew that is really, really annoying or smells bad or has weird hygiene.

Amy: Do you tell them?

Rob: We usually fire them.

Joey: Well, you know, it’s a family and it has to be what you want it.

Rob: So far it has been good. Knock on wood.

Joey: Everybody can’t love everyone in every day and every minute, but we try.

Amy: Who is your Super Bowl pick?

Rob: I don’t do the whole football thing.

Amy: It’s the hometown team for you…

Rob: I can’t do the whole guys in tight pants jumping on each other.

Joey: He’s so opposite of me.