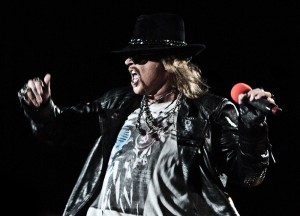 Guns N Roses are icons of Rock. Axl Rose and his distinct vocal sound has continued past his 25th year with his band mates out on the road. They have been selling out arenas since their debut album Appetite for Destruction went to number 1 on all album charts in 1987. They have not released an album since Chinese Democracy in 2008 but continue to rock out with their large production shows entertaining audiences not only searching for a taste of nostalgia but also value great music and a sound you cannot find anywhere else.

Amy caught up with rhythm guitar player Richard Fortus this week. The two discussed his personal music path, what fans can expect from the show and they even talk photographer’s photo rights . Guns N Roses will be bringing their show to Cincinnati on Friday at the US Bank Arena and it sounds like fans can expect a really long night of rock music.

Amy: You have a classical music background. I saw that you played violin and drums when you were four and five years old. How did you make the leap into hard rock and metal?

Richard: I guess when I was a little kid I discovered The Beatles and the Stones and I thought that was much more appealing than classical music. When I was 12, I was playing the drums. I was playing the violin around that same time I started playing the drums. I was getting my rock n roll ya-yas out at the same time I was studying classically. I was doing that all the way through school. Through high school, I always played violin and cello and studied classical guitar as well.

Amy: What advice would you give to kids today who are interested in music or starting a band? There have been such huge cut backs in musical programs at schools.

Richard: If you love it, if you are truly obsessed with music as I was growing up, it is really tough. Right now, it’s such a difficult time to make a living playing music. You have to really love it, you have to live for music and there is no other choice but to do it because if there is you should look into other options because it is not necessarily a great way to make a living especially now with the state of the industry. It’s a very difficult time. It has to be a labor of love and if it is then, the only choice, the only way to do it now is to grow things very organically at a grassroots level.

Amy: And find people you like to be around a lot.

Richard: No. It’s all music. I have always had this unquenchable thirst for music. I love playing all styles. It is all a different challenge to me but it is all rooted in the same place. It is all me. I don’t really change my style all that much.

Amy: I talk to a lot of musicians and they play every day no matter who they are with.

Richard: Yeah. My father always said that to me. He said “You are incredibly fortunate because you would be doing this for free if you weren’t being paid for it.” That is so true.

Amy: You guys cancelled a show this week. Is there a story behind that?

Richard: In Albany? No. There was no drama or anything like that. There were permit issues with the building and the venue. We have a huge production and it is very heavy. The production, it has to be supported and we have to feel safe about it and it has to be within their restrictions and that didn’t work out. They tried to resolve everything. We have had this issue a few times in different venues and it has been resolved and we were just not able to resolve it there.

Amy: So no issues this week and we can expect you in Cincinnati?

Richard: There was no drama.

Amy: What is your favorite guitar solo of all time?

Richard: Wow! My favorite guitar solo of all time is probably is “Sympathy for the Devil.”

Amy: You guys have had a lot of new band members over the years. How do you make your mark or bring your personality to the band but keep the essence of Guns N Roses alive?

Richard: I think it is more about being selective when you do bring somebody in that their vibe is going to fit and compliment the band and what we are trying to do.

Amy: What do you look for when you bring somebody in?

Richard: It really depends on the position. When we brought Bumblefoot in it was trying to find someone that would fill the void when Buckethead left. That is a very difficult task because there are not many people that do that type of thing.

Amy: I read some interviews where people were talking about DJ Ashba coming in and bringing the band together and creating a really positive vibe with him coming along as well. That is always good to hear.

Richard. Yeah. He is fitting in well. He is a really great guy and really easy to work with. It has been a pleasure.

Amy: I am actually a photographer and I’ll be there at the show on Friday night. The band recently has gotten a lot of negative press in the music photographer’s community because of the photo release that the management team makes people sign saying that the band owns the copyright of the images that the photographer takes, which is our art basically. I’m not sure if you were aware of that or if you had feelings about that.

Richard: No I had not heard anything about that.

Amy: I think there were protests and  many people not applying to cover the band which is not a good situation for you guys because it means less press basically.

Richard: There are a lot of mysteries as far as things like that go with this band.

Amy: I just didn’t know if you knew about it or if it had something to do with an incident in the past with Axl not liking photographers potentially. I’m still going to come out because I still love the band and I love the music and I want to see the show. I haven’t seen it in many, many, years but there has been a lot of heat around that issue with the release.

Richard: I don’t doubt that. I’m going to make some inquiries about that because this is the first I’ve heard of it. I’ve had friends come out recently and shoot the band and they haven’t mentioned it to me.

Amy: I think it hasn’t been at every show and a lot of this stuff sometimes starts out as rumors but I actually saw the release from a couple shows ago where people were asked to sign it. I think it is hit or miss depending on the night. It is interesting and maybe they have stopped after people started making a big deal about it in the media.

Richard: I don’t get it. That’s weird.

Amy: It’s almost like you guys playing your music. You are putting it out there but now somebody else owns it. It is a touchy subject in the photographer community right now. There is a lot of discussion about it because more and more bands are doing it. Foo Fighters have done it recently and some other large bands. It is really a deterrent.

Richard: I wonder where that comes from.

Richard: I would assume that it would have to come through management somehow or that management would be aware so I will ask them about it.

Amy: That is all you can do. I thought I’d bring it up because I thought there may have been an incident in the past.

Richard: No, not that I am aware of. Nobody has said anything to me about this, but I know that I see that picture of Axl at Rock N Rio where he was in the yellow raincoat and it was a very unflattering picture. It was everywhere and I still see that picture. It may stem from that but I have seen a ton of pictures since then. I saw it yesterday. It’s just funny. The people that want to make him look bad use that picture.

Amy: What can people in Cincinnati expect from the show?

Richard: They can expect to be there for a long time. It’s a long show.

Amy: Hopefully we won’t have to wait too long for it to actually start.

Richard: Actually timing-wise we have been going on pretty early. We have been starting earlier but we play for a long time. We play between three and three and a half hours.

Amy: That is amazing. I really respect that a lot because you give fans their money’s worth.

Richard: That is really what Axl’s intentions are. He wants to deliver fans their money’s worth and a lot of the times he really pays for it.

Amy: Yeah, that is not easy to do night after night.

Richard: Not only that but he literally PAYS for it.

Amy: If you start late and play late you have to pay the venue correct?

Richard: We pay the venue outrageous fees. On top of that, our production costs are huge. This is a huge production. He is really intent on delivering the best possible show.