Up Close & Personal with Ben Sollee 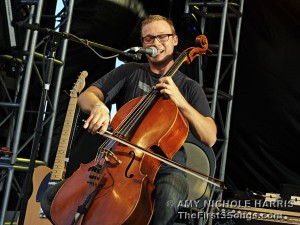 Ben Sollee is a string instrument master who plays music with a true passion. He has spent most of his career in groups like the Sparrow Quartet but has recently branched out into a solo act. He uses his music to send a message for the arts and the environment, having a various number of causes that he supports very actively.

Amy spoke with Ben Sollee at the recent Orlando Calling Music Festival. The two discussed his unique touring style and the cause against mountaintop strip mining in Appalachian Country which he is very outspoken and passionate about. He will be playing a benefit show in Lexington, Kentucky at Al’s Bar on December 2nd to benefit one of his artistic causes, Institute 193. He will also be playing an Appalachian Voices show with Jim James on December 29th at the Brown Theater in Louisville.

Amy: You have some performance dates coming up in Lexington and Louisville?

Ben: You know, it’s funny putting on hometown shows because they are in front of your friends and your family. Putting on big shows in the area as you grow is trickier and trickier. So mostly, I am just doing benefits and stuff. I am going to do a little benefit show in Lexington for an art organization called Institute 193 there on December 2nd. We are also doing one at the Brown Theater in Louisville on December 29th, and that is an Appalachian Voices show with Jim James from My Morning Jacket and Daniel Martin Moore.

Amy: You started playing music a very long time ago when you were little.

Ben: (laughing) It has gotten longer and longer.

Amy: When you typically play the types of instruments that you play, you are usually in an orchestras or groups. I know you were in the Sparrow Quartet. How did you decide to branch out for a solo career?

Ben: Not too much of a decision. It is one of those things you do because you love it and opportunities present themselves and I am lucky opportunities have continued to present themselves. That’s not to say that we don’t work really hard at making opportunities for it. I guess the main reason to do it is I felt I had something to say. Like a lot of artists, it is the only thing that can sustain you when you are out on the road not making money, and people aren’t at shows, you have to do it because you love it. Then you feel like you have something important to say. Otherwise, you will go home. 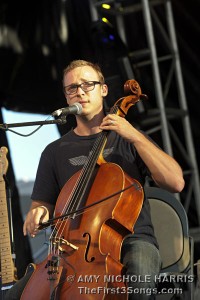 Amy: This year, you have played a lot of festivals. You have played South by Southwest again, Bonnaroo, and now you are here at Orlando Calling. What is your favorite part of playing festivals?

Ben: When it happens, and it is tough at festivals this size, it is collaborations between artists. I like to see bands jam together. Sometimes at festivals this size, it is very easy for bands to get in the habit of just rolling in with all their production, playing and rolling out. I like to see artists collaborate and jam with each other on stage. It is such a unique opportunity because we all have such busy schedules, it is hard to coordinate them to bring them together.

Amy: I heard we are going to have a Bob Seger and Kid Rock collaboration moment tonight?

Ben: That would be an interesting moment to have. I have to say, I will give this shout out to Kid Rock. I am not a huge fan of his music or I haven’t gotten into it I should say. I will say this. He has worked a lot with an organization I have worked with called the National Research Defense Council to help raise awareness about mountaintop removal, strip mining in Appalachia, part of their Music Saves Mountains program. I got a lot of respect for him with the fact that he would be willing to acknowledge that and do any work at all.

Amy: He is starting this small, intimate CARE tour trying to promote individual charities in each community as well across the US right now. I think he does a lot of outreach.

Ben: I think the dude gives a damn and I like that about him. He has a lot of stigma to work through because of the way his career developed, you know sex, drugs, and rock n roll. It is hard to surpass that in people’s minds. It is pretty brave for him too because he has to start with a fresh audience. The audience comes to his show ready for sex, drugs and rock n roll, but he wants to be able to talk to them about stuff. That’s pretty brave for him.

Amy: You have a strong, activist background and opinion on the mountaintop coal mining. Why is that so dear to you?

Ben: I think it is heritage. For me personally, my grandfather and family, I have a lot of family ties to Appalachia, but I also have a lot of cultural and musical ties to Appalachia as a musician and an artist and also as an American. I feel a lot of our American spirit is embodied by the pioneers that set their cabins up and made their homes in the mountains. That was the first frontier right. You land on the coast and you head west until you hit these mountains which were really treacherous and people made livings there. That was the original American pioneer idea. I think losing that and giving it up, sacrificing that for a rock to burn is not in our best interest and a sad thing to see happening. It’s almost like we just don’t care that this is something that we are invested in as part of our story. I hate to see that go. Not to mention, there are so many other options out there that would make it more possible for us to subsist in a more humane way and an environmentally friendly way.

Amy: I know you talked about before riding your bike here, did you make it?

Ben: We did not. We have done about 3200 miles of touring by bicycle over the last two years. We try to commit about a third of our touring each year to bicycle. This year, we started in New Orleans with the intention of riding to Orlando Calling. We got to Pensacola and we just had to call it. There was very little biking infrastructure and just the culture of the drivers down here is very aggressive. Along the coast it was very aggressive. They were willing to take a lot of chances with us on the road. We don’t do these tours to save the world or be green or sustainable. We do it to slow down and be involved in the communities and risking our lives and limbs was not something that was on the agenda. We will re-vamp and probably do another tour next year in a place like Michigan that has a lot more bike infrastructure and is safer. That is really a sad thing we weren’t able to accomplish it down here because we have accomplished it in so many other places.

Amy: That was my question around this. Do you fear for your safety when you are doing that?

Ben: There is a risk at any of this stuff. You see bands constantly, what is the classic band stigma before they are considered a successful band, they are in a white, Econoline, beat up van with a trailer that barely holds up. We just saw one pull up to the stage where we are going to play. That is a dangerous thing if you don’t take care of your trailers and vans. There is constant risk to being on the road. I don’t think the bicycle is necessarily more or less risk. However, in that environment, it was certainly more risk. You could feel it, you could feel the aggression and that wasn’t cool. I guess the most important thing about the bicycle tours is that they are not, everybody thinks of bicycling as a recreational tool and we are using them as a commercial tool. We want to put on a successful, compelling tour that works for the communities, works for the venues, that we can make good money off of just like any other tour. What’s going to make that possible for us is proper infrastructure.

Amy: The last time I saw you play was at the University of Kentucky opening for My Morning Jacket this summer. I wanted to talk about how you started collaborating with Jim (James) and do you plan to record together again in the future?

Ben: Jim recorded the solo record and I did the string work for that. I am really excited about that. That is an amazing sounding collection of songs. I don’t k now when that is coming out though.

Amy: How did you get started with him?

Ben: I just pursued him for mentor-like advice. I was an up and coming songwriter and we both were Kentucky boys. I just reached out to him and we got together a couple times and both realized we cared a lot about Appalachia and wanted to stop the practice of mountaintop removal strip mining and decided to do the project together, Dear Companion. I learned a lot from him as a musician and a person. He still is very much a mentor to me.

Amy: How many days have you ever gone without playing music?

Ben: Probably zero. Playing music has a pretty broad definition. How many days have I gone without practicing? I have probably gone a week or a week and a half without practicing sitting down with an instrument. For the most part though, there is always music going on. It is kind of how I am wired at this point. From what I know about brain development, that is what it is. It has been such a huge part of my life that my brain is pretty wired like that. Even as we are doing this…

Amy: You are distracted by the music in the background.

Ben: It is not really a distraction but a part of the storyline that is happening right now. I am hearing the sounds and I am thinking about Bill Withers. When I think of Bill Withers, I think of hanging out with my family listening to that stuff and singing “Lean On Me.” All this stuff plays out in my head.

Amy: What is the most obscure instrument that you have played?

Ben: It depends on where you are in the world if it is obscure. The strangest instrument that I have ever played that I really also enjoyed was a traditional Chinese instrument with the Sparrow Quartet. It is kind of like a Mongolian cello.

Amy: You just recently played in Cincinnati again last month. Do you have any fond Cincinnati memories?

Ben: Oh yeah. It was a little bit ago but we played at the 20th Century Theater. Really nice. I am glad to see a space like that opened up and that theater revived. Cincinnati is tough market to connect to all the different people. It is split by rivers and industry, infrastructure, and stuff like that. The town has a lot of heart. I hope to go back and do some more music there.