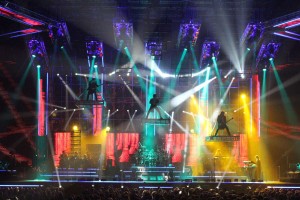 Trans-Siberian Orchestra combines a night at the symphony with the most in your face Rock concert you have had the joy of seeing. They are most known for their holiday-centric shows with great musical scores and massive light and production pieces that stimulate your visual senses as much as the audio. They began in 1993 and have evolved to one of the biggest holiday tickets across the country and a Cincinnati tradition.

Amy spoke with Al Pitrelli last week in anticipation for their show coming to Cincinnati. They discussed his road to become a guitar player in TSO and the production of the show. TSO will be coming through Cincinnati with 2 shows on December 1st at US Bank Arena at 4 PM and 8 PM.

Amy: TSO has somewhat become a Christmas tradition here in Cincinnati as well as in many cities across the country. Do you have fun Cincinnati memories from the past?

Al: I just know that it’s especially a great town. The state of Ohio has been so wonderful to us the past 16 or 17 years. Trans-Siberian Orchestra touring had started in the Ohio area. It kind of feels like we are home when we play there. I live in Pennsylvania so it is like one state over from me and it is like that whole center of the country is terrific and the people are wonderful. I guess it has been since 1999 when we first started coming through Ohio. Not too long after that, Cincinnati was probably in 2000. It is just one of the most important areas that we have played. The people, as you said, have embraced us as part of a holiday tradition. We want to make sure we come back here and do the best show possible year after year after year by making the band better, making material better, and making more and more production.

Amy: Tell me the story of how you went from playing with Metal bands like Alice Cooper and Megadeth to Trans-Siberian Orchestra?

Al: The transition isn’t that difficult. One of the parts many people leave out is that not only had I been playing with Metal bands but I spent a lot of time working with artists like Celine Dion and Taylor Dayne. Being a guitar player in New York, I was really fortunate to be doing a lot of sessions, a lot of records as well as a lot of touring. If I was out on tour with Alice Cooper and I was recording with Alice, I would come home off the road and work for a couple producers in Manhattan and be doing a new Taylor Dayne record or a new Celine Dion record. Getting in the studio and playing was important, it didn’t matter to me who I was playing for. I just loved playing the guitar. I just loved playing with people, female singers, male singers, it didn’t matter. I loved playing heavy stuff, but I also loved playing less aggressive stuff. I just didn’t realize it was all kind of training for what I would be doing with the Trans-Siberian Orchestra. We have five females and three male vocalists, just to speak to each one differently and expect different dynamics out of each one. I think all of that going on back in the early part of my career was just training for this.

Amy: What is the longest you have gone without playing guitar?

Al: I don’t know, about as long as I have gone without breathing, not very long.

Amy: So you do it every day?

Al: Oh heck yeah. I am now 49 years old; I grabbed my first guitar when I saw the Beatles on Ed Sullivan in 1964. I don’t know how to not have one in my hands. I don’t know how not to do it. I really don’t ever want to find out.

Amy: Alice Cooper is known for theatrics. I am a photographer and he is by far one of my favorite bands to photograph. Did working with him prepare you for the theatrics you have in Trans-Siberian?

Al: Absolutely. I think the theatrical side of it with what Alice was doing way back when and what Bowie was doing definitely set the stage. That was something, unbeknownst to me, what was down the block for me, when it was going to become time for Trans-Siberian Orchestra. The show could take on its own life. You just didn’t have to replicate an album live. The songs became a little more important placed inside a story. If you take a song like Jesus Christ Superstar’s “I Don’t Know How to Love Him,” and you listen to the song you think it is a really pretty song, but once you realize where it is in the story, it becomes that much more important. Same with Pink Floyd‘s “The Wall,” and certainly Alice with “Million Dollar Babies” or “Welcome to My Nightmare.”

Amy: Do you have a favorite Alice Cooper tour story?

Al: I think all of them are my favorite. That was my first real rodeo. He was a great guy. He taught me so much. I enjoyed my time with him. He is quite the golfer, I had no idea. I think, if anything, it’s about seeing their lives off the stage. That was pretty neat to me. I was pretty young back then. I didn’t realize you could be anything but be a rock star.

Amy: Have you had any mishaps with the pyro on stage with TSO?

Amy: Was it with Trans-Siberian?

Al: Yes ma’am. The crew is very slick, me not so much.

Amy: What would you tell someone who may be a huge rock n roll fan to get them to a TSO show? People may think it is more of a family type atmosphere, but it is truly rock-n-roll musicians on stage.

Al: Actually it is a little bit of both. It is certainly good for families. One of the things I am most proud of is that I can look out in the audience and see a ten year old kid sitting with his mom and his grandma and they are all have the greatest time of their life. The family dynamic in this country is a little fragmented. I like to see it come back even if it is only for 40 minutes during one of our shows. When I am playing Mozart’s 24th symphony and people are enjoying the music and then the stage is lit on fire and trusses moving to the shapes of spaceships and fire breathing dragons and getting everybody’s attention, there is a different dynamic. It is a rock-n-roll show; there is no doubt about it. It is one of the greatest rock shows on the planet. We have more pyro, lasers, moving trusses, and we have more video screens on stage. We have more production than anybody out there in the conversation. So there is something for everyone. The fact that families are out there together, at my age, has become more important than anything else.

Amy: Do you still keep in touch with Megadeth or have you checked out their latest record 13?

Al: Always. I am a huge fan of the band. I love seeing what they are up to. On Halloween they dressed up for Jimmy Kimmel. Dave (Mustaine) is one of the smartest and certainly one of the most talented people I have had the privilege to work with and I am a fan of the band. Trans-Siberian Orchestra is something that encompasses all the brilliance yet I can be in a room with Paul (O’Neill) for a longer period of time. We almost lived together. We were neighbors in Tampa, Florida when I am down working with him, which is half of the year and the other half of the year I am out on the road. He is my buddy and my brother. He is the reason I have a job and an enjoyable job. It’s not one of these things where I go to work and I roll my eyes and go “Oh shit, I have to play this stuff again!” He helped me create this. He has let me be part of it. He has let me be part of his family. He is part of mine. There is nothing better and there is nothing I wouldn’t do for him. I pay attention to all the old bands I was working with. But more importantly, the new band I have been in for 17 years is my family, my love.

Amy: Are you part of the arrangement or the composition of the music with Paul?

Amy: Does everybody participate in it or just a few members?

Al: I don’t know if everybody does but anybody who has a good idea, the idea is welcome. Paul and I have a good working relationship musically. His writing partner is a guy named Jon Oliva who is very instrumental in helping create all these things.

Al: I don’t know. Regret is for people who don’t like where they are right now. I am pretty happy where I am. If I had changed one second of one activity in my life then the course would have changed and I don’t want the course changing. Where I am right now is exactly where I would love to be. No, I don’t’ regret a thing.