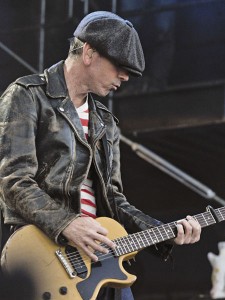 Social Distortion was punk rock before there was punk rock. They revolutionized a genre across America with their unique sound. After 33 years and several  member changes of the group, the soul of the group still remains and their sound still remains edgy and hard-rocking that any audience can enjoy. They have just released their seventh studio album Hard Times and Nursery Rhymes this year that captures the same California punk sound they have portrayed for so long.

Amy caught up with Jonny Wickersham, the band’s lead guitarist before the band’s performance at the recent Voodoo Fest in New Orleans. They discussed how the band stays relatable and strong. They will be playing the Omni in Toledo, Ohio on Friday night November 26th.

Amy: I’m so in love with the new album, Hard Times and Nursery Rhymes, my favorite song on the album is “California Hustle and Flow.” What is your favorite song and can you tell me the story behind it?

Jonny: That could easily be my favorite as well. As a band, we are such huge Stones fans and it’s pretty clearly a Stones riff. How many Stones covers have we done? Four or five I can think of and there is a lot that we do live. That was the perfect opportunity for us to really exercise that. We have been growing, especially Mike and I have been growing over the years as guitar players. It’s like we are trying to emulate our heroes like Keith Richards. Speaking for myself personally, I didn’t have great training in music or anything, and I don’t really necessarily possess that great of a musical ear. It’s more like persistence and practice, and passion for it because I love rock n roll so much. I’m not that great of a guitar player. It’s taken me years to get to the point that where we can do this kind of a thing. It’s real exciting to be able to do that. We are still kind of, in a sense, little kids like we get that excited about stuff like that.

Amy: Are you still having fun after over 15 years? Is it still the best job in the world? 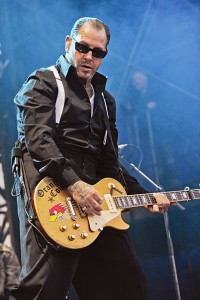 Jonny: Absolutely yeah. Sometimes you lose perspective on that. When you have been on the road for a few months, you are kind of dogged out. Ultimately I am always aware that I am really fortunate to be able to do this and be able to make a living at it. It’s unbelievable.

Amy: What is the most extreme thing you have done to get your music out?

Jonny: I don’t know that we have ever done anything really extreme. It is not like we have ever loaded the gear up on the back of a flat bed truck and cruise down the 101 freeway through Hollywood like some band did last year and caused a whole scene or played on the roof of a building like a couple bands we know. I think it is relentless touring.  Just playing and playing and playing and keeping at it. More than as an agenda or a plan to keep doing this and get it out there it is, “What else are we going to do?” For me, I can speak for myself, this is what I do. I have been doing it my whole life. Hopefully I will be able to keep doing it.

Amy: What is your greatest rock n roll moment?

Jonny: There has been so many that are fantastic and some have happened at a 200 capacity bar and some have happened playing at an arena show or Lollapalooza in front of 70,000 people. I kind of prefer the small thing myself. The greatest rock n roll moments are just the nights when you really lose yourself in the music and you are not aware of anything. You are so in the moment and playing the song. Just to play a power chord feels so right. With the band, the chemistry is there and the dialogue between us on stage is happening and it is intuitive and it’s psychic almost. That is the greatest rock n roll moment for me. There is nothing better because that is what it is all about. It doesn’t happen every night. Sometimes you are kind of in it. Sometimes you are not in it at all. You might be completely distracted by a really bad monitor mix or a bad sounding room or whatever it is. It is truly an organic thing. That is the big payoff, nights like that. A lot of the times that happens when we do some crazy things in a real small place which doesn’t happen very often but I love that. Like no barricade and people are four feet in front of you and there is so much energy in the room. For the kind of music that Social D does, that is what it is all about. 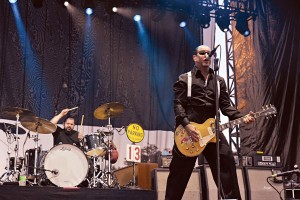 Amy: I know Mike spoke recently about you guys considering a new documentary since Another State of Mind was done so long ago. Are you working on anything right now?

Jonny: We keep talking about it but it will happen. We are not really working on it at the moment.

Amy: What do you think the biggest difference will be?

Jonny: It’s going to be a different story for sure. It is going to be looking back on 30+ years. That was the beginning. I was a little grommet when that came out. I went and saw it, I wasn’t in the band. I was a fan of the band. I remember when that movie came out and I was like, “What a trip?!” 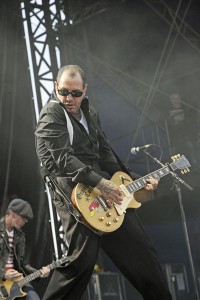 Amy: Why did you join? They have had a lot of changes over the years. What made you choose this band or how did they choose you?

Jonny: A long history that I have with the band. I played with bands that were in the same community and we had played shows together.

Amy: Did you have any trouble assimilating, coming into the band, or any hazing?

Jonny: No, no. I had to kind of really learn to play these songs the way they are played. Although the bands I grew up playing in are, in some respects, similar, they are also, in other respects, completely different. So it was just a matter of that kind of stuff. As far as getting along with people and the fans of the band have treated me, they were very kind and it all has been very good.

Amy: Mike has also spoken at times about there being different dimensions to him and the band other than the music. There is some spiritualism involved. Do you think that comes in to play in the music? Are you guys spiritual in some way or is it all good time, fun songs about life?

Jonny: There definitely is that. These songs have come out of real situations and reflective of real things that have happened.

Amy: There have been really serious, tough times through the years.

Jonny: Yeah, with everybody at different times. They are definitely real songs and I would say some spirituality plays into it. It’s on a personal level for everybody. It is actually what defines what this band is all about, persevering through everything and individuals self-searching and growing and changing and becoming better people. We have been on the edge where it could go either way and it would have been a completely different thing and we wouldn’t be having this talk and the band wouldn’t exist. It would be a completely different thing. 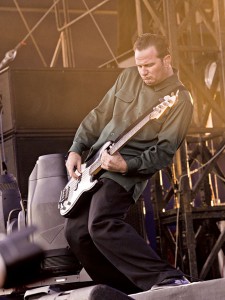 Amy: I think successful bands in life come about with really hard work, a little luck and a lot of perseverance.  This seems to be true with the really long standing bands that I talk to that have stayed together.

Jonny: That is what this music is that speaks to so many people. People that go to work and they have families or they are teenagers and growing up and trying to figure things out. They are older and things happen and I think the music helps vindicate their situation.

Amy: Your fans, I am sure after 30 years you have 30 years of fans. Do you guys finding people bringing their kids now to shows and is that odd for you guys?