Five Finger Death Punch is the biggest and most exciting show you can find in Metal music right now. They are set to release their third studio album American Capitalist which features the popular single “Under and Over It” and the song “Back For More,” featured in the latest game offered in the Madden franchise. They are about to go out on their Fall headlining “Share the Welt” tour with All That Remains.

Amy spoke with lead guitarist Zoltan Bathory and band newcomer and bassist Chris Kael at X-Fest in Dayton, Ohio. The three discussed the upcoming album and why the band’s music moves a more aggressive crowd. The new album, “American Capitalist” will hit shelves on October 11th.

Amy: I want to talk about the new record “American Capitalist,” it’s all over the radio but I actually heard “Back For More” for the first time this past week and I think I like it better than the first single. I’m excited. What’s the story behind that one?

Zoltan:  The interesting thing about that one is, that particular song is on the soundtrack for “Madden 2012,” and we were looking at the record and trying to pick the first single. Basically what we did this time, we kind of wanted to pick something that was not so obvious. There are a couple really nice ballads, a couple really heavy songs, and there is potential for many more songs that are singles. This time, we went with something unexpected, we did this with the first single, the album cover, everything. We wanted to shake it up. It’s funny that you mention “Back For More” because we were going “Which one? Which one? Which one?” will be the first single. We went with “Under and Over It” because we wanted to wait for Madden to debut “Back for More.”

Amy: The new Madden, with the Browns on the front cover.

Zoltan: Some people love the Browns. I am just saying that is the reason we ended up going with this one because we gave that song to them and we wanted them to debut it. Madden debuted that song and then the single “Under and Over It” is out there. So you have two songs that are a little bit up-tempo out there and floating. 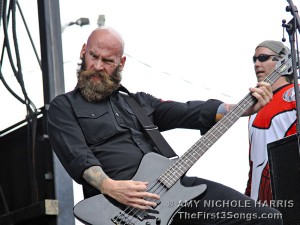 Amy: Let’s talk football for a minute. The reason I ask this, I live in Cincinnati and am a Bengals season ticket holder and at the games they play “Bad Company” constantly so I always think of you at football games. Do you have a partnership with the NFL or do the teams just gravitate toward your songs?

Zoltan: The interesting thing about our band and the mentality we have and the general overall message. Every time that you listen to music, you usually put in a CD that will put you in a specific mood. If you are depressed, you are going to gravitate to music that will speak to that mood. If you are happy maybe the Beach Boys is what you go to for that kind of music. Every style of music puts you in specific mood, and if you look at Five Finger Death Punch, at least I’d like to think, it’s the kind of music that pumps you up or “Let’s go, let’s take it” kind of mood. Most of our fans are already football fans, soldiers, people that are “Let’s get up and fucking do this.” So it’s kind of like our music resonates with people that are ready to go and pumped up, and it’s just football. It’s every Sunday. It’s not just them but a couple different football teams are playing that song.

Amy: I think I heard it in Cleveland as well. 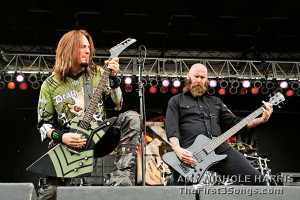 Zoltan: It’s a pretty common song to play in arenas.

Chris: Last night in the UFC fight too. Somebody also waked out to it.

Amy: I know you fight. You have talked about this a lot before. Do you work out to your own music?

Chris: “Under It, Over It” that’s a good stomp, you can time it right to the treadmill. It works out real well.

Amy: You are the newest member?

Chris: I am the newest member.

Amy: How did you come about being in the band?

Zoltan: Tell her the story of how you ended up in Vegas. His car broke down while he was heading to LA. 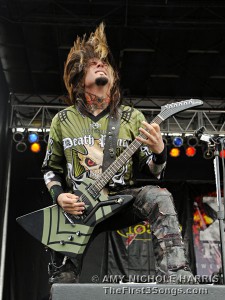 Chris: I got to Vegas about ten years ago, went out there to pursue music, did things for quite a while. I heard they were looking for a bassist through friends of theirs. My old friend from high school is actually their drum tech, Saul.  He has been working for those guys for a little bit now. I heard they were looking so I kept telling Saul, “Get me an audition, do what you can.” So finally, I had been trying and hadn’t heard anything, went to go see System of a Down at the Palms and was watching those guys on the stage and turned around and looked at the stage and it hit me, “If you want it, go after it.” So that night I went home and Facebooked Jason Hook, a real brief message, “I’m your guy. Call me. All I need is an audition.” He messaged me back the next day and asked “How are your vocals?” Other projects I had done before I did lead vocals so I sent him a track from something I had written and was singing on as well. I guess they liked it because I was invited to do the audition. I came in that Saturday.

Zoltan: It’s an interesting thing because when he showed up, it was kind of the audition with the friends of friends, people that we kind of knew. Because you never know what you’re gonna get. You get the crazy person and have to live with him. It’s not just a musical thing that has to click but personally. He walks in, and he is a laid back guy and when I saw his Muay Thai T-shirt, he is a fighter too.

Amy: I’m scared you all are going to get hurt in the parking lot. Look at him, he’s ready.

Chris: That shirt was worn by design.

Zoltan: And I was like, “This guy is a fighter” and he has a pro record already.

Chris: Not a good one though. 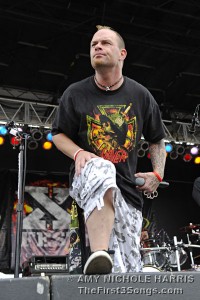 Zoltan: When he walks in, it takes balls to get in the ring. It takes balls. Whoever says otherwise, it is you and the other guy and there is no way out unless you die. So he walks in as a laid back guy and I see the shirt and I ask him, “Do you fight?” He says, “Yeah, yeah.” It’s a hobby on the road touring.

Chris: So he got a work out partner.

Zoltan: You have to have a laid back guy that you can live with on the bus for 300 days a year. I want some guy who is chilled, nice to people.

Chris: Boy did I have him fooled.

Zoltan: No, he sounds awesome. I loved his bass tone. Ivan wasn’t there and we called him, “We got the guy. We got the guy.” That night we went to dinner with Ivan and Ivan loved him too. It was done.

Chris: It was one of those things, it was a good proposition. During the audition, very first song, I felt it. I’m sure they felt it as well. Very first song, right into the chorus.

Chris: Him and Jeremy during the first chorus.

Zoltan: It’s really interesting, musicians know. Some people who are not musicians may not, you have to have connections. It is how bands survive. It is not necessarily about success, not necessarily about music. The first and foremost issue with bands on why they break up is personal, it’s always personal issues. So the bands that never have success and fall out are either about substance abuse issues or personal issues amongst members. So, half of the success is keeping your fucking band together. Therefore, you have to have the right member. He was the right guy. 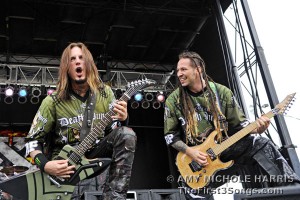 Amy: Have they played any jokes on you yet?

Chris: Not really. It has been pretty low key. There have been a couple little small things. If I told you, I’d have to kill you.

Amy: I am excited about the new album. I look forward to seeing you guys on tour. You guys are going to  be touring again for this album soon right?

Zoltan: The album comes out October 11th. We are really proud of it. It is a really strong album. We are Five Finger Death Punch. We will never try to be something else. We play the music we love.

Amy: Well you guys have a huge fan base.

Zoltan: Yeah, but you have to look at it this way. We played the music that we love and then we got signed. We already had a record before we got signed. We are just lucky that a lot of people out there have similar taste. Really that’s how it works. I can’t twist your arm to like me. I can’t give you money and say, “Hey, listen to us please.” You are not going to. If I give you a free CD and you don’t like it. Because it is free are you going to listen, no.

Amy: I get them every week. I do not listen.

Zoltan: It is pretty much that we are blessed to have so many fans and we are blessed that we love what we do. And that’s what happens. We look at recording as we are the same.

Amy: The new record sounds the same. You are not going to alienate the fans.

Zoltan: We have a bonus CD that has some interesting remixes but those are remixed because they are interesting.

Amy: I have only heard two hard songs off of it so far. Any ballads? Any “Bad Company”?

Zoltan: Yeah we have a couple, there is a song that is called “I Remember” and it sounds like an 80’s ballad out of the book. All of us listened and thought it was really 80’s but it is such a good song that we have to use it. The fans, we love. The haters, I don’t care what they have to say. Listen 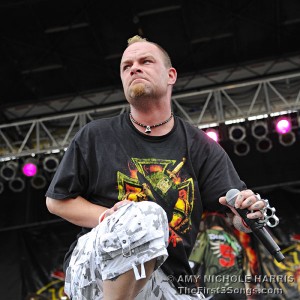 to something else. We play for our fans. We know who those guys are. Everybody else, we don’t care. Do whatever, it’s your life, this is ours. Oh yeah, you got your ballads. There is one that’s a ballad and one that is slower and ballad-y. There are no “Bad Company’s” but it’s not really a ballad anyway. It is not a song that you could call a typical ballad.

Chris: And coming from the outside…

Amy: Did you know every song when you auditioned? You were ready?

Chris: No, for the audition I learned three songs. I came in and did those. He gave me a heads up later in the week saying, “You might want to go ahead and start learning these other ones too.” He gave me the heads up and we got it done. But yeah, the new album…

Chris: I really do, coming in.

Zoltan: We had finished the album by the time we found him. The album was done.

Amy: Sounds like approval for an official external opinion.