Bullet For My Valentine is pure Metal from the United Kingdom nation of Wales. The band was formed 13 years ago but wasn’t signed until the release of their first album in 2005. Their current album Fever is their third studio album and their most popular yet. They are currently performing on the main stage on the Uproar Music Festival Tour.

Amy spoke with lead guitarist Michael “Padge” Paget prior to their show in Cleveland. They spoke about his personal music influences and the memorable moments of being flashed by the crowd at shows.

Amy: First question is, new music status, how are you guys coming along?

Padge: It’s coming along but nothing real serious, just riffs and ideas and trying to figure out the direction of the new record.

Amy: Well you guys have always been pretty consistent with your record sound. I assume you won’t be putting out a country record anytime soon.

Padge: No, no. It’s going to be like the Fever II. It definitely won’t be a follow-up to The Poison or Scream Aim Fire. It will be definitely, naturally, I guess closest to The Fever.

Amy: What is a typical day like for you?

Padge: We wake up, coffee, shower, some lunch I guess, drink some water, do some press, warm-up for the show, do the show, and just have a few drinks after. 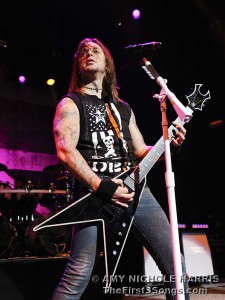 Amy: Do you guys go out after the show?

Padge: We did last night, yeah. There were just a couple bars nearby so we just went there.

Amy: What is your drink of choice?

Padge: Corona for me, or whiskey if I want to get real…

Padge: No clear liquors are bad. I can’t drink that shit. It makes me go weird.

Amy: I know you guys started listening to Nirvana and Metallica influences growing up. Who would you say currently is a musical influence on the guitar specifically?

Padge: Still the old school heavyweights for me. Definitely Dave McDowell, an amazing guitar player, just inspirational. He’s like the Hendrix of the netherworld. Stevie Ray Vaughn, but I wouldn’t take the blues approach.

Padge: No. No Steve Vai. No Satriani. 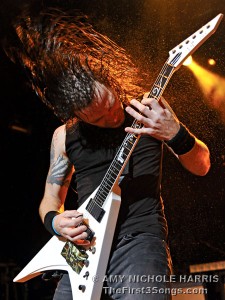 Amy: Really? I just heard a Metallica interview with Lars the other day. He was talking about how he went back and took lessons after their first album. He and their guitar player went to Satriani. Joe Satriani and his drummer trained them after their first record came out because even with a huge hit record they couldn’t play properly. It was amazing to hear that.

Padge: I’d love to have lessons off someone as long as it was confidential.

Amy: of course this is 30 years later for Metallica so it is easier to discuss now.

Padge: I’d love to have an intense lesson with the guitar player of choice.

Amy: Who would you choose?

Padge: These days, alive? Slash would be cool. Marty Friedman would be fun.

Amy: Most of the band, you have girlfriends and wives. What is the secret to keeping that relationship strong while you are out on the road?

Padge: I think with us, fortunately we had girlfriends before we got signed, you know. I think that’s the main thing with us. 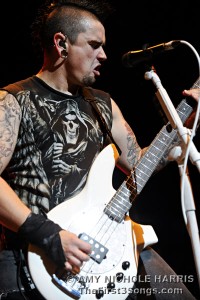 Amy: They have been around the whole time?

Padge: Yeah, pretty much. They have come to know each other as well because we come from a small town back home.

Amy: Do they come on the road?

Padge: Yeah, two are out right now, our bass player’s girlfriend and our drummer’s new girlfriend. She’s really cool as well compared to the other one.

Amy: You guys are from Europe, Welsh, do you typically date girls from Wales or do you venture out and pick up Americans occasionally?

Padge: No, we stick to our girlfriends who have stuck with us for many years. 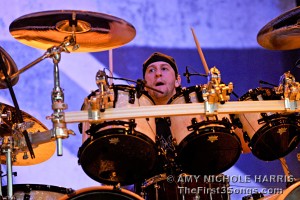 Padge: Rock on the Range, no, I always remember the show. It’s always a great day. Just the boobs, there’s loads of boobies. The girls always have their boobs out which is always fun being a dude? 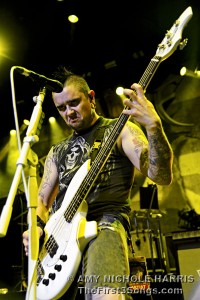 Amy: When you are playing, do you see what is going on with the photographers in the pit and with the crowd? Do you actually know what is happening or do you try not to look at that?

Amy: Do you notice the crowd? Does it ever distract you?

Padge: I won’t say distraction but you know that it is there. I may have a little bit of smiling and laughing during the show sometimes which is not good.

Amy: Why is that bad?

Padge: Because we are a serious band.

Amy: But you can have fun.

Padge: I do have fun. That’s why I laugh and smile.