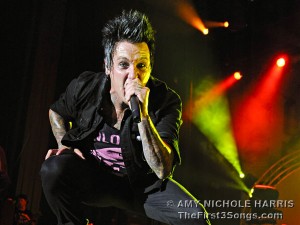 Papa Roach is considered one of the hardest rocking, most over the top shows in the music business. The Grammy nominated group continues their big attitude show on the “Rock Allegiance Tour” with Buckcherry, Puddle of Mudd and others. They are promoting their album Time For Annihilation, their seventh studio offering.

Amy spoke with frontman Jacoby Shaddix right before their show in Columbus on Wednesday night. The two discussed the bands continued popularity and how social media is used by the band.

Amy: I spoke to you a year ago this week. I looked back at the interview right before X-Fest. I could tell the date because you were singing the brand new Cee-Lo Green “Fuck You” song to me.

Jacoby: That’s funny. I was probably smoking that weed.

Amy: When I spoke to you last year, your album had just come out, Time for Annihilation, so you guys are still rocking that album. What have you been up to in the last year?

Jacoby: Just touring. We have been to Europe multiple times, a few American tours and just having a good time supporting the record. Plus, we wanted to go out and prove with this record we could be a valid rock n roll band with an independent record company. That was the point of doing the EP mixed with the live album and just getting right back out on the road. It’s proved to do really well for us in Europe especially, it’s cracking off the fucking hinges. We actually do better in the UK and Germany than we do in America.

Amy: A lot of hard rock bands do that I have talked to.

Jacoby: The hard rock scene is just way more alive over there. It seems like Americans are into hard rock but it’s not as passionate.

Amy: I know you guys did Sonisphere and several other European festivals.

Jacoby: That shit was legendary. We killed Sonisphere like to death.

Amy: Do you prefer the festivals or the headlining shows?

Jacoby: I like both of them. The festivals are awesome over there because you get to hang out with dudes from Rammstein, (in German accent) ‘we talk about the things we do in Germany together.’ Hanging out with those guys and my boys in Skindred. It’s a cool way to cross paths with a lot of people you haven’t seen in a long time. Then also the headliner gigs, we did one at Brixton Academy, which is like a legendary venue in the UK and it was like 5000 people going absolutely fucking bananas the whole time. When you step off the stage from that, dude that’s my drug of choice.

Amy: I see you guys on Facebook all the time, is that really you? 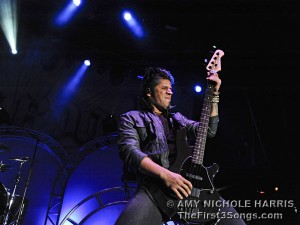 Jacoby: Yeah. We have the business stuff that gets put up there like “Tickets Available at,” that’s not me but the photos and the quotes of the day and the updates like that is us.

Amy: I just didn’t know. Some bands say it is never them.

Jacoby: I type in all caps a lot of the time so you can know that’s me.

Jacoby: Top five things… 1. We get to headline. Well, we are co-headlining with Buckcherry but still we get that co-headliner credit. 2. We get that good pay which is nice because this is my last tour. I am about to take some time off. 3. Just the camaraderie amongst the bands, the after show parties and stuff is just like parking lot ragers. What else do I like about the tour? I can’t really say I like the catering. The catering usually sucks on this tour. 4. The road crew people we are working with are cool as fuck. Our production manager, this guy Murph, the Ayotollah of Rock n Rolla. I love that guy.

Jacoby: The fans come hand in hand with just being able to play the show live. They know they are fucking awesome. Now I have to pump their ego even more make them feel like they are that much cooler. Ok 5. The Fans.

Amy: You guys working on any new music yet?

Jacoby: Oh yeah. Right on this thing. Just plug in to that. (Pointing to his Mac Book)

Amy: I’m sure we will get a sneak peek right now. 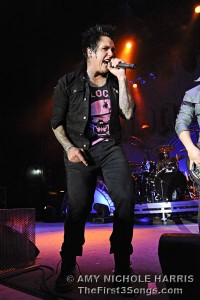 Jacoby: No. Will not do it. The jams, the music is sick. We want to separate ourselves from the pack again. When we came out in ’99 and 2000, we were like part of an underground movement and then that was really cool. Then that movement kind of fell apart and there weren’t many bands still out there doing it. So we evolved and separated ourselves again and evolved into more of a rock band. Now we have been lumped into all these rock bands and we are like, “Cool we like that. We like that sense of community in rock.” But I want to evolve it into something more even of our own sound.

Amy: Are you going back to rapping?

Jacoby: I wouldn’t necessarily say that is the move to make it creatively original. I just think the music we have been listening to, we have been listening to everything from honkytonk country music to electronic music to heavy metal to punk rock. I don’t want to make an average white guy rock record. I want to make a fucking record that inspires people to fuck, fight, love, forgive. An inspiring album that makes people want to move, makes people want to do something.

Amy: What are we going to see tonight? What’s your favorite song to perform live?

Jacoby: “One Track Mind,” that’s my fucking favorite one. That’s actually going to be our next single off this record and it’s just got that tempo. Electronic music, there is just that pulse, that boom, boom, boom, boom. It’s got that bounce tempo.

Amy: So you’re going to jump?

Amy: You know I’m the photographer and you know we hate your constant jumping.

Jacoby: It’s late in the set. Just put your fucking camera down and enjoy the song.