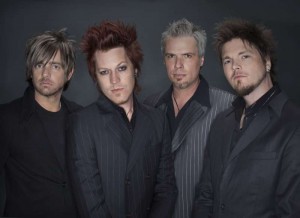 Crossfade has found their path back to the mainstream rock music. They are currently out on the “Rock Allegiance Tour” with super acts, Papa Roach, POD, Buckcherry, and Puddle of Mudd. They disappeared from the music scene after great success with the hit singles “Cold” and “Colors” in 2005. After a three year hiatus, they have returned with the album We All Bleed in the summer of 2011.

Amy interviewed bassist Mitch James prior to their show in West Virginia yesterday. They discussed the band’s comeback trail and their “Behind the Music” moments experienced in their career. They will be performing at The Lifestyles Communities Pavilion Outdoor Amphitheater this evening in Columbus.

Amy: I talked to Les and saw you guys at Rock on the Range recently and I know you that you came through Dayton, Ohio with Pop Evil this summer. Do you have any crazy Ohio stories?

Mitch: We have played in Ohio a lot throughout our career and it’s always a great state for us. Everywhere we go we have good turnouts and lots of old fans we have seen over the last seven or eight years. Nothing crazy I can pinpoint on Ohio in general but definitely super fans and every time we go we seem to have lots of fun. Maybe that is why I can’t remember.

Amy: That’s always a good sign when you can’t remember where you have been.

Amy: I got the album, a preview of the album before Rock on the Range. Back then Les said, “You have to listen to it ten times to love it.” So I have listened to it over and over this summer and the song I gravitate to is “Prove You Wrong” and I was just curious about the story behind that song or in general any stories you have about the album.

Mitch: Oh yes, “Prove You Wrong” we started writing that long ago when we finished touring off the second record. It started as an acoustic song that “Some days are worse than others, Some days you can’t feel a thing.” I think immediately we kind of figured out what we were going to do with the song. As far as the message behind it, it is to let people  know that although we have been gone a long time, it is our way of letting everybody know we haven’t fallen off the face of the earth and that we are stronger than ever. Once we had that little melody in our heads, Les kind of took the reins on it and made it an acoustic song. We wrote the lyrics around Les and it was a group effort by all of us. It is actually going to become our second single in October so I am glad you like that one. 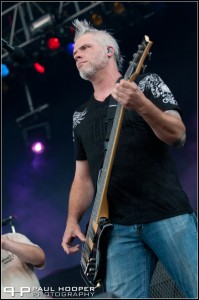 Amy: Well that’s exciting because I always try to pick the next single. I am excited I got one right today.

Mitch: We actually filmed the video on our break about a month and a half ago. A lot of it will be animated slash live shots of the band. The whole concept is around the animation and the treachery and different things in the character’s way like snowstorms and walking through jungles and coming through to the concept.

Amy: The song is more about the band trying to prove something rather than talking about an individual person.

Mitch: Everything has a second meaning but certainly it is a band concept but it is all of us personally in the band having the same outlook so it is a little bit of everything, the band as a whole and individually conquering our demons and getting away from things that didn’t help us personally.

Amy: You have been in Crossfade for 11 or 12 years, if you could go back to when you first started out in the band and tell or warn yourself or the band about one thing, what would it be?

Mitch: I don’t think musically it would be anything. I think our path has been what we have wanted it to be as far as songs we put out. I think it is more about the business, things we had to learn the hard way over the last few years with money, with management, with all the things we have little control over like losing money and stupid things because we didn’t know better. It is definitely the outer part of the business that I would warn myself about. Maybe be more informed because I think we missed out on a lot of opportunities being new and letting people take advantage of us. We certainly learned a lot since then and I think things are in our grasp that weren’t ever before.

Amy: We know you are from South Carolina, you still have a little bit of the accent. What do you miss the most when you are out on the road?

Mitch: I have two daughters and a girlfriend. I think, being home for over three years without being on tour and having to do this again is tough on everybody. When I do get to go home for a day or two or a week at a time, it is almost bittersweet because by the time you get comfortable back at home you have to deal with all the goodbyes and the crying and the things that are very hard when leaving. After being home a couple days, it is almost not worth it to have to start all those feeling back up again.

Amy: Do you watch Behind the Music?

Amy: If you had a Behind the Music story, how would it start out or what would be the highlights of your career that you would talk about?

Mitch: Basically, the rise of our band through all the adversity that we fought with member changes and having a huge hit on the radio in 2004 and almost a year after that we were still working jobs because we couldn’t afford to go on the road. There is always the guy that starts talking about the down parts of the career. I think that was after our second record when we got dropped by our label and Ed kind of went into a downward spiral and was very depressed and wasn’t on his game. That’s why it took us so long to put out this record. We had to go all the way down to rock bottom before he could create this album which I think is a concept that is widely spread across the record, seeing how a career has come back from the ashes. Like a Phoenix rising from the ashes.

Amy: What can we expect from the show tomorrow?

Mitch: We only have a 30 minute set because we play early and it is such a huge tour with good bands. We are out here to promote our new record so we definitely play as much of our new stuff as we can but you can’t leave the crowd wanting so we have a lot of our old hits peppered in as well. We play 7 or 8 songs as quickly as we can and try to get a few new fans along the way.

Amy: So not much talking, lots of playing.