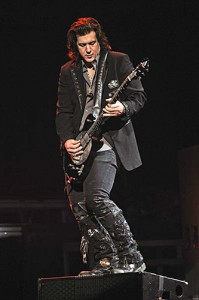 Buckcherry is one of the highest energy, high profile rock groups touring the nation. They are out on “The Rock Allegiance Tour” promoting their fifth studio album, All Night Long, which was released last year. They saw their biggest success with the popular and heavily censored hit “Crazy Bitch” in 2006. Then they scored their first Billboard top 10 hit with the power ballad “Sorry” in 2008.

Amy spoke with lead guitarist Keith Nelson yesterday to preview their show tonight in Columbus. The two discussed the tour and how life on the road has changed over the years. Buckcherry will be performing at The Lifestyles Communities Pavilion Outdoor Amphitheater this evening with Papa Roach, Puddle of Mudd, P.O.D., RED, Crossfade, and Drive A.

Amy: Let’s talk about the  the “Rock Allegiance Tour.” You guys have been out for quite a while touring on the new album All Night Long this year. You have been out with Papa Roach many times and I have been seeing some fun Facebook photos this week from them. It looks like everyone is having a good time. What has been the highlight of the tour so far?

Keith: Of this tour, it is being around a bunch of bands that we know and that we dig. It has been really fun re-connecting with the P.O.D. guys. I have known those guys for years. Papa Roach are old friends of ours. We have done a lot of tours together. So “The Rock Allegiance Tour” has been lots of fun. It is really great to be a part of something where we can make it affordable for the fans.

Amy: You guys have been touring and been a band for 15 years. How has life on the road changed from when you started to now?

Keith: Well, we have had the good fortune of becoming more and more successful as the years have gone by so the accommodations are a lot better and we really managed to reach more countries than we ever have. We have been to 18 or 19 countries on the tour for this record. It is fun watching it grow as the business changes. We are taking our fans with us and picking up new fans. It is really exciting.

Amy: I know everybody is wondering if you are currently working on any new music while on tour with All Night Long? 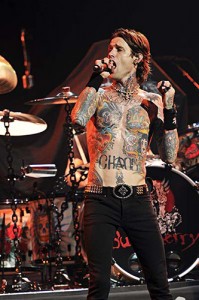 Keith: We are putting together ideas right now. We will probably work on something over the winter and try to have a new record in spring or early summer next year.

Amy: I know that you recorded and co-produced All Night Long at your house in your home studio right?

Amy: Do you guys plan to do that in the future? What are the pros and cons of doing that on your own and not at the formal studio setting?

Keith: It’s nice to be able to do it at my place because time doesn’t really become a factor. You have a lot of other issues when you are going into a commercial space trying to make a record with budgets and time. That kind of does not become a factor for us. It allows us to really concentrate on the music and get it right or get it to a place where we dig it.

Amy: Have you been producing any other bands lately?

Keith: I have been so busy with Buckcherry with every bit of my time.

Amy: I also read in an interview that you have 85 guitars. Do you have a favorite?

Keith: I have a few favorites. There are always a few that you will have to bury me with. I do have a handful of guitars that are my favorites.

Amy: Do you play with them or keep them safely stored away?

Keith: I keep them at home but I use some of them on the record. I don’t tour with many because they are vintage guitars. The way vintage guitars have become collectible and the price on them has gone up ridiculously it doesn’t make much sense to take them out and play them every night. 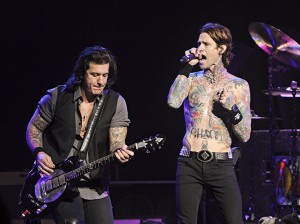 Amy: I have been talking to quite a few musicians that lost a lot of guitars in the flood in Nashville last year. It’s been kind of a heartbreaking discussion. I am sure that is the worst case scenario for you.

Keith: You hear stories like that all the time, stuff ends up missing and stolen and broken and destroyed.

Amy: I know that on this record Josh (Todd) tried to write cleaner lyrics. There is no explicit warning on it this time. Do you think this will continue onto the next record?

Keith: I don’t really know. I think it really depends on the subject matter that we tackle. I guess that’s really it. Sometimes there is no other way to say something without getting a sticker put on your record. There are ways to craft around that. We’ll see. I don’t think there are any parameters that it has to be one way or the other. I guess we’ll see what happens.

Amy: I kind of miss the “Crazy Bitch” type lyrics. I think it is a good “girl anthem” in general which is kind of funny.

Keith: You know it is very much because so many women have embraced that song because it is something to be celebrated.

Amy:  What can we expect from the show tomorrow?

Keith: You know, just high energy rock n roll. We have a lot of fun with what we do and I can rest assured that when you see a Buckcherry show, you are seeing five guys playing the music. We are not playing to any backing tracks or pre-recorded anything. It is just five guys doing what we do. I think that is what makes it unique and special.