Adelitas Way is on FIRE! 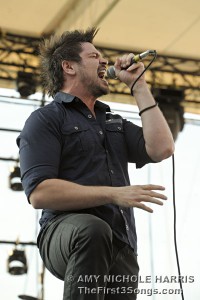 Adelitas Way is a Las Vegas based rock band that has skyrocketed through the ranks and charts in the last year. Their second studio release Home School Valedictorian hit music shelves earlier this summer and the first single “Sick” reached number one on the active rock charts in the US. They are currently on the Carnival of Madness Tour with Theory of a Deadman, Alter Bridge, Black Stone Cherry, and Emphatic.

Amy spoke with front man Rick Dejesus prior to their show at the Kentucky State Fair in Louisville. They discussed the band’s growing success and how he survived being set on fire during a video shoot. Adelitas Way will be performing in Dayton on September 18th at X-Fest.

Amy: I just wanted to start out by talking to you about the new album. Homeschool Valedictorian came out this summer. Can we look forward to seeing you perform new songs live. What songs are you going to be showing us today?

Rick: The number one thing about us live is we have a lot of energy and we really, really try to push it. Everything we write on the record we try to make it that much more exciting or bigger in our live performance. We play “Sick” off the new record. We play “Collapse.” We play “I Wanna Be.” That’s pretty much the new stuff we at the show. We also play some of our older songs so people who aren’t familiar with us and haven’t been following us get their taste of it. We play “Invincible.” We try to mix it up with new and old.

Amy: I know Tyler Connelly performs on your new album. Is he going to be coming out on stage with you today?

Rick: Not today but somewhere on tour it will definitely happen.

Amy: Maybe in Dayton we can look forward to that. 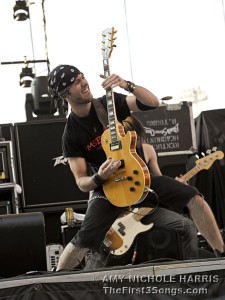 Amy: I was listening to the new album this week. I remember seeing you guys live about a year and a half ago at Rock on the Range and I always liked the song “Invincible” but I really have to say that I am a lot more drawn to the new album and the songs that you have this time around. In the video “Sick” they set you on fire by accident didn’t they? Were there any scary moments when you filmed that video?

Rick: Oh yeah. I guess things aren’t exciting unless you get set on fire. I was definitely, I don’t want to say panicked, because I didn’t really get too afraid but it was an intense video. We were all trying to rock out and get our emotions into it. I guess I rocked out a little too hard and fire got me. It wasn’t fun. I had my hair, my eyebrows, my eyelids, all set on fire.

Amy: Well, we are all glad that you are ok and unharmed. Getting back to the new album again for a second, I guess my two favorite songs on the album were “Alive” and “Good Enough.” Could you tell me the story behind one or both of those songs?

Rick: I think they are both favorites of mine on the record. “Alive” is just about having someone in your life that makes you feel new again, that makes you feel great, they make you feel like you’re young and exciting. It is one of those feelings where you know there is something special about that person when you are around them. “Good Enough” is pretty much about how you can never win no matter what you do with some people. No matter how hard you try, you can get them a dozen roses or something nice, you try your hardest but it always falls short. It seems like you do something wrong. 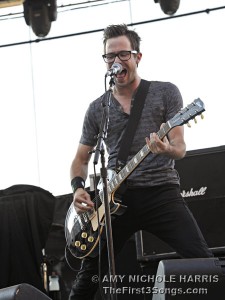 Rick: Of course. A lot of them do know. I’d say almost every song that I write somebody knows it is about them. There is a line of people.

Amy: Some are good and some are bad I would say.

Rick: Exactly. Some are happy about it and some are pissed off at me.

Amy: You have toured over the past couple years with all the current best rock bands around with Theory of a Deadman, Sick Puppies, Shinedown, Halestorm. Is there really a dream tour you could put together to be out on the road with?

Rick: I just love them. They are just a band growing up I listened to. Metallica, as well, those are two bands that inspired me a lot. I would love to play with them.

Amy: A lot has changed for you guys in the past year with the new album coming out. What has been the biggest change for you guys as a band?

Rick: A year and a half ago, we were so battling to get people to know who we were and driving around in a van and just really, really working towards getting our name out there. Now I feel like more people know who we are and we have come a long way from where we were. Now we are something people want to see.

Amy: What is the best and worst thing about being on the road all the time? 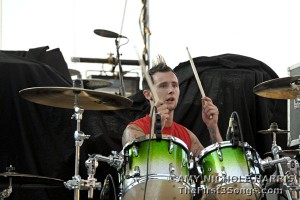 Rick: The worst thing is simply some of the food. Some of the food when you are stuck in the middle of nowhere and you don’t have your family. It is the worst. The best is you sleep late. You go out. We are all friends out here having a good time playing for the fans.

Amy: I know you are one of the married ones in the band. Does your wife ever join you on the road? Is it hard to be away? How do you keep your relationship strong?

Rick: I try not to be away. She comes out a lot. I try to get home between tours as much as possible. You try to do the best balancing act you can.

Amy: Well we look forward to seeing you.

Rick: We are going to throw down and have a good time.