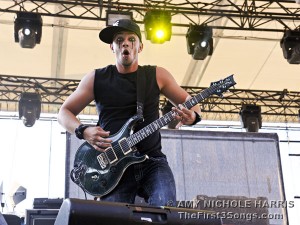 Emphatic is a rock band from Omaha, Nebraska that is making waves within the music scene. They have just released their debut album Damage. They have seen great success with the single “Bounce” which has flown up rock charts. They are currently on the Carnival of Madness tour gaining new fans every night on the road.

The band is currently on tour without their lead singer Patrick Wilson due to a vocal chord injury. Grant Kendrick of Omaha band, The Wreckage, is standing in on vocal duties and holding his own with the band until Wilson recovers and can re-join the band on the road.

Amy spoke with founding member and lead guitarist Justin McCain at the Kentucky State Fair in Louisville before their performance. The two discussed life on the road and his personal stories that influence his songwriting. The band is sure to be headed in the right direction learning everyday from their tour mates Alter Bridge, Black Stone Cherry, and Theory of a Deadman. You can see Emphatic and the Carnival of Madness at X-Fest in Dayton on Sunday September 18 at the Montgomery County Fairgrounds.

Amy: You guys have had a big year. What has been the biggest life change you have had in the last year?

Justin: I would say just being on the road so much. We have been on the road more this year than any other. It is something that we definitely wanted and we are out here playing music everyday so we are very lucky.

Amy: You have been out with the COM tour for a few weeks. Any crazy stories so far?

Justin: No, you know what, there are no crazy stories you can probably print but we do have four weeks left.

Amy: We can print anything.

Justin: Nothing too crazy. We get up on stage and we like to kick ass and do what we do. Believe it or not, we are fairly tame offstage.

Amy: You guys came through with Pop Evil to Dayton and did some shows last month. You probably don’t know where you are at any given time. Do you have any fun Dayton or Cincinnati stories from tours in the past?

Justin: I know we have been to Dayton a couple of times and it has been great every time. Our rhythm guitar player, Lance, actually lives in Ohio so he has some family around there. We always have a good turn out and good time there. It’s always a good time.

Amy: I have been listening to the album. I know you write most of the songs yourself. My favorite was “A Place to Fall.”

Amy: Can you tell me the story behind it?

Justin: “A Place to Fall” is such a special song to me and I think it can be relevant to so many people in the world. It’s basically a story about that person in your life that tries to always be the caretaker or the helper, the one to carry all the weight on their shoulders. It is telling that person it is okay to let go sometimes and let me take care of you now. That is why the chorus is “if you need a place to fall, fall into me, because I am there for you too.” 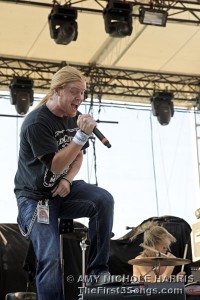 Amy: If you write about somebody special, do they know?

Justin: To be honest with you, that song, I think is for wives and mothers out there. My mother definitely inspired that song. My brother was killed years ago by a drunk driver and my mother was the glue that held the family together. It was absolutely crushing for her and the whole family but at the end of the day it is important for everyone to be there for each other. So that was my way of saying that it is your turn to let go.

Amy: What inspired you to get into music originally?

Justin: My parents. The funny thing is that they are not musically inclined whatsoever. There is no musical talent in my family. In fact, there is probably anti-talent when it comes to music. But they are very, very supportive. One thing I can say is music was always around in my house. Nobody played any instruments but my parents always had music going, AC/DC and Bon Jovi and stuff like that in the house. It really kind of turned me into a rock guy from the time I was a little baby. That is what really inspired me to pick up a guitar. I actually picked up a broomstick first. I’d set up different toys and play the drums, and play the broomstick. My parents saw that and said, “Let’s get him on guitar.” I am very grateful for that because it became my life.

Amy: What is one thing that no one knows about Emphatic?

Justin: I would probably say that we are a bunch of big time dorks. There’s always this clichés with rock bands that they are badass and so cool. We are just normal, regular guys that are extremely happy to be doing what we love to do and extremely grateful and we want everyone out there to be a part of it. We call it the Emphatic Army. We are recruiting everyday. Just know, we aren’t very special. We are pretty dorky. So come join our dork club.

Justin: Actually that is my band in the background so we are listening to that right now. They are playing the CD, I think. Honestly, I don’t really listen to music which is ironic because I am in the music business. I try to keep an open mind when I do listen to music. I usually listen to something like Lil Wayne or Ke$ha, or modern rock, I love modern rock. I love Skillet and stuff like that. A lot of people say classic rock or the roots. For me, it is either a band like Korn, Skillet, Shinedown or it is something like Lil Wayne or Ke$ha. I even like country. I am a songwriter so I’ve always tried to keep an open mind.

Justin: Said goodnight and I love you to my wife.

Amy: That’s really nice. It’s not the typical answer. We look forward to seeing you guys. You have the new album out Damage and I love it. The other song I like was “Do I.” I love “Bounce” and I am sure everyone likes “Bounce” at this point but I try to pick the next hit. What is “Do I” about?

Justin: “Do I” isn’t about a specific or event. It is more so about my perspective about someone. It is kind of like a story. I wouldn’t say it is fictional but more of an outside perspective. It is about a badass guy that is sick of putting up with the world’s crap and finally snaps and says “Nothing is going to hold me back.” Do I walk the valley or do I walk alone. It is coming to the realization that you can’t be held back in life anymore and no matter what comes your way you have to go take it head on. 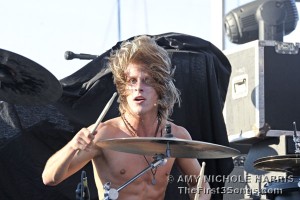