SAFETYSUIT is a Nashville based pop/rock based formed with members Doug Brown, Dave Garofalo, Jeremy Henshaw and Tate Cunningham. The group formed as college friends in Tulsa Oklahoma and went on to have hits like “Someone Like You” and “Stay” off their first album Life Let Go in 2008. The group is ready to release their sophomore album These Times on November 1 and will be giving Cincinnati audiences a preview of it when they hit town on Saturday performing with The Script at PNC Pavilion at Riverbend.

Amy caught up with drummer Tate Cunningham to discuss working with Ryan Tedder of One Republic on the new album and the upcoming show in Cincinnati with The Script on Saturday.

Amy: I wanted to talk you about the new album. Can you tell me about the first single “Get Around This” and a few of the influences behind the album?

Tate: “Get Around This” was our first single off the album, but we recently switched labels to Universal Republic and are starting fresh with the new single, “Let Go” that will be released on Tuesday, September 20. We did “Let Go” with Ryan Tedder from One Republic. Ryan, Doug and I went to college together in Tulsa so we have known him for many years and he is a great friend. As you know they have done well for themselves and we have kept in touch over the years. We were very excited to finally have the right opportunity to work together. We went out to Denver and co-wrote the song with Ryan called “Let Go.” It’s really a straightforward Pop song and really stays current sound wise with what is going on in radio right now. It talks about whatever is going on in your life to really let go and make it happen.

Amy: You guys had a very successful first album with singles like “Stay.”  Was there a lot of pressure on you as you developed and put together the second album?

Tate: Sure, there is always a lot of pressure. The music business today is very different than it was even 5 to 10 years ago. The labels have changed and they are not making as much money so they are very hesitant to make investments because everything is a huge risk. So for us to have the opportunity to do the second record is really exciting but there is a lot of pressure. It has been three years since we put out our last album. We are not the biggest band by any means, but we have caused a stir and we have a lot of fans out there and we do not want to let them down. This record definitely has more Poppy elements to it compared to the first one but it still has a lot of the “Life Left to Go” vein in it with a lot of rockin songs on it. We feel like we have evolved as a band over the past seven years so we feel like our sound has also evolved.

Amy: Where did you record the new record?

Tate: We recorded several places. We produced a few of our own songs and recorded those in Nashville. We worked with Howard Benson in LA on a few. We did a few songs in Denver with Tedder and we also did a few tracks with a team in New York called Espionage. We hit every major recording market in the US.

Amy: You guys are from Oklahoma and met at college, so how did you decide to live and work out of Nashville?

Tate: Originally, we met our management team there and the cost of living was very appealing to us compared to New York or LA since we were straight out of college. They also had a growing rock scene there where we could stand out compared to LA or NY where there are a million rock bands. 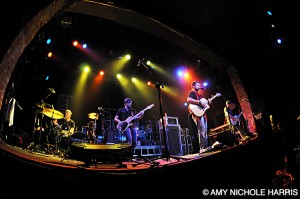 Amy: When you think of Nashville, you think country music so it is easier to stand out as a rock band there.

Tate: People do think of country but in reality Paramore, Matt Kearney and other bands are also from the area. Nashville is also a very central location to tour out of with access to the mid-west, south and east coast versus being across the country in LA.

Amy: What music are you currently listening to? 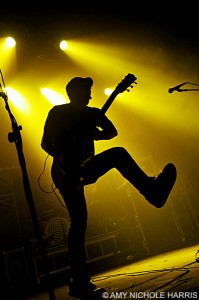 Tate: We are really all over the map individually. We like a lot of different styles of music from hard rock like Filter to Sting to classics like Bruce Springsteen.

Amy: I read recently that your band motto was “Love Life, Work Hard, Try to Make Great Records, Have Even Better Live Shows.” I agree that when I saw your live show it was great and you sounded as good or better than your record the last time you were in Cincinnati. Why did you guys pick this motto?

Tate: To be honest that is a point of pride for me and it is something we strive very hard to create. I remember growing up and there was nothing worse than loving a record and going to see a band live and it not being the real deal and being let down. We work very hard to replicate and re-create what you hear on the record live and possible beat the sound. That’s what it’s about for us- Real band creating real music versus lip synching which is popular these days. We want to try to be as authentic as possible so live shows are very important to us.

Amy: What can we expect from the show Saturday night with The Script?

Tate: We were out with The Script in May and it is fun to hook back up with them for these shows. It has really been the first time we have played with a band that is more our demographic. We love and have toured with bands like Seether and Three Doors Down but our music is more poppy so it is a much better fit to be on tour with a band like The Script. We are very excited to get our new music in front of those fans that love Pop music. We will play a few of the new songs off the new record and old hits as well. It is going to be a lot of fun.

Tate: Yes. November 1 is the date.