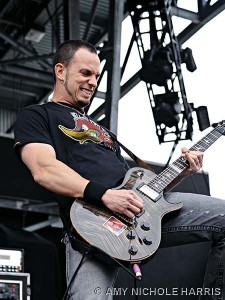 Alter Bridge is a hard rock band formed by Creed members Mark Tremonti, Brian Marshall, and Scott Phillips alongside their lead singer Myles Kennedy. The band released their third studio album in 2010, aptly named ABIII. The album features their first number one hit “Isolation” and debuted in the top 20 the week after release. They are currently on tour with Theory of a Deadman, Black Stone Cherry, Adelita’s Way, and Emphatic on the Carnival Madness tour.

Amy spoke with guitarist Tremonti to preview the tour coming through the area in Louisville and Dayton. They talked about the band’s writing style and his future ventures including the future of his solo career and other headlining band Creed. Alter Bridge will be playing the Kentucky State Fair in Louisville Friday night and in Dayton, Ohio as part of X-Fest in Dayton on September 18 with the rest of the acts on the Carnival of Madness tour.

Amy: I’ve seen you play several times in Creed and with Alter Bridge most recently at Rock on the Range. I love you guys in both bands. I know you write a lot of music with Myles and for Creed as well. Do you have a different writing style when you are considering the different vocals between Myles and Scott?

Mark: No, when I am writing, I am writing whatever I am feeling at the moment. Then later on I will go through and categorize stuff after the fact and kind of organize ideas once I have gotten out of the moment.

Amy: Do you write it by yourself?

Mark: Yeah, I have to be by myself when I write. You can’t really open up with anybody around really when you are writing. You have to allow yourself to make mistakes and sing off key and do all those things to create a song.

Amy: You guys have had a ton of success with ABIII. It is one of my favorite records from Rock on the Range this year. I talked to Myles at the festival and asked him about “Ghosts of Days Gone By”, but the other song I really love on the album is “Slip to the Void.” Can you tell me a little bit about the story behind that song?

Mark: Yeah, that was one that Myles came up with the intro for it and I just fell in love with it right off the bat. I wrote the guitar riff behind it from the very first moment I heard his part. It was about a year and a half before we really got back to the song. When we got back to it, we almost didn’t put it on the record because it seemed like we just couldn’t complete it. When we had the record ready to record we still didn’t have “Slip” on the list and I think I made the point that we really needed to get the song on there. I still think Myles is a little unhappy with parts of it but I love it. I’m glad we finished it and it’s the lead off track on the record and it’s what we start sets off with live.

Amy: I talk to a lot of guitarists and I love a great guitar riff on an album. A lot of the guitar players I talk to seem like it is almost like a religion for them. They go to bed playing and they get up playing in the morning. I was curious to see what is the longest time you have put the guitar down?

Mark: Probably the last time was when I went on vacation with the family. You leave for a week and you don’t touch it. Sometimes it’s good to do that. You over work your hands and you keep breaking down all the muscles in your hands. Sometimes you come back and you bounce back much stronger.

Amy: So you play every day then?

Mark: When I’m on tour, I’ll play as much as I can. When I am at home I don’t get to play it much, maybe an hour or so a day. I have my two sons and a wife that take priority when I am at home.

Amy: Have you guys started to work on new music yet? I know this album is still going strong and getting a lot of radio play.

Amy: I know you have also been working on a solo project as well. How is that coming along?

Mark: It’s coming along great. I just finished writing the lyrics two days ago. I’ve tracked all the drums and all the bass. I have sang half the record and have to go home during the next break and sing the other half and track all the guitar solos, then it will be done.

Amy: When can we look for it?

Mark: I plan on getting some of the first tracks out around January or February. We are going to try to do a different release. We are going to try not to release all of the record at once but try and let people digest a couple songs a month and then release the whole thing after four or five months. We will have like two songs a month and then the whole thing plus a couple bonus tracks when it is all done.

Amy: Would you ever consider touring alone to support it or are you still sticking to the other two bands?

Mark: It depends on how well it does and how well it is received. I will take it from there.

Amy: what has been your craziest Carnival of Madness story so far?

Mark: It has not been crazy at all. It has been like a big cookout out here, just a bunch of friendly people. It’s a very easy tour. We only play for an hour a night. Most days I just get to play guitar all day and all night hang out with good people. It’s been a breeze.

Amy: After you guys finish Carnival Madness, I heard you talk about you are going to go on tour for a little bit with Van Halen in Australia…

Mark: It got cancelled. The Soundwave Revolution, the whole tour got cancelled down in Australia. So now it is up in the air as to what we are going to do.

Amy: I know you are good friends with Eddie and Wolfgang (Van Halen) as well. What has been your most memorable experience working with those two or just being friends with them over the years?

Mark: Back in the Creed days, we opened for Van Halen a few times and Eddie had given me a guitar. It blew my mind of how generous he was with that. Years later, it turns out that Wolfgang became an Alter Bridge fan and came to a show. He invited us to his Van Halen sound check and I got to meet everybody again. Every time I go out to LA, I hang out with Wolfgang. Last time I was there, he called me up and invited me to see Van Halen practice and run through their new album. That was amazing. I got to go to Eddie’s house and studio which is pretty much a little house on his property that they practice in. I got to see all their new music first hand.

Amy: What else are you listening to these days yourself?

Mark: I am into guitar music. I listen to stuff that I am trying to learn. I was just listening to Larry Carlton trying to pick up some ideas. Jazzy stuff, bluesy stuff.

Amy: I guess you won’t answer this question but if you had Battle of the Bands between Creed and Alter Bridge, who would win?

Amy: Are you going to be going back out with Creed this year as well?

Amy: Is there going to ben new music to follow with that?

Mark: Yeah. We hope to get all kinds of new stuff out, we might do some acoustic stuff, some electric stuff, maybe some unreleased video. DVDs maybe.