A Conversation with Stevie Nicks 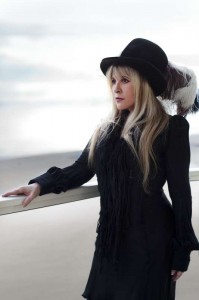 There are not too many musicians that could be said to have defined all music. Stevie Nicks has truly defined women in Rock-N-Roll. She is the gold standard and who all female leads will always be compared to. She was the defining voice behind Fleetwood Mac since the mid 1970s sporting dozens of hits. She has also been able to separate and create a wonderful solo career as well releasing her 7th album, In Your Dreams, in May with great success debuting in the top 10 of the Billboard charts. She is currently on the road to promote her latest record with her solo act and will come through Cincinnati on Saturday night at the PNC Pavilion at Riverbend. It will be a fun night of music showcase with her new sounds and a nostalgic flair.

We caught up with Stevie via email this week to discuss her upcoming tour stop in Cincinnati and her inspirations for the new record and what a typical day looks like for an iconic rock star.

Amy: You recently released your first new album in ten years “In Your Dreams”. What was your biggest inspiration for the album?

Stevie:  I actually didn’t think I’d do another album for many years.  But I went to see the movie “Twilight New Moon” in Melbourne Australia when I was on tour in 2009. I loved it so much that I went back that night to see it again. It inspired me to go back to my room and write an essay based on the love story of Bella and Edward and Beauty and the Beast.  In the next city we were in, Brisbane, there was a piano in the suite. I sat down at the piano on our night off and wrote the song that became Moonlight- A Vampire’s Dream. I turned to my assistant when I was done and said, “I’m ready to make a record”.

Amy: You stated recently that having a boyfriend takes you away from being an artist. Do you get lonely and miss romance?

Stevie: I think balancing a relationship and being an artist is difficult.  Hard to wave goodbye and get in a limo and leave for a year. But it’s not impossible. I’m not a lonely person. I draw, read, paint, write poetry, have great friends and family…and a dog! Sulamith Wulfing, my Chinese Crested Yorkie, is the love of my life!

Amy: Do you have a hard time writing music when you are not in a romantic relationship?

Stevie: I have books of poetry that I’ve written for years and I go through them and see which ones I want to turn into songs. I am also inspired to write based on situations my friends are going through. I also have many, many songs “in the vault’ as they say as well.

Amy: What was your fondest memory from the Rod Stewart tour this year?

Stevie: That we got to sing together onstage. We had a great time.

Amy: Do you keep journals? Have you kept them throughout all your years in music? Would you ever share them with the public in the form of a book or to potentially help people who are struggling with addiction?

Stevie: Yes…I have kept journals for years and I write in them every day.  I’ve been asked to make them available and to do poetry books and an autobiography but I’m not there yet. As for a book to help people who struggle with addiction, I’ve spoken very candidly and extensively in print and on tv on this subject and have been grateful to hear from many people who appreciated my being up front and warning them about certain medications even if a doctor prescribes them such as Klonopin. I lost years of my life when a doctor prescribed them to me as a way to get past a cocaine addiction.

Amy: What is a typical day like for Stevie Nicks?

Stevie: I sleep very late and have many cups of coffee before I even get out of bed.  I try to have a vocal lesson every day.  I go on the power plate.  I write in my journal. I do interviews when I’m promoting a new CD like this one.  I look at the ocean.  Read magazines… and that’s about all I’m prepared to share for now.

Amy: You are an inspiration to almost all relevant musical acts today. Who are your biggest current musical inspirations?

Stevie: I love Katy Perry and Vanessa Carlton who has a wonderful new CD out.  I also like Michelle Branch and Sheryl Crow.  My inspiration? Tom Petty and the Heartbreakers – ever and always.

Amy: You recently performed on the season finale of The Voice. Why was it important for you to support the talent on this show?

Stevie: I watch that show and all the others.  Once I was starting out like them and I like to help people realize their dreams.

Amy: Have you ever been star struck?

Amy: What can fans expect from the show in Cincinnati this weekend?

Stevie: Old songs, new songs, bits and pieces of the new videos for both Secret Love and For What It’s Worth, which is my new single, with Dave Stewart and Mike Campbell. Stories about all the songs, new clothes and 2 hours of fun!