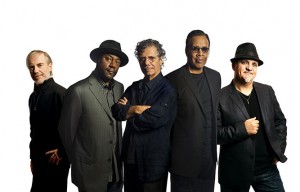 Return to Forever is a New York based jazz fusion band that was formed and made a name for themselves in American culture in the early and mid 1970’s. After a brief return together in the 1980’s, they re-formed in 2008 and have seen wild worldwide success since the comeback. They are in the middle of their second world tour since their return and they released a live album in 2009 to complete the comeback. Over the years, they have done jazz rock better than anybody else and still give a consistent offering with every performance.

Amy previewed their upcoming show with drummer Lenny White. They discussed the issues that come with a return to the public eye and the great collaborations he has been able to have with legends of all genres. Return to Forever will be performing Thursday, August 18th at the PNC Pavilion.

Amy: You guys have been in Return to Forever for many years, but you had a long break and came back together for this new album in the 2008/2009 timeframe and the world tour. How did you guys decide to come back together and decide to embark on this world tour?

Lenny: Well what happened is that you know when we got back together in 2008 people had been asking for it for 25 years and so we felt as though it was time to do that. So we got back together and did a world tour and it was very, very successful. After that, Chick, Stanley, and myself decided to go out as a trio just to play as a different kind of experience and play some different kinds of music. It was a reach again for us to come back out but I think the other ones wanted to do something different and we parted ways from that and put together a new configuration with Frank and Bobby and Jean. It was great. We did a tour of Australia in February and we just finished up the European leg of the tour. We went to Europe then finally Israel and then we got back a couple days ago. We are going to start to do the US on Sunday.

Amy: So you are a little jet-lagged?

Amy: What can we expect from the Cincinnati show?

Lenny: There are fans that have stayed with Return to Forever through the years. They know what we do with our kind of music. This is a little different because of the new configuration. Now there is a violin in the music that gives it a different color. We have actually taken some of the songs that we have done and re-issued them with some different ideas on how we approach them. But you can expect what you would expect from a Return to Forever concert, great playing and having a good time. But we are rocking out.

Amy: You did have many new musicians come into the band over the years. How do you integrate a new person into the band and how do you audition someone to know they are going to be a good fit for the team?

Amy: I listened to the Forever album this week. I think it is obviously wonderful music and great to have in the collection and my favorite song was on both albums was the “Windows” song. I was curious when you guys go into the studio to write or get together to write, is it a process that you do together or is it something that you do individually and come together with ideas?

Lenny: It’s both. “Windows” is a song that Chick wrote a long time ago. He had performed it with a lot of different kind of configurations. It is like a jazz standard. When we re-visited it with Forever, it was our take on it. Stanley and I had not played it that much, of course Chick wrote it, but when he got with Stanley and myself it took on a different feel. But most of that music, the acoustic auditions of those songs; we are not doing with this version of Return to Forever. This is more electric and rocking out. It has changed again the process that happens when I write a song and bring it to the band or Stanley writes a song and brings it to the band. But then there is a different process when we are in the studio together and we start to do something from scratch, it’s a whole different process. So what you have, you have everybody in the band are composers. When we get together, you have this energy that happens and anything can happen. When you write a piece of music and bring it into the band, it is one thing. You might have, as a composer, one viewpoint of how that happens. But because of the different guys, you never know what can happen. It comes from something else. It literally happens every night.

Amy: I find it amazing that you played with some of the best jazz artists in the world. I was curious to see if you could tell me one of your fondest memories of recording Bitches Brew with Miles Davis.

Lenny: That was my very first recording. So for me that will always have a special place. And for it to be a landmark recording like that is very special too. I just remember being with all those guys that are my heroes and I was the youngest of them and for me to fit in was a big issue for me. What happened, I went into the session thinking one thing; thinking I needed to play a certain way instead of acting the way I needed. I started playing on a song and he would say, “That wasn’t what I was feeling,” and he would say it that way. After the session was over, I was kind of down and I was sitting in the corner and Miles came over to me and put his arm around me and said, “What’s wrong?” I said, “I didn’t do what was right.” He said, “No, no, no, don’t worry about it. Come back tomorrow. You did good. It’s not a problem. This is a learning experience for you.” And I learned a lot from that.

Amy: You have worked with Shaka Khan and Miles and Freddy Hubbard. Is there anyone out there that you would like to collaborate with that you haven’t been able to?

Lenny: That has changed over the years. There was a time period that I would have really wanted to really work with Bjork and I still do. Robert Plant, I could see a situation that I would like to get into and make some music with Robert. But I have worked with a lot of folks. Each day brings on something new. So I would wake up tomorrow and want to work with this person or that person.

Amy: Well you have definitely had a big year as you said you have traveled all over the world playing music. What would you say has been your biggest highlight of 2011 so far?