The inaugural Kanrocksas Music Festival took place at Kansas Speedway in Kansas City last weekend with headlining performances by Eminem, MUSE, The Black Keys, Cage the Elephant and many more acts. The festival is being called a mini-Lollapalooza as many of the same bands performed as they made their way to and from Chicago. We caught all the headlining bands with photo coverage and were impressed with the overall festival and organization in its first year. Eminem brought the house down with an epic performance on night one singing classics like Stan with the video playing in the background and newer hits including Airplanes.

Cage the Elephant also had one of my favorite performances that was high energy with lead singer Matt Schultz diving into the crowd singing In One Ear. They have taken the garage band setup to a new level. Their energy and raw talent has made them a summer festival favorite. They have just come off releasing their 2nd nationwide label studio album, Thank You Happy Birthday which features Rock number one hit “Shake Me Down,” and the current single “Around My Head.”

Amy sat down with lead guitarist Lincoln Parish and rhythm guitarist Brad Schultz before they took the stage at the Kansrocksas music festival this past weekend. They discussed the band’s most recent show and performances in Cincinnati as well as dealing with nerves, no matter how big the stage they perform on.

Amy: You had a big day in Cincinnati back in March, you came through and played Bogarts and you sang at Opening Day for the Reds. How was that experience for you?

Brad: Then right before we went on they were like, “The keyboard is definitely going to start.” 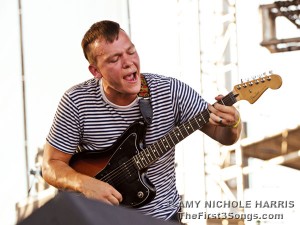 Amy: It was “Take Me Out to the Ballgame” right?

Lincoln: The keyboard starts and goes through once and then there is silence and feedback.

Brad: There is a build-up of “Da-duh-da-duh… RRRRRRRRRRRRR” like a little feedback.

Lincoln: Then Jared starts out (really deep) “Take me out to the ballgame!”

Brad: Then we all staggerdly fell in.

Lincoln: When we came back through the stands afterward and this dude was like, “Keep Practicing!” and a guy behind him said, “It ain’t gotta be perfect!”

Amy: So you had a show at Bogarts that night, did you guys have any fun, memorable experiences that day?

Brad: We have actually played Bogart’s a few times now. We played with Silversun Pickups and played it a few months back. Cincinnati is always a fun city. The crowds always seem like they go for it from the first beat of the song. 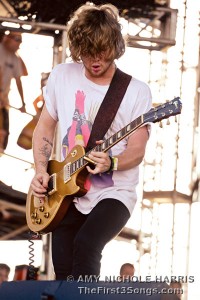 Amy: I’ve shot you guys three or four times this year from a photography standpoint and Matt always does crazy shit, he jumped off the soundboard at Voodoo and he almost took my head off jumping into the crowd at the Beale Street Music Festival. Do you guys ever get worried he is going to hurt himself?

Lincoln: He already has hurt himself.

Brad: The only time I was like “Oh crap!” was at the Vic in Chicago. He climbed probably 15 or 20 feet. His head was at the second balcony and he dove off from there.

Brad: Sometimes we’ll go off stage and we don’t even know he’s even up there jumping off.

Lincoln: Sometimes I don’t even see him, we’ll hear about it afterwards.

Brad: Most of the time you will know. We get off stage. We are all chilling and you hear everybody in the crowd go “AHHHHHHHHH,” you know Matt just jumped.

Amy: He said he hadn’t got hurt recently.

Brad: Yeah. I don’t know, he has something going on with his knee right now. He has like a torn meniscus.

Amy: So you guys have a big weekend. You have this, Kansrocksas, then you have Lolla tomorrow.

Amy: Do you guys ever get nervous in front of these 60-100 thousand person crowds?

Lincoln: The only time I remember that I got really nervous was the first time doing Letterman.

Brad: It feels like you are under a microscope.

Lincoln: There is this big build up then you are just out there playing it, and then it’s done. It’s weird.

Brad: I usually get nervous before every show, but it’s usually a good nervousness.

Brad: Yeah, yeah, yeah. To tell you the truth, some of the smaller shows are more nerve-racking than the big ones. We just recently just played Tidball’s in our hometown… 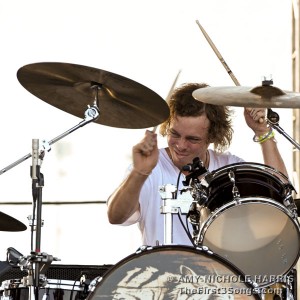 Amy: I saw you guys had Bowling Green recently and you said on your website that you were going to do another one because it sold out so fast.

Brad: We’re going to do another one sometime in the fall and winter.

Amy: You were nervous for that because it was your hometown, people know you there?

Brad: Yeah. Plus, there is a really good music scene in Bowling Green. There is a band called Morning Teleportation, I think they have played Bogarts before. They did the David Letterman Show. They did an album with Isaac Brock of Modest Mouse and there is another band called Sleeper Agent. This week they are iTunes single of the week. They have been getting on the Top 40 countdown on Alt Nation. I think they have a top 40 single. Then there is another band called Schools. All those bands were just mentioned in Rolling Stone too.

Amy: So did you play with any of them when you were there?

Brad: We played with Schools and Sleeper Agent. I don’t know, we just want to help nurture what is going on in Bowling Green right now.

Amy: It’s really close to Nashville but it is a different kind of vibe or feel to the music there.

Brad: I think what kind of makes Bowling Green special is that people don’t feel like they have to live up to a certain scene. There is not like a Indie music scene or a Punk scene or whatever scene. People make music and whatever it is, it is.

Brad: Three of us do me, Lincoln, Tichenor. Matt and Jared still live in Bowling Green.

Amy: When I talked to you last, the album had not come out. We had the single and you were playing a little bit of it. It came out in January. Are you playing it today at the festival or are we going to hear old and new music.

Lincoln: We are actually going to play from our third album only.

Lincoln: No, this is our fifth album. We are going to play the third one.

Amy: I thought you only had two. I thought Thank You Happy Birthday was the second. Did you have an EP earlier?

Lincoln: No, we are just kidding we only have two albums but we should make a prequel album. I don’t think any band has ever done that, have they? Can you make an album of what it would have been before you made the album? Like super dumb it down.

Amy: I have been talking to bands this week, Journey, Night Ranger, bands that are on their 15th album, literally their 15th. So when you are on your 15th, I’ll be old and gray. I’ll be sitting here and you’ll go “We are playing from our third album today. 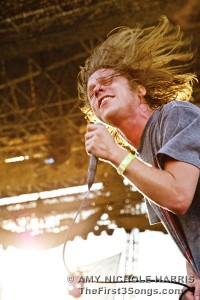 Brad: Not by choice.

Lincoln: Not by choice. It won’t be a shaved look.

Amy: Do you ever get starstruck?

Amy: He was just in Cincinnati Thursday on the last night of his tour.

Brad: He was eating a cheeseburger and Matt decided he was going to go talk to him.

Lincoln: I thought he was a vegan or something.

Amy: I guess not.

Brad: I guess not.

Brad: But it was a burger of some sort. Anyways, Matt said he was going to go talk to him. I’m like, “No, I’m not going to do that.” I don’t know, there have been a few people I have been too nervous to meet.  He is one of them and Iggy Pop was one of them but Matt went over and said hello.