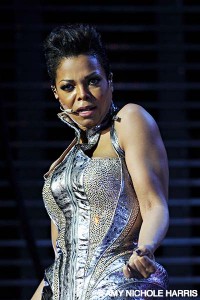 Janet Jackson literally comes from the music royal family. She has extended the legend of the Jackson family positively through her strong powerful voice and a performance that could only be matched by her brother, the King of Pop himself. She has a very successful acting career with several Tyler Perry produced and directed movies, Why Did I Get Married, the sequel Why Did I Get Married, Too, and the 2011 hit For Colored Girls. She recently released her first book True You: A Journey to Finding and Loving Yourself. “The Baby Sister” has broken free of that name by creating a legacy of her own through versatility of music, dance, and performances on the silver screen.

Jackson will be performing at PNC Pavilion at Riverbend on Thursday August 11th  bringing her “Number Ones” tour to town.

Janet is extremely private in her personal life but we were able to catch up with her via email to talk about her book and her upcoming tour performance in Cincinnati.

Amy: What is a normal day for Janet Jackson?

Janet: That depends on what is going on in my life. One thing that is consistent is that I start every day with a prayer to God.

Amy: You have played in Cincinnati before on previous tours.  Any significant memories?

Janet: Yes, if I remember correctly, I was in Cincinnati for the Rhythm Nation, JANET and Velvet Rope tours. The one thing that stands out most for me is how wonderful the people are. I can’t wait to get back and see all my fans there.

Amy: What inspired you to write your book “True You” which came out in February?

Janet: When writing “True You”, it was important to me that people who read it, especially the kids, know that they are perfect just the way they are… no matter what they are going through they are not alone. It has been a long road for me, but I am happy with my life. I wanted to share with people who are struggling with self-esteem issues my journey to finding and loving myself. I’m hopeful that my book helps them love themselves as well.

Amy: How is touring different now than when you were on your first world tour?

Janet: I have always performed in arenas or stadiums. This time, I wanted to perform in beautiful, intimate venues whenever possible. It has been so much fun for me because when I look out into the audience, I can see everyone’s faces. I get so much energy from them.

Amy: In the past you have spoken about your love of acting. Do you have any current projects in the works?

Janet: It has been a lot of fun for me to focus on acting again. Yes, I will be in more movies. I am reviewing a few now. The most important thing for me to consider taking a role is that it needs to move me in some way. I am also excited to partner with Lionsgate to produce a film. I’m reading scripts to see what would be interesting to be involved in from that point of view.

Amy: What is your favorite song to perform live currently? Why?

Janet: I love performing all my songs. This is the first time that I have done a concert where I only sing songs that the fans made number one. It is great to revisit these songs and see the audience reaction.

Amy: What can fans expect from the current tour when it comes to Cincinnati? 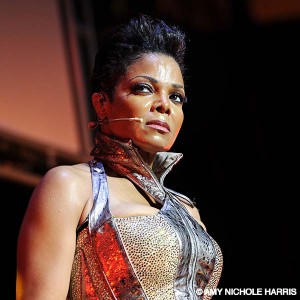 Janet: This tour is a thank you to the fans for supporting me all these years. It will be intimate… There are no special effects. It’s just us… and my dancers… LOL. I can’t give up dancing.

Amy: What inspires you?

Amy: What song do you think personally represents you the most?

Janet: They all represent me. My music is very personal.  I don’t keep a diary. I write about what is going on in my life at the time, so they all say something about my life.

Amy: What music are you currently listening to on your Ipod?

Janet: I have always loved Jazz, Bossa Nova and Samba.

Amy: Do you do anything in the current tour to maintain Michael’s memory while on stage?

Janet: I did a song with Mike, Scream, which I sing in the show. I am enjoying singing it. I hope that the fans like what I have done with it.

Amy: In each city, you are recognizing 20 community leaders who have made an impact on their city. How has this inspired or affected you so far on the tour?

Janet: I have loved meeting these kids. They are extraordinary! They are doing everything from fighting HIV/AIDS to educating their peers. I knew that I would be meeting awesome kids, but I had no idea just how incredible they would be. I wanted them to be recognized and hope that it will inspire others to follow in their footsteps.

Amy: What has been your most significant moment of 2011?

Janet: There are just too many to mention!

Janet: I try to live my life in a way that I have no regrets. Life is too short.