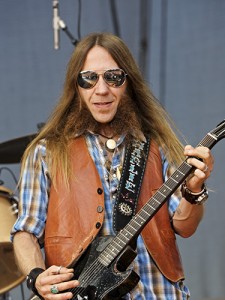 Blackberry Smoke is a classic Southern Rock sound mixed with a little country that gives them mass appeal. They have been growing for the last decade and have now found themselves on tour with fellow outlaw Jamey Johnson. Recently they have signed with Zac Brown’s label Southern Ground and are currently in the studio making a third album. Their second album Little Piece of Dixie, while not gaining great critical or public acclaim did very well in underground music circles.

Amy spoke with lead singer Charlie Starr in preparation for the band’s show in Cincinnati with Johnson. The two discussed the great acts the band has had the opportunity to perform with and their cinematic choices on the road. They will be playing at Riverbend Music Center on Sunday night.

Amy: You guys are signed to Zac Brown’s record label right now. How did you hook up with Zac Brown initially?

Charlie: Well, we actually knew pretty much everybody in his band over the years because we are all from the Atlanta area. I actually didn’t meet Zac until the very first Skynyrd cruise that we went on, the Simple Man Cruise, and that was back in either ’05 or ’06. We all just hit it off. Fast forward a couple years and we watched him have so much success. All of the musicians from Georgia are so proud of him watching him skyrocket and win Grammys and what not. We always kept in touch and we actually did a couple of shows over the years, not many. Then we found ourselves at one point a year or so ago with a label that we were signed with was going out of business. Times were tough and they were not having a good go of it so we found ourselves without a home. Zac contacted us and through the rumor mill the way that it is, he contacted us and said “If you guys need a home, you got one.” And we said, “Thank you very much.”

Amy: I saw you guys for the first time live at Voodoo Festival last year in New Orleans. I was looking through the photos today and re-living that experience. You guys are pretty fantastic live so we are looking forward to having you here with Jamey on Sunday.

Charlie: Thank you very much.

Amy: When you are out on the road, you play a lot of shows in support of Jamey Johnson and Randy Houser and many artists. Do you ever get a chance to sit down and write with Jamey or other artists when you are out?

Charlie: I haven’t written with Jamey but I have with Randy. We wrote a song called “Up In Smoke” that is on our album Little Piece of Dixie. That was a good long time ago. I think that was back in ’08. 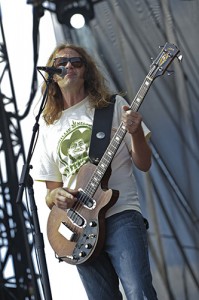 Amy: I was looking at your tour schedule online, you guys seem pretty packed and it looks like you are in the studio along the way. What do you guys do out on the road for fun?

Charlie: We watch plenty of movies, that’s for sure. We go bowling from time to time. We go to bars if we have a night off. If we have a show day there is never really time to do anything. There is all that work that is geared up toward the 90 minutes of music that we are going to go play. The show dates are pretty focused really.

Amy: What is the most recent movie you watched?

Charlie: I guess we saw The Expendables. We don’t always go, whenever I say movies, it’s always DVDs. When we watch it, it’s usually DVDs that we buy at a truck stop. Tombstone is, there are two or three movies that have been in our rotation for years, Tombstone is one, Sling Blade is one, Three Amigos is one.

Amy: That’s always fun, to re-live the old ones.

Charlie: And we’ll just systematically put one of those in and quote it right along with the dialogue.

Amy: You opened for Kid Rock for a couple shows last year. One in particular was a “Salute the Troops” type show. Why is it important for you guys to support the troops?

Charlie: I think everyone in our band, all of our fathers were military. I know mine was and Brit and Richard’s dad was a retired Air Force colonel. We know what that is about and know many people with relatives now that are active. We are also just patriotic. We are believers in the cause and the fight. We don’t care what people’s politics are. We just have to support the men and women who are over there giving up, making the ultimate sacrifice.

Amy: What’s your craziest Kid Rock story or story on the road?

Charlie: You can’t print it. He wouldn’t want me to tell you.

Amy: You said you were in the studio today, are you guys working on new music right now? 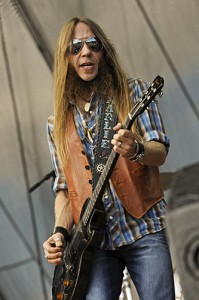 Charlie: Yes. We are recording our new album as we speak.

Amy: Do you do it on the road or are you guys off the road this week?

Charlie: We are on the road. We are in Asheville, North Carolina. We leave here Friday and do a show in Athens and then go do the two shows up in Ohio. We had a four day break from the road and we have to make an album in four days.

Amy: Is it true that Chris Robinson from the Black Crowes gave you guys your name or is in some way associated with your name?

Charlie: That is true. We couldn’t come up with a name and he christened us Blackberry Smoke.

Amy: Someone recently told me that you guys have little jokes and quotations at the bottom of your set list every night. What is the story behind that?

Amy: Are they just little inside jokes or do you just do little movie quotes?

Charlie: Some of them are. It is whatever mood strikes us and there is the mysterious dude Gene that is behind some of them.

Charlie: I am listening to a couple things. There is an album by Rye Cooder called Boomer’s Story and then there is the Black Keys Brothers album. 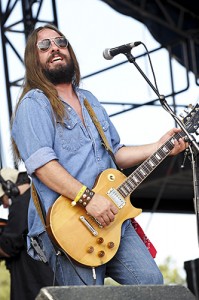 Amy: You’ll be in Cincinnati on Sunday. Do you have any fond memories of Cincinnati or favorite things to do when you are here?

Charlie: Yeah, we had some wild times at Annie’s years ago playing with our buddies Jackyl.

Amy: I know your first album you worked with Jesse to produce it.

Charlie: We did a really wild show there years ago with Nashville Pussy and Jackyl.

Amy: You guys have been together a decade now as a band. Where do you see yourself in ten more years?

Charlie: Just making music. As long as we are making music, I’m happy. The fact that we get to make music for a living is a blessing definitely not a burden.