The Decemberists Interview with Nate Query 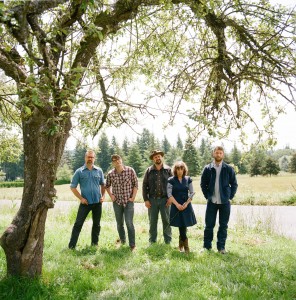 The Decemberists are a very popular folk rock group with an easy sound that appeals to the mass audience while keeping their Indie edge. They believe that life as a musician means continual evolution and that over the course of a career, any band worth paying attention to will pursue a sound, a direction of great adventure. The Oregon based group has spread from the West Coast bars to filling venues throughout the country. They are currently touring behind their new album The King is Dead which debuted at #1 on the Billboard Top 200 album chart. They have collaborated with members from My Morning Jacket, R.E.M., and even the Los Angeles Philharmonic.

Amy spoke with bassist Nate Query. The two discussed the new album and tour. They also spoke about the upcoming break the band will be taking and where the band is headed. The Decemberists will be performing Thursday night at Riverbend. It would be smart to catch this widely popular act it will be the last time they play Cincinnati before their scheduled hiatus.

Amy: I’ve been listening to the new album The King is Dead this week and I wanted to start with some questions about the album and how you put it together. My favorite song was the “January Hymn” song, and I was just curious about the story behind that song.

Nate: Well, I’m a bass player not the songwriter so I won’t read too much into it. That song and “June Hymn” is Colin kind of doing an ode to the seasons in Portland, especially in the part of Portland that he lives which is near a big park with a forest. A lot of the imagery is about painting a vivid picture of January in Oregon.

Amy: Most of your songs are very vivid storytelling. Do you write as a band or does one person take the lead?

Amy: What was your best story or your funnest story while working with Peter Buck from R.E.M. on the album?

Nate: He is really fun to work with. We had done some shows with him and met him a few times. He is one of those guys who obviously has been around and is an insanely successful musician. He is always game to jump on somebody’s record and play. He comes in and just plays through the song a couple times. He doesn’t even want us to tell him what the chords are or anything. He just sort of starts playing along and by like the third time he says, “Let’s do it,” and flies through it. It’s pretty amazing. He is an easy-going and fun guy to work with but also such an amazing musician, so fast at just getting his signature sound and playing the song perfectly right away. It’s pretty cool.

Amy: You guys took quite a bit of time to put this record together and put it out. How do you as a band not get caught up in the record industry pressure to put out a new album every year and tour constantly?

Nate: Well, we haven’t really felt that much pressure to put albums out more often. I think from the beginning, we have done things our way. When we signed with a major label, we sort of made it clear that we are not going to change. We are not doing this to become a different band. We are going to keep being the same kind of band. We tour pretty reasonably and make records every couple years. I don’t know how many people put out records every year anymore. It seems like most bands it takes a couple years. When you are touring on your record for your record for a year or more, then you make your record, then it takes six months to come out. I feel like we have been working pretty steady. We don’t get a lot of pressure from the business people so much. It is usually up to us how we structure our schedule.

Nate: It’s funny because in some ways it’s still all the same. We still make records and we still make music, and we still play in small places at home with other bands. But then, the most obvious change is that it is easier. It is more comfortable. It is easier. We have nicer instruments.

Nate: And a bus. But it is a lot more complicated because it is this big behemoth with so much momentum. Whereas, back then it was so spontaneous. We would jump in a van with no crew or anybody and just go and sometimes sleep on the floor. We have been on this tour with a couple friends from Portland bands who have been opening for us. It is kind of fun to see how much fun they are having being spontaneous and doing that type of touring. But they are also a lot younger than we are. I am definitely too old for that. I did a tour like that with my side project last year. I was definitely like, “Yeah, I can’t do this anymore.” It’s too exhausting. The biggest change is that if you get a little more established and successful, you are able to focus on the music making part of your career in a more specific, more intense kind of way like that is your job and that is what you are doing. You still have to pay attention to the business stuff and the other stuff, but you don’t waste as much energy dealing with details.

Amy: You mentioned your side project. I know you have your bluegrass band, The Black Prairies with some other bandmates. Will you be working on that in the fall when the summer tour is over?

Nate: Yeah. We have a lot of work to do with that. We are trying to write a new record and we are touring and a play, a stage production of this graphic novel. Chris and I have been working on it a little bit on the road but as soon as we get off the road we are going to kick butt into high gear. We have a lot of work to do. We agreed to do all this stuff and now we better get to work. It will be nice to have time that our other projects can sort of rise.

Amy: There have been other mixed reports that I have been reading that you guys may be taking a very long break. Is there any truth to that?

Nate: We are going to be taking a long break. We don’t have an end completely settled but we were talking like three years or something like that which is a pretty long time. Many bands take that long to put a record out, but we are making it kind of a break where we are not planning on doing shows together or anything. We are letting everybody focus on other stuff. We usually take  a break in between records but a lot of times we end up doing a few shows here or there in the summer. We are trying to make it more of a real hiatus and let everybody go to their own little corner and do their own stuff for a little bit.

Amy: I know a few months ago Jenny was diagnosed with breast cancer. How is she doing and how are you guys dealing with that as a band?

Nate: She is doing okay. She is going through chemo right now. Anybody that has gone through chemo knows it really sucks. She has a really good attitude and is being really strong. She is on a schedule where she feels terrible for a couple weeks then has a week where she feels pretty good and can be active. She is coming to Austin next week for a couple shows. She is also planning on doing the Portland shows at the end of the month. She tries to schedule her good weeks with lots of fun stuff. We have been kind of soldiering on without her. It’s a bummer. We miss her every day for sure.

Amy: I assume that has been hard for you guys as well.

Nate: It seems like it made more sense for us to power through and do these shows and have Jenny stay at home and get better then take our break in the fall as planned. But it is pretty brutal.

Amy: What can we expect here on Thursday night when you guys get here?

Nate: We are going to play a lot of our new record because that’s what we do. We have Sarah Watkins with us singing and playing fiddle. She is playing a lot of the new record and some of Jenny’s keyboard parts too but she is not a keyboard player. We have a really great band called The Head and The Heart opening up this trip. It should be a good one.

Amy: I look forward to seeing it. I have been following you for several years and have always wondered where the name came from?

Nate: Originally, and this actually pre-dates anybody except for Colin, but when Colin first started the band they called themselves the December Brides, and before the first show, which once you do a show you are stuck with the name. He was hanging with the band and some friends and everybody kind of agreed that it was a dumb name. So they were kind of brainstorming and somebody was like, “How about the Decemberists? And it stuck.

Amy: How do you define success?

Nate: I think it is being proud of what you are doing and having people you want to think so think so. We are proud of what we are doing and we have the people that have been listening to us for a long time still coming and new people are coming as well. So we think we are successful on those terms. Way beyond what we imagined ten years ago.