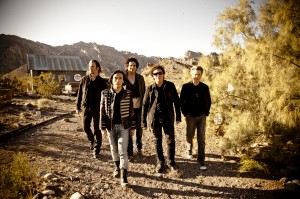 Journey can only be described as 70’s and 80’s Rock legends and they are still going strong. “Don’t Stop Believin” is the number one ITunes download of all time and they have created some of the most well-known songs in modern music. Their summer tour schedule includes stops all across America and they are back with their 15th album, Eclipse, released earlier this year. Their current tour supports the new album with other arena rock legends Night Ranger and Foreigner.

Amy had a chance to speak with the band’s drummer, Deen Castronovo. The two spoke about touring, the new album, his love of KISS and some fond Coney Island experiences in Cincinnati. The Eclipse tour will be arriving in Cincinnati on August 3rd at the Riverbend Music Center.

Amy: First of all, I’d like you to talk about the new album Eclipse, which is the band’s 15th album. Tell us a little bit about the album and what your favorite track is to play live.

Deen: The new album, we love, we’re very proud of. It’s definitely more guitar-driven than a lot of the Journey records we have had in the past. Actually, Arnel got to do a little writing on the record which is great that we have added him to the mix with writing. My favorite song I have to say is a song called “Someone.” It’s classic Journey. When I hear this song, I get chills and I want to drive really fast in my car. I love the song. It’s a great song.

Arnel Pineda is the current lead singer of the band with uncanny vocal resemblance to Steve Perry. Pineda was discovered by the band on Youtube performing Journey songs. It is a true Cinderella story where Arnel was flown halfway around the world from the Philippines to audition with the band for two days before landing the gig of a lifetime.

Amy: I read that some of your earlier influences were Rush’s Neil Peart and from KISS Peter Criss. I actually had an interview last year with Eric Singer. One of the questions I had was if you had played with any of these guys before and is there someone you’d really love to play with that you haven’t had a chance to yet?

Amy: Is it true that you are still really good friends with Steve Smith?

Deen: Oh yeah. Smitty is not only one of my biggest influences but he lives about 200 miles from me in Ashland, Oregon.  I live in Salem. When I joined the band, I sat down with him and made sure that I had all the drum parts correct and that I would do the songs justice. He is a wonderful human being and, to me, one of the greatest drummers of our time. He is just amazing. So yeah, we’re very good friends. We still keep in contact.

Amy: I have spoken to a lot of drummers over the last year. It seems really hard on your body, just brutally beating the crap out of your body every night. How do you condition for it or stay in shape doing it?

Deen: For me, it’s a lot of protein. No alcohol, no drugs, obviously. Lots of water and I have the energy of the Energizer Bunny. I am just psychotic. The guys in the band actually have to feed me candy and cake to calm me down after shows at night. I just go out and keep myself healthy and play like it’s the last show I’ll ever play. You have to keep yourself in shape. The partying and staying up all night long, I’m 46, I can’t do that anymore. I just cannot do it. It’s a lot about what you eat and how you take care of yourself. There’s a good, strong regiment that everybody in the band follows to make sure that we’re in top form and bring our A game every night.

Deen: The buses are nicer, that is always good. Obviously, when you are younger, you get to have a little bit more fun if you know what I am saying, the partying stages. But we’re all an age and we all have families, that is not an issue anymore. You really have to pay attention to your health and that’s a huge part of it. As you get older, obviously things start to break down. My eyesight is not the greatest anymore and that’s a bummer. Other than that, we know that it is a lot of fun and we are blessed to do what we do but it is a business and we have to conduct ourselves as such.

Amy: What is your greatest rock n roll moment ever?

Deen: As a player or as a fan?

Deen: As a player, I would say joining Journey honestly was the biggest thing ever for me. Bad English was my first big band and I will never forget that. But getting asked to play in this band is an honor and a privilege. I’m very humbled to do it. As a fan, you’re gonna love this, seeing KISS for the first time when I was 11 years old. It was the coolest thing ever. Like I said, they were my Beatles. They were the reason I became a drummer. To see them and now being friends with Paul Stanley, and Eric, and Tommy Thayer. I grew up with Tommy as well. I went and actually saw them in Oshkosh. The band flew out to Omaha and I stayed in Oshkosh just to see KISS, me and my drum tech. So I’m a huge fan. Those would have to be my greatest times.

Amy: I actually photographed them and saw them for the first time last summer. It kind of took my breath away almost. It was probably one of the best shows I have ever shot.

Deen: They’re incredible. I agree with you. They are incredible. The music, to me, is the soundtrack to my childhood. But to watch them play, they never missed a beat, and they always bring their A game as well. They make sure the fans get their money’s worth and that’s what is so amazing to me. They are in their late 50s and early 60s and they still kill every night. It is so incredible.

Amy: You have played in a lot of bands over the years and you played with Ozzy Osbourne for a while. What’s the biggest difference in playing with Ozzy and playing with Journey?

Deen: Ozzy was, obviously it’s a metal band, and you have to go out there and just kill it. I loved working with Ozzy, he’s the godfather of Metal in my opinion. But Journey is more of a musical thing for me and I think more for the vocalist, not just bashing. It’s much more challenging as a player. Steve Smith and Dunbar killed it every night and it was very technical. Even though it was very simple as a player, there were certain grooves and certain feels that those gentlemen have that I have to copy and emulate and make it the best that it can be because those guys were drumming giants. For me it is definitely much more, you have to think in colors when you play that stuff. Instead of going out there and smashing it, there is a lot more feel. For example, Steve Smith, when he played you could feel the swing as he is playing. For Ozzy, you just go out there and you kill. It’s a Metal band and you have to be a Metal drummer. For me, it’s a little more challenging for me to play this kind of stuff now because it is more musical, the drumming is more musical.

Deen: All the cities tend to run together. It’s Riverbend where we’re playing, is that correct?

Deen: All I remember about that place is that it is really muggy and the crowds are awesome, and that is no joke, the crowds are awesome. There is a river right there behind the place and you could see all the boats gathering around right before show time to listen to the music. That was cool. I thought that was really cool.

Amy: Yeah, the boats definitely do always gather around and sometimes it floods even at the venue.

Deen: It floods as well. I think one of the years we went, it had been flooding for a while and there was a lot of water around the grounds where we were playing and I know they have that really bitchin’ water slide when you drive in. I remember that too.

Deen: Excellent. I am a roller coaster freak and a water slide freak. I love that kind of stuff.

Amy: You could probably freak a couple guests out if you just went over and played on the slide with them before the show.

Deen: You know I’m gonna. I did a couple times last time when the band was just coming back and stuff. I remember on the Def Leppard tour, we came out there and I was definitely doing some sliding. It was awesome, me and my drum tech were tearing it up.

Amy: Well I’ll tell everybody to be on the lookout the day of the show.

Deen: Tell everybody to look for the guy with the purple hair.