Ted Nugent is Coming to Columbus

Ted Nugent has been putting audiences in a “Stranglehold” since he started touring nationally in 1967 with his crazy American Rock. He is probably best known musically for giving us unbelievable, unstoppable guitar riffs featured in his smash hit “Cat Scratch Fever”. But he is probably more recently known for his crazy off the stage antics. He is a crazy free-spirit who prefers hunting wild game with big guns and lobbying for patriotism and his 2nd amendment rights than blending into society’s status quo. He will never back down from what he believes in and is not afraid to be the loudest voice in the room.

Most recently Uncle Ted has taken heat for a recent episode of Piers Morgan on CNN with an interview on gun control where he attacks President Obama. “Anybody that wants to disarm me can drop dead,” Ted Nugent tells CNN’s Piers Morgan. “Anybody that wants to make me unarmed and helpless, people that want to literally create the proven places where more innocents are killed called gun-free zones; we’re going to beat you. We’re going to vote you out of office or suck on my machine gun.”

Amy caught up with Ted to discuss his early roots in rock-n-roll music and the current tour. Ted Nugent will be playing at Lifestyles Community Pavilion in Columbus on Friday July 22, 2011.

Amy: What has been your greatest rock-n-roll moment?

Ted: Oh Lord, there has been a lifetime of nonstop spirit stimulating thrilling tsunamis of excitement and fun. Surely this tour is the most ferocious, high energy fun rock out of my life. My band is the best on earth.

Amy: You often speak about your concern for drug abuse in the country. Are you involved with any programs or charities to help people with substance abuse problems?

Ted: I have been a DARE officer since the programs conception in 1982, and have traveled the country over speaking to schools and youth groups about the insane evil suicide of substance abuse. My own Ted Nugent Kamp for Kids has powerfully impacted thousands of young Americans in a positive and forceful way. I do all I can.

Amy: How do you feel about Hollywood sensationalizing drug use and teen pregnancy with shows like “Teen Mom” and “Celebrity Rehab?” 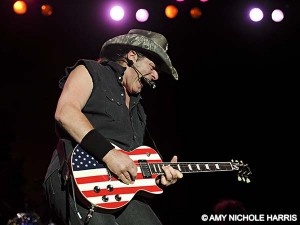 Ted: I think if parents did their job, those types of programs would be inconsequential. Tragically, there is an epidemic of parental disconnect across America that is a curse with long term ill effects. I think the shows are lame and soulless.

Amy: How do you plan to participate in the next election?

Ted: I participate in my “We the people” duties every damn day of my life by writing, communicating and sharing the historical evidence that what the US Government is doing right now has always ended tragically and we damn well better wake the hell up and get back to the US Constitution, Bill of Rights, Ten Commandments and Golden Rule ASAP!

Amy: You started playing guitar at the young age of 6 or 7. Did your parents always support your choice to be a musician?

Ted: Not necessarily. That new brazen, uppity rock–n-roll scared the hell out of pretty much all adults, but with genuine discipline they guided me to be the best that I could be by demanding I practice with all my heart and soul. That always pays off.

Ted: With my hyper fertile imagination, I wish I would have thrown out the substance abusing musicians quicker to get rid of the stinky dead weight, but my animal persistence overcame anyway.

Amy: Any advice on how to keep your family relationships strong while touring?

Ted: I communicate constantly with all my kids, wife, brothers, sisters, grandkids, everyone. But most importantly, when I first became a dad, I made sure I was home for most or all of the school year to be there during those dynamic formative years. You meet my kids and you will see how brilliantly that worked.

Amy: Do you ever worry for your safety?

Ted: Nope, I aspire to my highest level of awareness at all times, operating my chainsaws, machine guns or dangerous hollow body guitars.

Amy: Any animals that you feel like people should not hunt and kill?

Ted: Certainly any endangered species, but all meat is good. 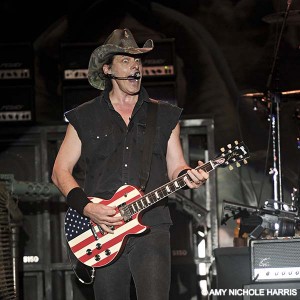 Amy:  What are your thoughts on the recent Arnold Schwarzenegger scandal?

Ted: Man’s history of tested discipline is legendary and always a challenge. We must meet that challenge so as to stop causing such undue, harmful pain and suffering for our loved ones.

Amy: When I searched Google for research on you and recent articles the key words that were repeated over and over were (Conservatives, Detroit, guns, NRA, hippies and Ted Nugent). Do you think these should be the words that represent you? If not what should they be?

Ted: Google sucks. My incredibly positive, gratifying life is about millions and millions of better words that just those. Only a fool would accept a limited dead end.

Amy: Have you ever asked a politician or President to help support Detroit and re-juvenating the city?

Ted: No. Only people can help themselves. It is the soulless concept of seeking outside help that destroyed that once incredible city on the river. The government ruins everything it touches. 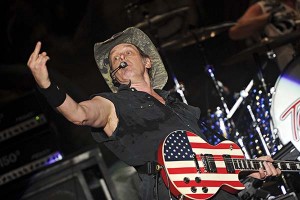