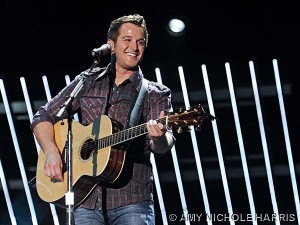 Easton Corbin is one of the hottest new acts in all of country music. Since debuting in 2009 with his self-titled album, which reached as high as number four on the country album charts, he has been gaining great recognition. His first two singles, “A Little More Country Than That” and “Roll With It” skyrocketed to number one in country music. He has been nominated for 11 awards in his short career, taking home three of them, all at the 2010 Academy of Country Music Awards.

Amy spoke with Easton about the new success. They discussed the new tour life and how he is affected by being up on stage in front of thousands of fans. Easton Corbin is on tour with Rascal Flatts and will be coming to Cincinnati for a show at Riverbend Music Center on Friday, July 22nd.

Amy: You’ve had kind of a big year this year. How has your life changed in the last 12 months?

Easton: You know, for me, I travel a lot more. I’m not home a lot. And, of course, a lot more people recognize me. Those are probably the biggest changes you know. Once you’re big, there’s a lot of stuff going on with the schedule. It’s good and it’s a blessing. It’s always better to be busy than not.

Amy: I agree. I have actually seen you perform a couple times this year. I shot the CMA Festival in Nashville and the ACM Awards when you performed out in Vegas. Do you ever get stage fright in front of the large audiences?

Easton: You know, you always get nervous on stage because when you get up there, you want to do great. The crowd has you pumped up so there are always a little bit of butterflies. That’s all part of it. But as far as getting stage fright, clamming up there, not generally, I just enjoy it on stage and have a great time.

Amy: What was the highlight of your CMA Festival?

Easton: The whole thing. This was the first time that I have really been a part of it, where I have been nominated and things like that. So that was really special. The whole thing was an experience, a great experience. 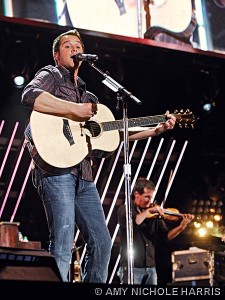 Amy: You’ve been on the road a lot. What do you do in your down time on the road?

Easton: I love to go work out if I can. We don’t get a lot of chances to get out and stretch our legs. So I like to get out and work out when I can. Sometimes I ride my bike around. That’s really cool. I love to do that. They keep me pretty busy out on the road so any chance you get to do that is a nice little change.

Amy: You’ve had back to back really big hits and more coming. How do you know you have a great country song on your hands?

Easton: A great song for me is when I hear it and it’s contagious. The lyrics and the melody, if grows on you once and you want to hear it over and over again. That’s always a good sign for me anyway.

Amy: What are you listening to right now on your iPod?

Amy: Have you ever been star struck?

Easton: Yeah, I was around George Strait once. That was a big moment, absolutely.

Amy: You kind of remind me of him.

Amy: I know you’re from Florida and a fan of the University of Florida. Do you ever take any heat being in Nashville with University of Tennessee fans?

Easton: Oh man, every once in a while especially with the Tennessee fans around here. Not so much the Vandy guys but more the Volunteers.

Amy: Exactly. I’m from Tennessee so I had to put that out there.

Easton: I have to represent. See now you’re giving me a hard time.

Amy: I know you are married and are on the road all the time. I just wanted to know the secret to maintaining the relationship when you are on the road?

Easton: I don’t know. It’s just one of those things you have to maintain when you are out there. You just have to do what you can. It’s about maintaining it and pacing yourself.

Amy: What does your belt buckle say today?

Amy: What can the fans expect for the show in Cincinnati?

Easton: For me, I do country music, traditional style country music. We just get up there and do the songs off the record and have a great time. That’s what it is for me.