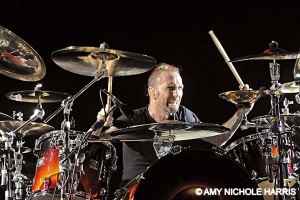 Godsmack is in your face, kick you in the ass heavy metal. Not only do they not apologize for this, but they embrace it. They are touring and promoting their fifth studio release, the 2010 album, The Oracle.

As part of our 2011 Mayhem Festival coverage Amy spoke with Godsmack drummer, Shannon Larkin to promote the upcoming tour stop with the Mayhem Festival  in Cincinnati at Riverbend Music Center on July 20th. In the interview Shannon discusses the band’s writing process and is happy to set the record straight about crazy rumors with a famous rock star groupie.

Amy: I wanted to start with the important questions, I know you love football. What do you think is going to happen with the lockout?

Shannon: I can just hope they will play. What do I think will happen? I think they’ll work it out. There’s millions of dollars being lost with all this bullshit. I’m sure they’ll work it out. If not, there will be no pre-season and then the teams will look sloppy as hell. But we will still enjoy football.

Amy: I hope so. They need to practice. At least the Bengals do.

Amy: You guys have been playing on the Oracle tour for over a year now with the new album that came out. What’s been the highlight of the tour for you guys?

Shannon: The highlight of the tour?

Shannon: Well it’s probably this next leg. This is the biggest tour for The Oracle with this Mayhem Festival thing. This is going to probably be the highlight of it being able to grace the stage with bands like Megadeth, legendary, and Disturbed who are carrying the torch. Machine Head, Trivium, and In Flames have fans that are just killer. This will definitely be the highlight for us in this whole Mayhem tour. And we’re very excited after this, we’re going to go up to Canada where we haven’t toured in like five or six years. We are going to tour Canada for a couple weeks hitting every nook and cranny of Canada and end the thing in Alaska which is always fun, trippy, weird and cool. It’s a very exciting time for us. After that, we’ll take a break over the holidays and get together next year and decide when to go and write the new one. In the meantime, let me just mention that Sully has put a solo record Avalon and I think he is going to try to tour the west on that in November and my side project Another Animal with Tony and Robbie is going to make a new record also and that is probably what is going to happen after Godsmack’s wheels slow down and stop blowing with Oracle. And then we’ll kick ya’lls ass next year.

Amy: I just actually photographed Sully’s solo tour, it just came to Columbus a couple weeks ago. It was really cool, interesting. It is a very different vibe than Godsmack. It wasn’t at all what I was expecting. It was an amazing show.

Shannon: Oh cool. Watch out for Another Animal baby. We’re coming. Our claws are back out.

Shannon: Yeah. Funk is basically the coolest music for a musician to jam with his friends. If you get in a room, like Tony, Robbie, and myself or Tony and Chris, Chris is a bass player and Tony’s best friend, and they have been jamming together for over 20 years. They know each other musician-wise like the back of each other’s hand. As a drummer, to play with these two guys is just the sickest thing as a musician. If we can hit one funk rift, we can jam it for like an hour with smiles on our face and tequila in our bellies. It’s the funnest thing ever. I love Funk.

Amy: George Clinton just made me smile in general. He cut off all his hair. I didn’t even recognize that it was him at first. It was just an amazing thing to be there, to be a part of. I became a fan instantly, seeing it live.

Amy: It is fun. That is the word to describe it. It was just fun to be there, fun to be taking pictures, fun to just be in the room.

Amy: Exactly. Every time I watch heavy metal drumming, I am always in awe anyway. It has to be the best workout you can possibly get. How do you stay in shape because it seems like it is really hard on your body?

Shannon: My thing is just trying to keep the weight on. I sweat so much with that workout and it’s so hot on stage. Usually if it’s not a thousand lights, then it’s a hundred degrees out. So my biggest problem is that it doesn’t really beat my body up. I just lose weight every night. I eat, believe it or not, I’m a 120 pounds soaking wet and I eat like a horse but the way I play it just burns the calories. My biggest problem is trying to keep the weight on.

Shannon: I know, I know. It’s crazy. I used to do all these elaborate stretches and all this crap. Now as I get older, I just do a 12 ounce curl, pick up the sticks and walk on stage. It’s getting easier if anything rather than harder for me. I don’t know why.

Amy: After I met you last year, I heard your name mentioned on a VH1 special on famous rock star groupies with Pamela Des Barres based on her book Let’s Spend the Night Together. I don’t know if you saw it. It aired about six months ago. They were talking about you being in Arkansas with “Sweet” Connie. I said if I talk to Shannon again, I may ask him about how that came about.

Shannon: You may have to excuse the crudeness here but all I can say about that is, she sucked somebody’s dick that day but it wasn’t mine.

Amy: I’m glad you could set it straight.

Shannon: That was shocking even to me and I’ve had a lot of shit said about me over the years but I figured if I cheat on my wife it’s not going to be with a 60 year old. Evidentially, she is really into drummers. I didn’t see it honestly, but my friends, believe me, all my friends told me “Oh my God, you and Keith Moon and John Bonham.” I don’t even know if she blew those guys, but she definitely didn’t blow me.

Amy: That’s good to get it straight from you. I was shocked when I saw it. My initial reaction is that there is no way. I know things get crazy on the road, and I’m sure there are many stories through the years but that one did not seem right.

Shannon: Yeah, I know. Another thing someone told me was she holds up a pair of drumsticks and says they were mine. They were red-tipped drumsticks which I have never played in my life or career. So she, I don’t know, I think she’s just one of those groupies looking for attention and, unfortunately, I was the guy she picked to say that she blew. But not true.

Amy: Well alright, I’m glad we could get the straight story. Have you guys started working on new music on the road at all?

Shannon: Yeah. Well we all have our own handheld recorders and we all are always writing rifts constantly. Tony will play guitar all day long if he’s at home or on tour, he has a guitar in his hand all day. He just plays and plays and plays and rifts come out of him like a machine. He is a machine. So he has a 100 rifts right now ready to go. I do the same thing. Everybody is constantly writing and every Godsmack song starts with a rift. It’s like the soul of the song is the guitar rift. So are we writing, yes. We’re all engaged in it. When we finished recording the Oracle, the very next day we were writing for the next one. It’s just a constant, ongoing thing.

Shannon: You can expect hard rock, blue collar, kick ass set of heavy ass metal, and a big ass drum solo with me and Sully going head to head. You can expect “Forever Shamed,” which is my song of the Oracle record and that’s it. There are no bells and whistles on this one. We’re going out there in jeans and t-shirts. We don’t have pyro. We don’t have video. We have amplifiers, guitars, microphones, and drums on the stage and the four of us are going to do our damndest to kick everybody in the face.

Amy: Did you guys have any good moments in Cincinnati from the last tour?