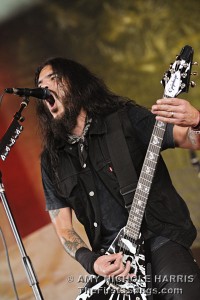 Machine Head has given us six studio albums with the seventh upcoming in September called Unto the Locusts.  The first single “Locusts” the song for which the album is named has been released.  They have headlined every Metal festival across the country and have inspired up and coming metal bands for years.

Amy caught up with lead singer Robb Flynn to preview this week’s Mayhem Festival. The two discussed the road that has gotten Machine Head to the point they are today, their craziest fans and the new album. They will be playing at Mayhem Fest in Cincinnati at Riverbend Music Center on July 20th.

Amy: How was the show last night in Salt Lake City?

Robb: It was really good.

Amy: It was the first show in awhile right?

Robb: Yeah. It was the first show in 15 months. It was a lot of shaking off of the rust, but it was rocking. Very up for it crowd.

Amy: First, I wanted talk to you about the upcoming new album, Unto the Locusts. I actually listened to part of it. The first song was “Locusts” that you guys put out. I was curious about the story behind it and just tell us a little bit about the new album.

Robb: The single came out and it was an advance mix part of a Mayhem/iTunes Sampler. The song is about Locusts. Locusts are a metaphor. The story of locusts when they fly in swarms. They can fly but they can’t control the direction they fly in. They kind of float in the wind and then they land and cause all this havoc and destruction. They fly away and leave you in the aftermath. The song is a metaphor for a type of person who sometimes comes into your life and has a similar effect. 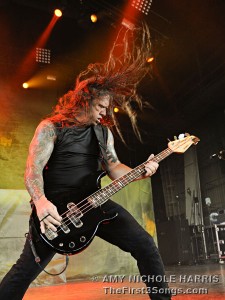 Amy: The song is pretty long, but it’s definitely not the longest song you guys have ever had. You guys are kind of known for that. With over nine or ten minute songs on the last album as well.  Your fans embrace that. Is there a reason that you keep the songs longer?

Robb: When we’re writing , we’re not timing how long the song is. We’re just going with the vibe of it and going with what it feels like it needs. I think the beauty of music is that it can take you on a journey.  I think that there is a theory in the music industry that three or four minute songs are the only things that are going to connect with people, but that sells people short. I think people’s minds can take them on a journey. I like all the ups and downs of the longer songs. Our masters are Metallica “Master of Puppets” era and the Zeppelins and the Sabbaths, the seven minute songs and that kind of vibe. That’s what we grew up on and that’s what we like. “Victims of Changes” by Judas Priest is eight minutes long and totally awesome.

Amy: You’ve spoken before, you guys are from the Bay Area in California, about how thrash Metal shows were violent when you grew up going to clubs and being crazy with the shows. Do you think this is still the case or do you think fans have mellowed out over the years that you have toured?

Robb: Have I seen the fans mellow out?

Amy: Yeah. I shoot a lot of Metal shows. I think there are still a lot of mosh pit elements of it but I don’t see the fans being violent or super crazy anymore.

Amy: What’s the craziest fan story you have? 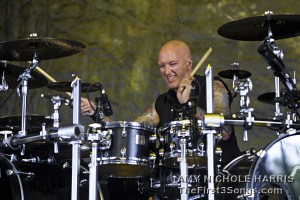 Robb:  People do some crazy shit. They carve our names into them. People jump out of balconies. Shit like that is fucking scary. Kind of scary to watch at times. We’re like, “Fuck dude, be careful.” When we were playing the Wacken Festival, we headlined it, it was our first time headlining it. There was a point when I was looking out into the audience and there was a circle pit that was probably about a quarter mile wide. It was jaw-dropping to watch. The next day we were playing Sonisphere Festival, and Metallica’s light guy, who is a friend of ours who used to be our light guy, counted 22 circle pits. It is amazing to watch that.

Amy: You guys are a touring band. You toured for two to three years for the last album. What are your plans for this one? What did you do with all the down time after being on the road for three years? How did you adjust back to being home or off the road?

Robb: We took a three month break and after the second month, I was chomping at the bit to get back to writing and so was Dave, our drummer so he and I started jamming. In the studio, we had a new jam room. After two months, I was ready. I felt I had taken a break and I had musical ideas already going. But it was nice to be home for awhile. Like I said at the beginning, yesterday was our first show in 15 months. It was a good break that we had. After taking that much time invested in the band and touring, it was good, not that we weren’t working, we’ve been recording and we’ve been writing. It was good to have that break. 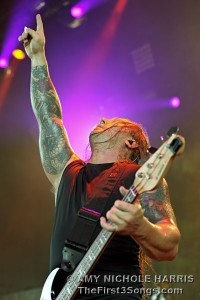 Amy: Any regrets over the years?

Robb: Fuck no. About what?

Amy: That would be my answer but most people say crazy stuff when I ask that. I would say no regrets usually.

Amy: You guys have been together for about 15 years. Where do you see yourself in ten more years?

Robb: This is what we do. I’ve been touring in bands since I was 18. I don’t know anything else. This is what I do.

Amy: You guys have toured with Slayer, Metallica, and Megadeth, all the biggest names in rock and metal. Have you ever had any conflicts on the road with other bands?

Robb: No, most bands are pretty chill. They are a lot more chill than most think they are. They like to hang, they like to drink. I mean everybody likes to have fun. I’m sure little things come up here and there. I find that in Metal there is a lot more camaraderie. There was a period when we were touring with a lot of radio bands, or we would end up on these radio shows. A lot of these bands that are pop bands, they are a pop band that are trying to differentiate into Metal. They don’t really know much about it. They don’t have the background. They’re not legit Metalheads.  They are more like, I don’t know, something else. Those bands are the hardest to deal with because they have the radio mindset. We don’t really get along with them.

Amy: That makes sense. You are going to be out with Megadeth for the Mayhem Fest. Were they an influence for you growing up? 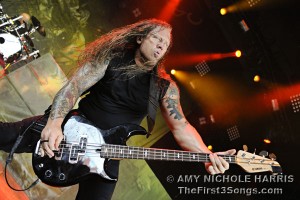 Robb: Yeah, they were, when I was a teenager, I was super into Megadeth. They wrote some really great stuff. You had to get used to a new lineup every album. They always wrote great music and they were always really talented players. They write some really awesome rifts.

Amy: A lot of the Metal bands I’ve talked to don’t listen to Metal at all anymore. It’s crazy, I’ve had so many Metal people talk to me about Lady Gaga this week. I find it a little bit odd. You’re not a secret Lady Gaga fan I take it?

Amy: So you’re coming through Cincinnati on the Mayhem and I’m sure you’ve been through there many times over the years. Is there anything in Cincinnati that has been memorable over the years?

Robb: Yeah. I don’t know what it is but most of the time for whatever reason, we have ended a tour many times in Cincinnati, and so we’ll all go get hammered and while completely fucking annihilated, we’ll all be like “CONEYS!”, stop the bus or walk to wherever they are. I have fond memories of the coneys. You can’t find that anywhere else. That’s very particular to Cincinnati.