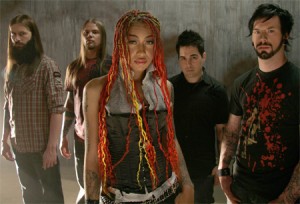 Straight Line Stitch is pure metal with a strong sound behind lead vocalist Alexis Brown. They have released seven studio offerings with the most recent The Fight For Our Lives released earlier this year. The album soared up charts reaching the top 5 in Billboard’s Heatseeker chart and the top 40 of the Independent Albums chart.

Amy spoke with Alexis to preview the Mayhem Festival that will be coming to Cincinnati on Wednesday July 20, 2011. In the interview, the two discuss the difficulties and uniqueness of being a girl in metal and tour pranks that have come along the way.

Amy: Tell me about the album The Fight for Our Lives. Tell me what it’s about and how it came to be.

Alexis: When we wrote our first album, we had so many people telling us what to do and how to do it. We had just gotten signed. It was like when you have a baby, you have to teach a baby how to walk pretty much. That’s what that first album was. When we started writing The Fight For Our Lives, we decided to cut the industry strings and make this more so our record. It’s a statement album. Right now, especially with everything the way it is with the economy you pretty much have to fight for everything. We decided that we were going to cut an album that was about the everyday struggles that people go through. We wanted to inspire people to fight, not to lay down and take whatever the world is throwing at us right now. It’s a statement album.

Amy: Do you guys write the music and the songs?

Alexis: Yeah. We wrote the music and the songs. We did the pre-production ourselves as well.

Amy: What’s your process to go about the writing with the band? Do you sit together? Do you sit separately and write?

Alexis: When we’re on the road, we’ll write from our laptops because on tour you don’t have a lot of room. So the guys will write some rifts on guitars and record them and when we get home we just threw out everything that we had on the table, rifts and things that I had written, and we just started piecing things together that way. We usually write separately and come back to the band rehearsal spot and put everything together.

Amy: So you guys are coming out on Mayhem this summer. What are you most looking forward to being out on the road with the tour?

Amy: I’ve talked to a couple girl lead singers in heavy metal bands and I always find it interesting because it’s not the norm. How did this come about for you personally?

Alexis: I have been singing all my life. I always wanted to be a singer since I was a kid. I knew I was going to be. I didn’t exactly picture myself doing metal. When I was younger, I was in an R & B girl group. I thought I was going to sing R & B. It was my brother who introduced me to hard rock like Pantera, Korn, and Ozzy. I fell in love with the genre and realized this is what I wanted to do.

Amy: So when you were growing up, who were your musical influences?

Alexis: My musical influences were groups like Fleetwood Mac. Stevie Nicks is my ultimate favorite singer. I love a lot of soul. I love Tina Marie and Brandy Crawford as well. As far as bands and stuff I’m in love with Glassjaw and 36 Crazyfists. Korn was definitely a big inspiration to me when they came out. They were a band that blew out the doors with that type of music. I realized that I wanted to do that. I wanted to do something different.

Amy: How did you get hooked up with these guys? Most of them are from Knoxville right? So how did you guys meet up and get together?

Alexis: No. It’s a long story. We’ve had sort of a revolving door with members.

Amy: I saw that and that was another question that I had. How much disruption has that caused with having so many changes in the band lineup?

Alexis: You have to find the right people. The band has been a band since ’99. I joined in 2003. And now we hail from all over the place. Our drummer is from the Dominican Republic but resides in Chicago. My other guitar player, Chris Norris lives in Florida the bass player Jason lives in Atlanta. We live all over the place. I had a band out of Clarksville, TN called FSN and we played some shows with Straight Line Stitch and we just became friends. When my band started falling apart and they needed a singer, they asked me to try out.

Amy: You have been with them for several years. I have talked to Lzzy Hale and the lead singer of In This Moment and I always ask the girls what the craziest part of being on the road in the van or in the bus with the guys?

Amy: Tell me a little bit about one of the biggest changes to your life. Basically, in 2008 you had the first record come out with the label. What’s the biggest life change for you since then?

Alexis: I think the tours. The tours have gotten way better. When we put out the first album, we were fighting to get on tours because nobody had really heard of us. We’re going out by ourselves and pretty much grinding it out. We put this latest album out and just with the work that we had done out on the road, it is starting to gradually pick up speed. We can tell by the tours that we have been offered that it’s definitely been a big change for us.

Amy: What’s the hardest part for you being out on the road all the time? I looked at your tour schedule and it’s pretty brutal.

Alexis: The hardest part, I think it is for everybody, is being away from family. Missing things like birthdays, even deaths in the family. It’s hard. You miss a lot of stuff being out on the road. That’s the hardest. Being away from loved ones.

Amy: I was listening to the music this week. You have pretty massive vocals in most of these heavy metal songs. How do you take care of your voice?

Amy: So you guys are going to be on tour this summer with Megadeth and Godsmack and all these amazing bands. Is there anybody that you are most looking forward to seeing or being around and trying to see?

Alexis: Oh sure. I’m definitely looking forward to seeing Machine Head and In Flames. I’m really anxious to check out all the bands. I really am. I want to see how people do what they do and see how they have gotten to where they are. I think it’s going to be really exciting. I’m looking forward to catching all the bands. But I’m excited about seeing Machine Head, In Flames, Perished and Kingdom of Sorrow.

Amy: You guys are on it for the whole tour right?

Amy: So tell me what your craziest tour story to date is.

Alexis: Well when we did our first big tour with DevilDriver, we had to cancel a show because I was sick. I couldn’t even talk. I slept that whole day and the next day we were able to make the show. It was in Kentucky and we met up with them in Kentucky. Our tour manager at the time told them that she’s sick and not going to be able to make the show. So we get to the show, the next show, the day after, and we pull up and DevilDriver’s manager, Eddie at the time comes out and says, “What the fuck are you guys doing here? What are you doing here?” We were just like, “We’re here to play. We’re here to play the show.” And he was like, “No. You guys are off the tour. You guys missed the show. Everybody else played on the stage. You guys are gone.” It’s our first big tour and we just got kicked off the DevilDriver tour. So I’m in tears, I’m balling. I’m flipping out. Low and behold, the whole band is out. You see the tour bus and everybody’s RV and I’m in tears. Eddie is like, “Why are you guys not gone yet. Get out.” We are like, “Ok. We are going.” And he was like, “What day is it? What day is it?” And we were like, “We don’t know what day it is. We are trying to leave.” And he was like, “What day is it?” And our guitar player said, “Holy shit, it’s April Fools Day.” They totally got us. All of a sudden everybody runs off the bus and he’s like ‘Don’t cry” and he’s offering me tea. It was so crazy because it was so real. They were, “Aww, we’re sorry but we had to do it to you.” It was awful but that is one of our best tour stories ever.

Amy: I’m sure you’ll have some much crazier ones than that after the end of your summer.

Alexis: I’m sure we’ll have some good ones. I’m trying to prepare myself.

Photo Provided by the Band.