Tony Lucca, a singer songwriter originally from Pontiac, MI, played for the first time in many years in Cincinnati at the Southgate House on Friday July 17. I attended to show to interview and photograph The Benjy Davis Project and I am thankful I arrived early to catch the Tony Lucca show.

Quite frankly, I was blown away with the strong vocal performance of this guy. I spent a few minutes talking to him after the show and found that he is as real as his songs. His song “True Story” is a real life account of his personal journey.

His fan base is large and I talked to many people in the audience that had come from all over the tri-state area to see him perform live.

Lucca has a long history in show business starting out acting early as a member of the famed cast of the New Mickey Mouse Club and other acting roles in independent films after graduating high school. Lucca also spent some time in Nashville to refine his songwriting abilities before ending up back in LA where he currently resides. All his experiences shine through on the stage as he performs.

He performed songs from his Come Around Again album. Tracks include a politically charged song, “Close Enough”, as well as heartbreak and love songs like “Pretty Things.”

Check out his latest Close Enough EP on ITunes with my favorite song, “I Can I Will I Do” or his website www.tonylucca.com.

My Tony Lucca show photos can be seen at CityBeat.com 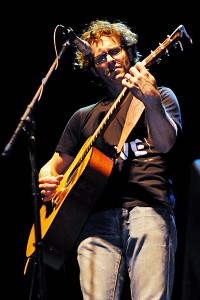