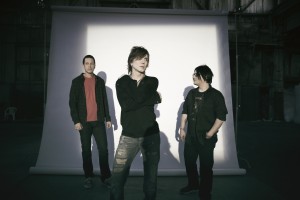 The Goo Goo Dolls have come a long way since they started in 1986 in the crumbling rust belt city of Buffalo, New York where the band was probably started for no better reason than to kill time, make some music, and hopefully get a few free beers from the clubs where they were lucky enough to get a gig. They have stayed together for over two decades and continue to create hits on the music charts. Their current single “All That You Are” is getting serious radio play and featured in the newest installment of the Transformers franchise, Transformers: Dark of The Moon

Amy spoke with vocalist and lead guitarist John Rzeznik about tour life, longevity, and the future of the super group. The band will be playing in Cincinnati at the PNC Pavilion at Riverbend on July 13t to support their current album “Something for the Rest of Us”.

On this album with his songwriting, Rzeznik confronts some of the issues that have become part of many people’s everyday lives.

Amy:  You guys have written a lot of songs over the years and had so many hits. What is the difference when you get asked to write songs for a movie soundtrack like Transformers or “Iris” from City of Angels versus just writing songs for touring or for a record?

John: I think the biggest difference is when writing the songs for a film, you sort of have your subject matter in front of you and the concepts right in front of you. The emotional aspects of whatever part of the film you are writing for are laid out in front of you. It gives me a bit of a format to work under, you know to work with. When you are writing songs strictly for yourself, sometimes you’re pulling stuff out of your hat. You’re sort of making up stories or reflecting on conversations you had with someone. I think it’s easier to write songs for film because you have that road map in front of you and put the pieces together.

Amy: When you’re writing songs for yourself I assume it’s more personal. You have to pull from the personal experiences over the years I’m sure.

John: Yeah. I think in all songs you wind up pulling something kind of personal out of it but definitely yes when you’re straight up doing your own thing it is very personal.

Amy: I was listening to the new song “All That You Are” this week. Can you tell me a little bit about it?

John: I actually wrote that song with a friend of mine named John Shanks. He is a really great songwriter and a great producer. We wrote that song just to write a song. The music supervisor from the new Transformer film heard it and said that he really liked it and had a spot for it in the film and we said “Sure, go ahead. Put it in.” They put it in and apparently it worked so here we go. I’d like to note that the song was not specifically written for that film.

Amy: Was there a story or a theme behind it that you drew from?

John: Yeah, totally personal experience. He and I were sharing our personal experiences in our relationships and a lot of the pitfalls of being a musician and trying to maintain a normal relationship with someone. It can be very difficult because of the distance between you and all the circumstances and the sacrifices that the people who love you have to make.

Amy: I often ask people if they have any tips for being a good husband or boyfriend on the road. How do you maintain relationships in general? I know it’s really hard.

John: Yeah. I have a great tip—Don’t cheat. That’s the first thing. The second thing is make sure you talk a couple of times a day. Don’t go to bed mad. Make sure they know that you love them. Send them flowers or a postcard every once in a while. And get them out to see you as often as possible.

John: I remember playing Bogarts a few times years and years ago. It was such a great rock-n-roll room. It’s still there right?

Amy: Yeah, it’s still there. I was just there last week. They remodeled the backstage area recently. It’s a really great place to play and hear music.

John: I remember the first time I walked in that room to play and I was like, “Wow, I can’t believe this place. It’s amazing.” That’s a great rock room. That was always fun. I love going to that diner at the bottom of the Carew Tower as well. They still had the little paper hats on and stuff. It’s pretty cool.

Amy: Cincinnati does have a great downtown area.

John: Yeah. It’s a lot like Buffalo in that the architecture is fantastic.

Amy: How did you guys hook up with Michelle Branch and Parachute as opening acts on this tour?

John: I have always been a big fan of Michelle’s and I think she is a really, really awesome artist and she has a new album out and we’re label mates. So when the idea came up, I just jumped at it because I think she is awesome and Parachute, they are just a really great band.

Amy: They are a great rock band.

John: They’re a new band. They’re a great rock band. They are really young. I think they could do great things if they get in front of a big enough audience. This is a band I really enjoy, I think I’ll actually get to see them play a few times. It’s kind of a selfish decision. They’re just a band that I like.

Amy: Do you ever give them advice?

John: I haven’t met them yet. I’m actually going to meet them today. But I will only give advice if they ask.

John: I moved out of California. I moved out of Los Angeles and moved back to New York State with my girlfriend and that was really awesome. It is good to be back home on the East Coast.

Amy: How about professionally?

John: Professionally, I’d have to say, I think the highlight is that we are able to go out and earn a living doing what we are doing. And that we can still get a song on the radio and the year is not over yet. We are looking forward to this summer because I think it is going to be a great time all around.

John: Yeah, some but not too many. Nothing I think about and get upset about. Having a collection of regrets when you hit your 40’s is part of the deal.

Amy: You guys have been together a long time. I guess the band is like family at this point right? Where do you see yourself in ten more years? Still playing music? Still touring?

John: I don’t think so but who knows? I didn’t see myself doing it for 20 years. I don’t know. You know what, as long as we can do something relevant but I don’t know. I can see myself moving off doing other things and working with other artists and things like that. That is something I really enjoy doing.

Amy: Is there anybody you would like to collaborate with? A dream collaboration that you haven’t worked with?

John: Sure, someone I would really, really love to write with, I’d like to write with someone like Regina Specter who is so opposite of what I do or somebody like that. I’m more of a fan of artists like that than the mainstream.

Amy: Our paper specializes in Indie music. Are there any Indie bands out there you like or are listening to?

John: Yeah, I really like that band Deer Hunter a lot. That’s really the latest thing I’ve been getting into. You know a lot of the bands I like started out as Indie bands and now they’re signed to majors. I really love Tegan and Sara. I really love Death Cab. I think they’re the best American band right now.

Amy: I’m sure you’ve answered this a million times. I’ve been a fan since you guys came out. I’m older and have been there since the beginning with you guys but I never knew where did the name of the band actually came from?

John: I found that in the back of a True Detective magazine. It was advertising for a stupid little toy and we just kind of went for it. I wish we had more time to come up with a better name. But we stuck with that. I think it’s too late to get rid of it.

Amy: I think so. I think it’s a little late to change it.

Photo Provided by the Band.