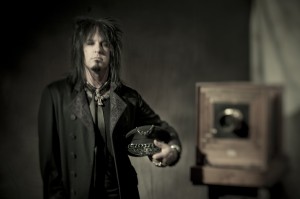 Nikki Sixx and Motley Crue embarked on their North American tour last week in Dallas. They promised to blow your heads off with music and set lists chosen by the fans. Nikki and Motley Crue will be performing in Cincinnati at the Riverbend Music Center on June 26th.

Amy caught up with Nikki in April to discuss his new book and the tour with Poison and the New York Dolls, and the influences of himself and the other band members.

Amy: What inspires you to do this?

Nikki: I feel very fortunate being in Motley Crue and we were inspired to do it our way. We were very aggressive about what we wanted whether it was changing our logo every time and changing our sound, changing our look. We really gambled and we bet on ourselves. I think that is just a part of who I am and this is a different way of packaging it with the book and the new music. You know what I mean? But for me, my message independently is no different than being in Motley Crue .

Amy: Well let’s talk about the tour for a minute. You guys are going to be coming through Cincinnati. I know you were resistant at first of kind of doing this getting the 80’s bands together doing this with Poison and New York Dolls. Can you talk to us about what you expect and what you are excited about on this tour this summer?

Nikki: I’m excited about  the fact that it is not an 80’s tour. You have a band in the New York Dolls who have been around for 40 years. They were an influence to everybody from Aerosmith, KISS, Guns N Roses, Motley Crue, and Poison. You have a band that has been around for 30 years and a band that has been around for 25 years. So you’ve got a survival story there that is full of hit songs.  I was really resistant to it because of what you said, an 80’s package. I don’t want to do an 80’s package because that’s not fair to the band. That’s not all we are. Yeah, we started back then but so did U2, so did Metallica and GNR. So, you have to be careful with that when you are a band because I don’t want to be one-dimensional. I think Motley Crue is more than that. We were punk and heavy metal mixed together. I had never heard music played like this before. We didn’t do it because it was calculated. We did it because that is what we loved. You have Mick Marrs who loves Paul Butterfield, and Nikki Sixx who loves the Sex Pistols, and Vince Neil who loves Cheap Trick, and Tommy Lee who loves Tommy Aldrich as a drummer and what he did. It’s unbelievable how it happened. We just decided to go out and play all these great songs. In the end, the fans really dictated our final position because they got to call it out and force the conversations to start.

Amy: I read in the book, “Jesus Saves Cleveland” story, do you have any Cincinnati stories that you can recall? Things that you look forward to  in Cincinnati coming back through?

Nikki: Well we have played there so many times and had such a great time. I don’t foresee any disasters in the near future.

Amy: No old stories for us from good times in Cincinnati?

Nikki: No, not for a family publication.