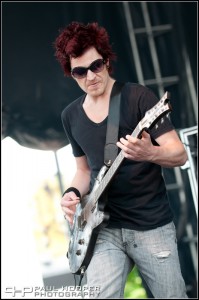 Crossfade is a hard rock band based out of Columbia, South Carolina. They are about to release their much anticipated third studio album We All Bleed at the end of this month from Eleven Seven Music. They have had multiple top ten hits on the U.S. rock charts, with their most critically acclaimed, “Cold” reaching number one back in 2004.

Amy spoke with lead guitarist Les Hall at Rock on the Range last month. The two discussed the new album and certain vices of the band. Crossfade will be playing in Dayton on Wednesday at McGuffy’s House of Rock.

Amy: I got your album this week, We All Bleed.

Les: How many times have you heard it?

Amy: I listened to it twice this week. The one thing I thought about it though is, I don’t want to call it depressing, but it seems like somebody did something to bad to you guys with songs like “Dead Memories.”

Amy: So what’s the theme, what’s it about?

Les: Well every song was written about a different topic. The last two records were probably more along the line of what you were saying. These songs were written individually then we tried to sequence them as a cohesive whole. I think the message of this record is more so the battle of good vs. evil and trying to bridge yourself from the bullshit of your life. Every song we wrote was just a dark song, just naturally dark music. I, myself, breathe dark music and listen to that stuff, and that’s just what comes out. Lyrically, it’s about this, that, and all these different things. We kept trying to write a positive song at some point, because like you were saying, it sounded like a very depressing record. Not from a single perspective, but just overall it was just very fucking dark. I think finally towards the end it picked up a little. The first song, “Dead Memories,” is supposed to kind of be the introduction to the record, it was written to be track one. It was written to be the “Fuck my past, here’s the future, I’m taking life by the balls and just go with it.” And it just goes on a journey of all the shit you’ve been through. Finally at the end it lightens up with a little bit of hope, and a little open your eyes. And the closing track, “Make Me a Believer” is looking for something to grasp onto or believe in. It’s not meant to be a depressing record, it’s a very dark and heavy record, a very moody record, it’s meant to be heard as a whole, not as a set of ten songs or track by track. Obviously when the single comes out, people are going to hear one piece of it, the most commercial piece you can get.

Amy: Have you picked it yet?

Les: “Killing Me Inside” is the first single off the record. There’s a video for it on YouTube. It’s track two off the record. “Killing Me Inside” is based off of nightmares that you have that are so vivid and real that they affect your daily life in general that you have a hard time blending what’s in your head going on from all the stuff you dreamt about.

Amy: The two I wrote down that I liked, without knowing a lot about it, were “The Dead Memories” and “Killing Me Inside.” The non-upbeat versions, I think I like the guitar and the drum rifts inside of them. It’s very aggressive. That’s what I like to listen to. I think it’s personal. You guys have had a couple lineup changes over the years. How do you guys go about choosing a new member to be in the band?

Les: Well they have to not suck and we have to feel like family. Mark Castillo, our new drummer, came down, we had a few drummers lined up, we had a few guys that we had talked about with Will Hunt, who played drums on the record. I basically left him responsible for finding us a drummer, and he was kind enough to do so. He had all these drummers he kept recommending and we had them send in videos and we gave them some of the new songs, we wanted to see how they play them.

Les: Yeah, somewhat of a video tryout so we could weed out ahead of time.

Les: Phone interview, you get the personality somewhat, but you don’t get the whole vibe of them as a player. Even if they send in a tape of them playing, you don’t see what they look like. Mark smashes the living shit out of the drums and is a just a total badass. And he brings so much energy to the gig and I talked to him for 5 months leading up to this and we had a few guys that we had been looking at that had sent in some video auditions. Mark finally was like, “Yo look, I have a blank weekend right now. Why don’t we just move this forward?” And we said, “Yeah. Somebody has got to do this shit.” So he came down and we played through a few songs and he was a kick-ass guy. He rocked everything he played and we went out that night, and he was family. Instead of telling him he had the gig, we let him drive back to Boston for 18 hours by himself, and he documented the entire trip of him coming down to Columbia and the entire trip of him going home. We took all that footage and put it into a webisode, and let him know via Crossfade Music TV that he had the gig, so he found out when the fans found out. 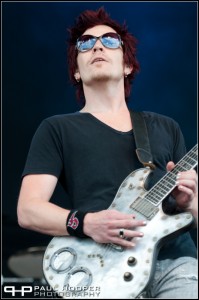 Les: I don’t know. I hope that all of our shit doesn’t break before we play and that the lights work, and that my guitar works, and that we play a great show, and that the fans have a blast.

Amy: Have you been through Cincinnati before?

Les: Yeah, I have played Cincinnati I don’t know how many times.

Amy: Well you guys have been around since 1999, a long time as a band. Were you one of the original members?

Amy: Still quite a bit of time, five years.

Amy: What are you listening to right now? What inspires you right now around music? Anybody here? You see anything today?

Les: That’s a tough question for myself. I listen to a ton of stuff ranging from Frank Zappa to Mike Patton to whatever eclectic music is going on.

Les: Did you say Gaga? The best version I have heard of Gaga is the kid on Youtube in the 6th grade. Blew my fucking mind. It was absolutely amazing. I actually, at that point, realized how beautiful that song was. But it took him playing for me to get it. No offense to her, she’s amazing you know, the whole art behind it. You could have made that kid an 80 year old grandpa and I still would have been moved. It was fucking amazing. Especially to see that type of passion come from the little kid. It was also funny watching the little girls in the background like holy shit blown away.

Les: He got a C+ on his test the other day but he can do that…. DAMN!!!! I think he, I don’t want to say this out loud but I will, he may lose his virginity sooner than other kids or at least get some nice make out sessions in the process.

Les: Yeah, basically because I know every fucking detail on the album. From the initial idea, to this layer to this layer, every single ounce from scratch to finish in the mix room, to mastering, all of the above. So I’ll never hear it the way it should properly be heard. Completely jaded, but I think it’s a great fucking record. I kind of do wish I could hear it having never known what it sounded like.

Amy: So I have to say, I listened to all the stuff, I’ve listened to everyone here this week, and you guys really stood out. Sorry I haven’t been a fan since ’99 but I’m converted.

Les: I wasn’t a fan since ’99 either. It’s all good. Give it about ten more listens and one track will stand out.

Amy: The other track that stood out to me was the “Dear Cocaine” song.

Les: What’s that song about?

Amy: I don’t know. I was going to ask you, what is that song about?

Les: It’s about lack of cocaine, and not necessarily meaning running out of it. More so, getting rid of it. I thought that song was a given. Everybody asks me but they want you to give the oddest answer…

Les: Well, there was a time in my life where I snorted blow all day and then I decided I had to get rid of it.  If I could speak for myself and possibly others in this band, we’ve probably dicked around with drugs in our lifetime and that is one that I personally hate. And the first lyrics, “Dear cocaine, I’m not your bitch, I’m not your whore anymore” popped in my head in my head in the shower one day, melody and all in the same key. I walked out to the piano wearing the towel and played it, it was a total afterthought. Then I played it for Mitch and Eddie one night while walking out of the studio and they thought it was fucking great and they developed the first verse into the story. Like I said it was a total afterthought for me, it was just something that made me feel, “Fuck Cocaine!”

Amy: Why didn’t you call it that?

Amy: So no deep, dark message?

Les: It’s pretty much about “Fuck cocaine”, some people might think it’s like “Oh dear cocaine.” We actually changed the lyrics at some point to make it a little more obvious that it’s an anti-cocaine song. That didn’t really work out so we went back to the original lyrics. Usually the first idea is the best even though I like the other variation as well.

Amy: You guys can always do it live however you want.

Amy: For the kids?

Les: For the kids, stay the fuck off cocaine! It’s a shit drug. There is one way you know it’s a shit drug. Music sounds like crap on cocaine. Your ability to connect your soul to your instrument is gone. It sounds like you’re going through the motions. Nothing good comes from playing like that.  I thought to myself, there’s a lot of other drugs, not that I’m promoting those, but there’s a lot of other drugs where music sounds fucking amazing and your ability to go into creative mode. To get in the creative zone, and write music, and to play your music, and be in the zone, certain things may cater towards that. Cocaine, speed of any sort never works like that. I always felt completely disconnected. So even if I were to ever have done cocaine in my life, I wasn’t doing it while playing music because it completely took the music out of the music.

Amy: Well alright. We look forward to seeing you play in Dayton.