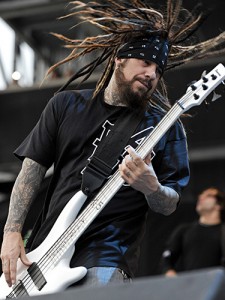 Korn is American Metal music. They are what every other Metal bands measure themselves against. They have been nominated and won awards from basically every music award ceremony, including two Grammys. Their nine studio albums demonstrate their lasting power and their latest offering, Korn III: Remember Who You Are shows the world that they aren’t going anywhere anytime soon.

Amy was able to speak with bassist Reginald Arvizu, or “Fieldy”, for the second time at Rock on the Range to discuss the direction of the group and his current side project Stillwell. He gave insight on his personal philosophies and his changes in his life revealed in his book Got the Life: My Journey of Addiction, Faith, Recovery, and Korn.

Amy: Last year when I talked to you, Korn III had just come out the week before, you had a new daughter. What’s happened in the past year? What’s changed?

Amy: Oh wow. So you’re going to do more. I heard the one song that’s out on iTunes. Are you still doing Stillwell?

Fieldy: Yeah. Stillwell is opening the tour in Europe. We leave on Tuesday. We’re opening the show for Korn. 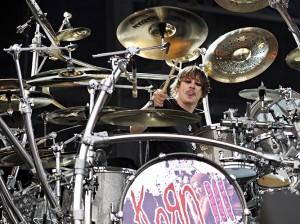 Amy: So you have a long night every night?

Amy: I know Joey did that last year with Zombie and Murderdolls. So it can be done, but you’re tired at the end of the night right?

Fieldy: No, I play guitar in Stillwell. I have a bass player. His name is Spider. I had to make sure he was good enough to fill my shoes. 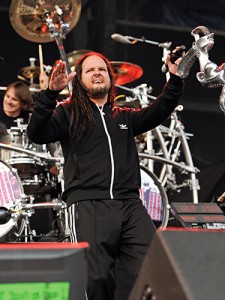 Amy: Since I met you the last time, I read the book. I had a lot of plane time the last couple weeks. I almost wanted to ask if I could interview your wife. Because I feel like part 2 of the book could be the other people that were involved in this and what was going on in their head at the time through the book. Has anyone ever done that? Talked to your family or your friends or tried to write it down?

Fieldy: I don’t think so. But if she’s ever out here with me, you can interview her.

Amy: Are you worried that your kids will read it at some point?

Fieldy: No, I gave it to them. My two daughters are here with me. They are 12 and 13 now. I let them see my life. They know what Christ has done in my life in changing my heart that I’m not that guy anymore. If somebody tries to change themselves, it doesn’t work. It’s a front or a fake. It doesn’t work. You really have to surrender. You can tell by people’s actions if they are really a changed person.

Amy: The other thing that struck me about it was, I didn’t realize again when I talked to you last time, that you have known the other band members for 25 years. You have known each other since you were small children. It gave me a new appreciation for staying together and still being friends. To be able to be together that long is amazing.

Fieldy: Oh yeah. It is amazing to still be together this many years down the road, we’re not even friends, we’re more like family. When you go through that much with somebody and you’re still friends with them, it almost becomes family.

Amy: Is there anybody in the book that you have not gotten forgiveness from or you really wish would talk to you after all those years of the bad stuff?

Fieldy: I really don’t think so but someone else might think that. Like, “He did this to me” but sometimes you don’t even know that you hurt somebody. And they can be like ten years later, “Hey you know what you did to me?” And I don’t remember doing that. For people to carry hate is a lot of energy. Most of the time, those people don’t even realize they did it, it’s just part of their day. So I’m going to say for all the haters out there, let it go. Something for me that I learned reading the Bible every day, learning more and more, God said that he would give us love and joy and his peace but vengeance is mine. He’ll take revenge. But a lot of people don’t understand that unless they are in the word everyday and they start trusting in the word of God and knowing. Because that’s hard to do, letting go. Really, you’re going to do that after that person did that to me. That’s hard to do.

Fieldy: Yeah, but I wish we could forget. 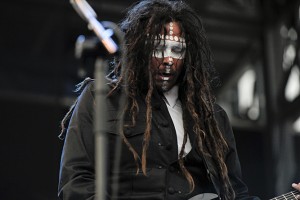 Amy: It looks like it’s 6 o’clock and the world didn’t end today so that’s good.

Amy: I’m with you. I’m with Fieldy when the world was supposed to end.

Fieldy: I wanted to see what that guy has to say today because he was so confident. I don’t really understand where he got that from.

Amy: It’s very random. It’s scarier that people followed it and believed it.

Fieldy: I can’t even comment on that. I wish I could say something.

Amy: It’s like who has these balls to take that stance. It’s so crazy.

Fieldy: It’s like it is so arrogant. I don’t even know what the word is. I think next month everyone will forget about that guy. I think that bin Laden will be more remembered than that guy who said he was a prophet. That was kind of goofy.

Amy: What can we look forward to tonight with the show?

Fieldy: We’re going to be doing a great set that we put together, probably one of the best sets we have done in our whole career.

Amy: Rock on the Range is always fun. A lot of energy. The crowd is always into it at that time of night.

Fieldy: We’ll see what happens when we hit the stage.

Amy: Is there anybody you have gotten to see play or were looking forward to?

Fieldy: I just got done watching P.O.D. After all these years, I’m like I know all these songs. I know that song. They had a lot of hits.

Amy: Are you going to do another one (a book)?

Fieldy: If God wants me to. It comes really easy, and then it’s not. I tried and it’s not coming right now.

Amy: How long did it take you to write?

Fieldy: A year and a half. I can’t really say what I’m going to do. Because it seems like today, it’s just the will of God. It just happens without me. I’m just open. It just happens.