I sat down with local singer/songwriter Kim Taylor after her show at Southgate House this week to chat about what inspires her songwriting from the past and present. Family was a theme through our entire conversation and you can tell she has drawn on her family for influence in her songwriting her entire life. Currently, she seems perfectly content to write and play great music and have her son be her biggest cheerleader.

She talked about inheriting her father’s record collection when she was young with classics like The Beach Boys, Johnny Cash and Marty Robbins that continue to be sources of inspiration for her today. During her set she played a soulful cover of Chocolate Jesus by Tom Waits stirring childhood memories from the south.

I asked what was the first album she purchased with her own money and learned it was Michael Jackson’s Thriller and the latest purchase was the new Elvis Costello record, Secret, Profane, and Sugarcane.

Kim’s passions in life are family, music and writing. Her songwriting with influences from the past and present has a way to capturing life’s everyday moments and making us feel those moments in our own lives as she sings the words.

She has signed licensing agreements for her music to be used on many major TV projects and networks that include CBS and MTV. The new TNT show HawthoRNe with Jada Pinkett Smith used Taylor’s I Am You in a recent episode.

Kim has a new record in the works and will be on tour with Kasey Chambers in August and locals can catch her next with her full band in Fountain Square September 4 and at the upcoming MidPoint Music Festival. You can download her current album The Greatest Story EP on iTunes.

Fans can also see a spread about Kim Taylor in the August issue of Paste Magazine where her work is highlighted in the music issue.

My Kim Taylor photos can be seen on CityBeat.com 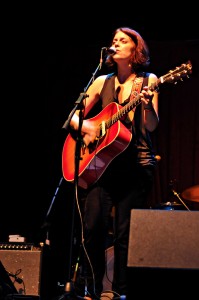 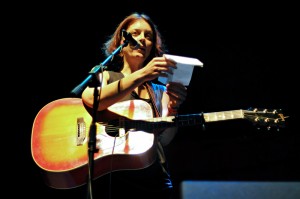