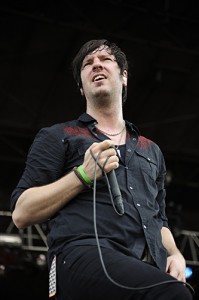 Cavo is an example of patience in the world of hard rock. They have been performing since the early 2000’s before breaking into successful, mainstream rock with a 2009 number one single “Champagne.” Since 2002, they have released five EP’s and one largely successful studio album Bright Night Dark Days, reaching the top 50 on the US album charts.

Amy had a chance to sit down with guitar player Chris Hobbs and lead singer Casey Walker before their performance at Rock on the Range. They discussed the band’s change in sound and the pending end of days.

Amy: You guys had “Champagne” one of my all time favorite rock songs. I love it but I want to hear about the new music.

Chris: I think the new album, compared to the last one is going to be a little edgier. We tried really hard to step outside of the box and tried to write different types of songs. So I think it came together really well. It’s going to be edgy.

Casey: Yeah definitely. Like Chris said, we definitely tried really hard to step outside of the box and not just right the same ole songs again. But we never lost the thing that made Cavo, Cavo. I believe this album is very good. Our producers have killed themselves from demo to now.  They sound great. 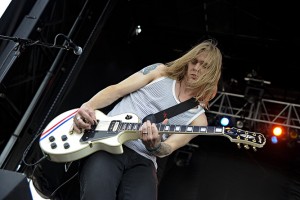 Amy: Did you just say you were going to go back into the studio?

Both: We’re in the studio now.

Amy: So this is like a break. They let you come out and play for a few minutes.

Amy: Who are you looking forward to seeing today? Are you seeing anybody today or tonight? 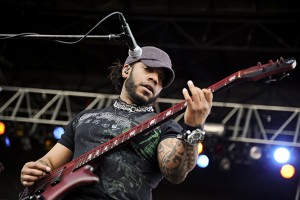 Casey: We toured with those guys for a while. They are always great. Avenged Sevenfold.

Amy: I’m just happy the guy isn’t jumping off and hanging himself tonight. It creeps me out.

Casey: I’m just hoping the world doesn’t end at 6 PM. It’s funny because they say the world is going to end at 6 PM but it’s like in your time zone. That’s what God cares about, Eastern Standard Time. I want to call someone in Australia and see if it happened already.

Amy: It’s already past 6 PM in China, we’re already past it I assume. They are still there so I am assuming we are good to go.

Amy:  I am a big baseball fan and the Reds just kicked the Cardinals ass a couple weeks ago.

Chris: Do not even go there.

Amy: I didn’t know if you guys liked baseball. 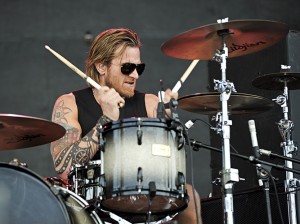 Casey: St. Louis is a huge sports town and we are all huge Cardinal fans.

Amy: You guys just played the first annual Carolina Rebellion. It was the first year for that.  How was that? I saw some amazing photographs.

Chris: It was cool. It was a very cool concert but it was pandemonium. We barely got there to even play. The highway was literally shut down.

Amy: Well Charlotte always has bad traffic. They don’t have enough roads for the traffic they have on a normal basis.

Chris: We had to get a cop to let us drive on the side of the highway in the grass for miles just to make it there in ten minutes.

Casey: We may or may not have bribed the cop.