Alter Bridge is a super group Metal band with members of the band Creed, Mark Tremonti, Brian Marshall, and Scott Phillips with Slash solo project frontman, Myles Kennedy. The band released their third studio album at the end of 2010, ABIII, through Roadrunner Records. Their first single “Isolation” reached number one on the Hot Mainstream Rock charts.

Amy reached out to lead vocalist and rhythm guitarist Kennedy at Rock on the Range this past weekend and discussed the status of the band and a hectic schedule to balance life, family, and band.

Amy: I actually saw you here last year with Slash play and listened to your album all week to prepare. I love ABIII and had some questions for you if you don’t mind. You guys had a lot of songs to pick from on the album, how did you guys narrow it down?

Myles: Well, through democracy. We do it the ol’ American way in Altar Bridge. That’s always the challenge is trying to weed out the ones that aren’t going to make the record. Because everybody kind of gets their personal favorites and you get attached.

Amy: You guys seem like workaholics to me a little bit, especially you. How do you decide the schedule, tour with Slash, doing Altar Bridge, them going back to Creed? How do you guys work out the scheduling? 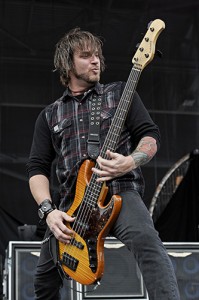 Myles: It’s a pain in the ass for our managers really. We just talk about it and prepare a year in advance for what’s going to come. It’s a challenge, it’s not easy. It’s asking a lot of my family when I’m pretty much gone non-stop.

Amy: Do they come out with you at all?

Myles: Yeah. Definitely. We have a system and plan so I do not neglect my wife or my dog.

Amy: I read somewhere that your wife is ok but your dog isn’t.

Myles: My dog is very pissed at me right now.

Amy: So what did you guys do last night?

Myles: I sat in the hotel room and watched cable TV. So boring.

Myles: I needed it. 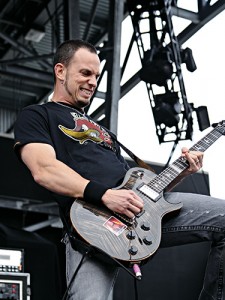 Amy: You guys have had a lot of ups and downs with critics of the music, when you first came out. But you guys have kept going and this third album has gotten huge, huge, positive press. How did you guys handle the down times?

Myles: You don’t really pay attention. I learned early on to not to read press, even good press or bad press. I just do what I do. I think when you know that everybody is scrutinizing every move, it can freak you out. So with me, I focus on the music.

Amy: My favorite song on the album is “Ghosts of Days Gone By”. You guys have a lot of fantastic songs with stories. Could you quickly tell me what the story is with that one?