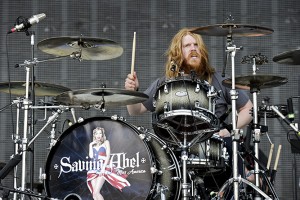 Saving Abel is a widely popular rock band with Southern roots. They reached their biggest fame with the song “Addicted” in 2008 with their platinum self-titled debut album. They have not slowed, releasing Miss America in mid 2010 that reached number one on the US Hard Rock charts featuring number 1 single “The Sex is Good”.

Amy caught up with drummer Blake Dixon at Rock on the Range to discuss the band’s second album. They also spoke about their strong patriotism and their Southern Rock roots that have them set to stay in the charts for years to come.

Amy: I just caught your set. It was pretty phenomenal. I’ve been listening to Miss America to prepare for this week. I know you guys are really tied to the military and have really supported them over the years. Can you tell me the story behind the title of the album because I know it’s related to patriotism?

Blake: It definitely is. When you hear Miss America, of course you think of a beauty pageant. But that’s not what it’s about. We actually had the opportunity to go to Iraq and play for our troops through the USO and it was an amazing experience for us. Although we loved it, it was still to the point it was a culture shock and after about two weeks of being out there, we got a little bit of a taste of what they go through on a day to day basis. We were having a hard time deciding on what to call the album and we had a lot of ideas pitched back and forth. It was the one time that we all agreed on something immediately… Miss America. And we were writing the song, and so it was like Miss America, that’s what we need to call it. So that’s how that came about.

Amy: One of my favorite tracks on the album is “The Sex is Good”, it just jumped out at me. So what’s the story behind that one?

Blake: I think it’s pretty self-explanatory. I say it’s about being in a relationship for all the wrong reasons and Jason would say it’s for all the right reasons. So I guess it’s for your own interpretation. But I guess the title says it best, the sex is good. 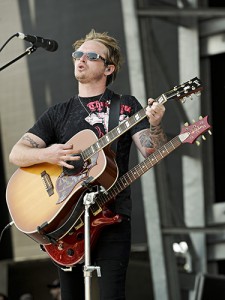 Blake: Nope. Pretty straight forward on that one.

Amy: You guys are from Mississippi, and I wanted to know what your biggest Southern Rock influence was growing up?

Blake: There are so many, Molly Hatchet, Lynyrd Skynyrd, .38 Special, there are so many great bands that are from the South and we take a little bit from all of them. I can’t say that I have a favorite but those are definitely some of them.

Amy: You guys had the huge single “Addicted”, I’m sure you play it every night for your whole life. I guess you’re happy to do that. Was there pressure with this album or is there always pressure to follow up on a such a huge hit like that? 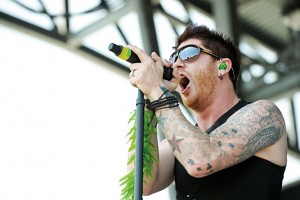 Blake: Yeah there is always pressure, but we’re confident and it’s looking really good that Miss America is a great follow-up album and it’s doing really well. We love every song that’s on there. When you write an album on the road, you think that it may be watered down a little bit and thrown together but it wasn’t. Like I said, we love every song that is on the album. We are really happy the way that it turned out.

Amy: Do you have any plans to go back overseas with the military?

Blake: Absolutely, we are just waiting on the opportunity.

Amy: One of the controversial questions, Hinder was here yesterday. Did you guys get into any fist fights?

Blake: No. We love those guys. They’re great. All that stuff is water under the bridge. We were half-serious anyway. So, no of course not. They’re our good buddies. We all got press from that.

Amy: Everybody’s good right? Their album is great right now and they put on a good set. 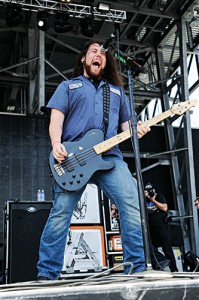 Blake: We love those guys. They are some of our favorites.

Amy: You guys were here yesterday, you caught some shows I assume.

Amy: What was your favorite yesterday?

Amy: I actually saw Scott. We were watching the Korn show together at one point. So I saw you guys out in the crowd.

Blake: Yeah, I was front of house. I wanted to hear the full effect. I didn’t want to be side stage. You know I may be a wuss but I don’t like moshing. I’m sorry. I like to listen to the music, I don’t want my fucking nose busted.