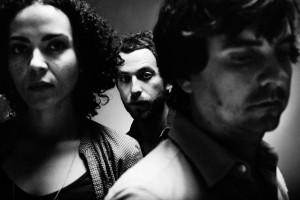 Eastern Conference Champions is a Philadelphia based Indie band that has been gaining steam through their soundtrack appearances, gaining most fame from The Twilight Saga: Eclipse soundtrack with the song “A Million Miles an Hour.” They have also gained fame through songs appearing on the small screen in Melrose Place, Friday Night Lights and Gossip Girl. They have given audiences two studio albums, with their most recent offering Speak-AHH being released last month.

Amy spoke with founding member Josh Ostrander about their new album and life on the road. The band will be playing alongside Neon Trees on Thursday at Bogarts in Cincinnati.

Amy: Have you played at Bogarts before?

Josh: I don’t know. We’ve been doing this for so long, I don’t even know anymore. I’ll know when I walk in.

Amy: You’ll know when you see it. I was just in there Friday night and they had remodeled the whole backstage area and painted. I almost didn’t recognize the place. It’s a really cool place to play. One of the questions I had is about the tour. You have been out on the tour for just a week with Neon Trees right? Any crazy stories yet?

Josh: Not too crazy yet. Let me think. We almost asked a homeless man to jump in the van to be our roadie.

Josh: No, we decided not to. It’s just the three of us traveling, and it’s so much driving. We have just been like, “Maybe if we just asked a homeless guy to jump in. We’ll give him a 40 and a pack of smokes and have him drive.” We’ll give him the 40 after we get to the club and then he can help us load in. But we were so tired, we played Philly last night and we’re from Philly, so it was a late night. So we almost did it today.

Amy: So I got your new album two weeks ago when I was traveling a lot so I got to hear it. I really liked it. So can you tell me a little bit about the new album?

Josh: We’re super proud of it.

Josh: Speak-AHHH yeah. The live show right now, we’re pretty much primarily playing off the record so that’s pretty cool. We’ve been moving a lot of copies on tour which is great. But yeah, the record just came out really good. I think it’s got a nice mix. It moves really well. Like the piano stuff on there I think fits really well next to the rockin’ stuff. It’s an eclectic mix that I think we got going on on the record.

Amy: So hopefully you guys will find some new fans in Cincinnati this week and move some records.

Josh: That would be great. I love Cincinnati.

Josh: I don’t know, drink. I’ve been to a few bars there. I don’t remember the names of them but I always remember having a good time there.

Amy: We have good bars.

Josh: You do have good bars.

Amy: So I know you guys had a record deal and you walked away from the record label right?

Josh: Yeah, I mean it came time. We put out good shit through Interscope, but  we signed a two album deal with them, and then it came time to do the next record. And the band was just like, “This is not working.”

Amy: Why? Was it taking away your creativity? Were they trying to control it?

Josh: No, they kind of let us get away with anything. They let us do whatever we wanted. But I just think they didn’t know how to work a band like us. They had a lot of pop rock groups like Weezer and bands like that and they knew exactly the formula and how they should release those records. Then they had ECC on there and they were hoping it was going to be like their critic’s choice kind of band. I don’t think they knew how to handle us. They were sending our records to the same people they sent the Weezer record too or other bands like that. They just didn’t have the right connections for us to take that next step. So we asked to get out of the deal and they were like, “Yeah.” It was sad because everyone there was really great. It wasn’t a “Fuck you” kind of conversation.

Amy: It was just not a good fit?

Josh: Yeah. It was just we were gonna try to go do this on our own. So we left. And we took some of the money we made from the deal and invested in a studio. It’s a shitty studio but we can record our own stuff. So we started recording our own stuff and things started going really well for us. You know from getting Gossip Girl to Melrose Place or Friday Night Lights, things started happening. We were kind of like, “This might not be the coolest thing to do but it’s paying our rent.” It’s making us be able to keep doing this and then we got Twilight. That was all based off stuff that we have done on our own. We had no representation. So when it came time to put out Speak-AHHH after we got on the Twilight soundtrack, the labels started calling again. And we took a bunch of meetings and we were faced with that decision again where it’s like “Do you want to go through this rollercoaster ride again?” And we were like “No, let’s just keep doing it ourselves.”

Amy: I’m talking to more and more bands that are trying to do the same thing. The only problem that they’ve been presented with is distribution, if you want to get the CD in stores and things like that. It seems very expensive to do on your own.

Josh: It’s really expensive to do certain things. The only thing I really miss about being on a label is the tour support. They would be like, “How much will it cost to do this tour?” and they’ll give you the money to go do it. That was the best. So now we have to be really careful with money, that’s why we don’t have anybody out on the road with us.

Josh: Yeah, we just got a van. We have to keep the overhead really low so that we can keep playing since we’re taking off work to go on tour. We’re not rich by any means. But we each get a PD, and we really try to sell merch because it’s filling up the gas tank.

Amy: Are you doing this full time yet?

Josh: It’s a full time gig. I’ve been playing with my drummer for 13 years and we’ve been touring pretty much non-stop.

Amy: So you don’t have day jobs or anything going on?

Josh: We do. Greg’s a bartender. Melissa teaches guitar and I do like freelance recording or artwork. Stuff like that.

Josh: She actually plays guitar. So we both play guitar and Greg has like this little tape thing with the bass on it. So Greg plays to a click with the bass. We’ve been auditioning bass players forever but it just seems like, you know hopefully you’ll see the show and see how it works well as a three piece.

Amy: Yeah, it’s just funny because I saw Sick Puppies two days ago and they are a three piece with a female bass player so I thought of you guys a little bit. It sounded great actually. There’s a lot of bands that I saw with eight or ten members and it sounded really produced and they couldn’t play right without the tracks. And Sick Puppies kind of killed it with just the three of them.

Josh: That’s cool. I haven’t seen them yet. I want to see them soon.

Amy: So we were talking about the new music. The other question I had specifically for you is, you guys say you do everything. You’re driving the bus and you don’t have help. But you also do the graphic design for the artwork and the stuff on the label?

Josh: Yeah, we do all the artwork. We do all the re-mastering. We actually had help mastering the record. But we record, engineer, and produce. We do it all and we take great pride in that. Seeing the whole process through every step of the way from writing the songs to making sure the CD label looks correct.

Amy: It’s just like your baby a little bit.

Josh: It’s our baby. Exactly. We thoroughly love the records that we put out because of that.

Amy: Do you have graphic design background or how did you get into that?

Josh: No, I am a total hack. I taught myself how to do Photoshop and I’m sure I’m doing it all wrong. Every time I send the files into the printer guys, they say, “Can you do this?” And I’m like, “Nope.” And they are like, ‘Can you export this?” And I’m like “I don’t know what you’re talking about.”  But I like that. Because I taught myself how to play guitar, we taught ourselves how to use Pro Chords, we taught ourselves how to use Photoshop. And it’s like I’m glad I don’t know how to do it correctly because it kind of gives it a like this shitty little vibe to all of our stuff.

Josh: Just make it look cool but don’t change anything is what I usually say.

Amy: I agree. So I really am looking forward to the show. I really like the album and look forward to hearing it live. I have never seen Neon Trees either.

Josh: Yeah. They’re killing it right now. It’s just been a really good tour. We’re so happy to be on this tour. It’s great. Everybody is a sweetheart. It’s a blast.