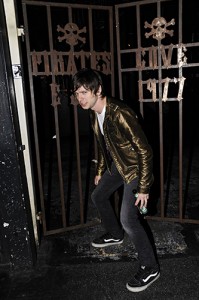 Amy caught up with the band at their show in Cleveland on Monday night at Peabody’s Downunder. The band played a performance of tracks off their current album. Their show was high energy and their chemistry was undeniable as they played like they were in front of an arena-sized crowd even on the small Peabody’s stage. Gould’s vocals were great as he belted out their hits like “Sex Ain’t Love” that is currently getting lots of airplay on Octane Sirius Radio.

This interview with Scott Gould is an introduction to the band and gives insight into the up and coming act that is grinding it out on the road each and every night gaining new fans and support.  Scott talked to me about driving the van coast to coast over the past few months to Seattle and back playing with Sick Puppies and Saliva on their current tours.

They even had a near accident while driving across Montana and hitting black ice spinning the van and trailer.  Luckily everyone was okay and the band is creating stories they can talk about for years as they play each night and create new fans. Scott talked about being inspired and humbled in Seattle playing clubs where Alice and Chains and Nirvana got their start with pictures of them hanging on the walls above them as they performed.

Amy: I wasn’t familiar with your band but I listened to the music this week and I love the album. The “Sex Ain’t Love” song is fantastic. Did someone inspire that song?

Scott: It was a song we originally had called “Center.” But we changed it up and messed with the lyrics and when we were writing the chorus and had the melody already, then we were joking around that sex ain’t love and it just kind of stuck. The verse lyrics started meshing with it. No real cool story about it but it just worked out and we really like the message the song sent. So we were like, “Alright, screw it, let’s do it.”

The band now hands out free condoms in support of song at their live shows.

Amy: I thought there may be some friends with benefits girl out there somewhere.

Scott: No. I mean I guess they are out there and they do exist but it wasn’t really about that.

Amy: You guys have been playing together for about 10 years which is really odd for a bad that wasn’t signed. Usually, I see a lot of lineup changes. What’s the secret for you guys staying together?

Scott:  We all grew up together so I think it’s that. It’s kind of a brotherhood that we started in middle school . We never wanted to go to college and this is what we wanted to do. It took us a long time to get to the point that we are now but we are enjoying every second of it.

Amy: Were your parents supportive?

Scott: Yeah. Our parents were actually really supportive. I took my Dad out to IHOP one day and told him that I wasn’t going to college anymore. I went for about three months and told him I was dropping out to join a band. I was expecting a yelling match but he was really, really cool with it.

Amy: I couldn’t imagine having that conversation actually.

Scott: I was pretty nervous. But I’m glad I did because it worked out for the best.

Amy: How has life changed for you guys since you got signed to Road Runner?

Scott: No sleep. Lots of driving. But we get to play cool shows. Life hasn’t really changed other than touring. Charleston is a pretty chill, laid back town. That’s where we are all from. We have been playing there for years. So it’s not like instantly we are rock stars kind of thing. 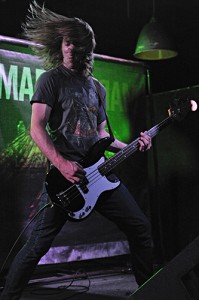 Scott: The hardest part is getting rest. You load in, you sound check, you sit around, you play the show, then you’re out after the show doing merch and talking to fans. And that doesn’t wrap til around 2 A.M. Then, depending on your drive to the next venue, you either crash out and have to wake up early or you get in the van and move out to the next spot. Like tomorrow we are playing Ft Wayne, Indiana and that’s like a 9 and a half hour drive from where we are today in Syracuse. Tonight, I can’t drink and party so I have to jump in the van and drive my three hour shift. It’s pretty grueling but the payoff is rewarding.

Amy: You should enjoy this time I guess. I’m sure people are telling you that.

Scott: That’s what everybody keeps telling us. I think that’s something that people say.

Amy: I’ve been in some of those vans doing interviews and they are a little scary to me actually by the time you get to where you are going.

Scott: I just gave her a nice bath so she is nice and clean now.

Amy: I read that you guys had another name prior to this to the point that you got it tattooed on your bodies and then you actually made the name change to Madam Adam. How did that all come about, what was the name before, and how did you come up with the new name?

Scott: We were the called the “For or Agynst” and everybody kept murdering it in the press calling it angst or ag-why-nst. So when we were like fifteen or sixteen years old we got a tattoo on our bodies in a trailer in Summerville, South Carolina. Some backwoods stuff.

Amy: How did you come up with the new name?

Scott: I like certain things about the English language and palindromes are very intriguing. So I started there and just worked around on the computer and found that. It wasn’t copyrighted. It wasn’t taken. So we were like, “SNAG!” And plus it sounds a little sleazy like some transsexual or transvestite or something but we liked it.

Scott: Yeah, and it looks good on a shirt too.

Amy: So who would you like to tour with? Who is your dream band to go on the road with?

Scott: The new record, we’ve been killing it in the van. So, I’d love to go out with those guys. They are just the quintessential American rock band. That’s really what I see our band as. No frills, no thrills, rock n roll.

Amy: You could upgrade play and people’s house garages.

Scott: I’d do that in a heartbeat with those guys.

Amy: Tell me a little bit about the album. What were the influences of it? Do you have any special stories behind? Or did you guys just put it together over a long period of time?

Scott: Yeah, it’s the work, the blood, sweat, and tears in that record.  We have songs on there that are five years old that we have re-vamped. And then there are some brand new ones that we wrote while we were recording the record and the label actually liked that we got to put them on the record. There are so many stories that I don’t know where to begin. It’s like a diary to us. It started when we were first really getting serious about the band doing it as a career. And then all the way up to when the record was being recorded.

Amy: So tell me the story about your favorite song on it.

Scott: There’s a song on it called “These are the Days” that I co-wrote with the lead singer of the Exties and it was supposed to be for our band exclusively but they were in the studio right after I left L.A. and  they basically stole it from us. They put it on their record without telling anybody. It sucked. It was what it was. We were talking with our label and it’s still a really great song. I love the song and I love the lyrics. It’s just shrouded with crap because of what happened. I think on the record the song came across really well. Plus, I like to sing it. 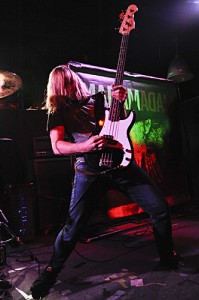 Amy: But you lost your friend in the process?

Scott: Yeah, I wouldn’t call him a friend anymore.

Amy: It’s summer and it’s festival season getting started. Do you prefer to play smaller venues where you know it’s your core fan base or do you like playing big festivals where you can try to get new fans?

Scott: I actually like both. The intimacy in small clubs is really cool. It’s just right there, you and the fans. But I also like running around on a huge stage and playing outside. There’s something really freeing about that.

Amy: There’s nothing like a festival if you can get the crowd into it.

Scott: Everybody’s drunk by 12. The atmosphere is really cool.

Scott: We haven’t. We’ve driven though Ohio and played Wisconsin with Halestorm. 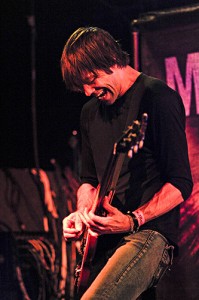 Scott: Yeah, they’re great people. Besides being an awesome band, they are stellar, stellar people. Youcouldn’t ask to be on tour with anybody better than that.

Amy: So this will be your first time. Well we are looking forward to it.

Scott: First time in Ohio. We are excited. There are a lot of first dates for us on this tour.