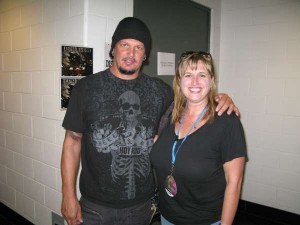 Disturbed is one of the most popular metal bands in America. They are from Chicago, Illinois, formed fourteen years ago, hitting the mainstream in 2000 with the album, The Sickness. Since that successful debut, the band has compiled four other studio albums, including their latest recently released offering, Asylum.

The band features original three members, front man, David Draiman, lead guitarist Dan Donegan, and drummer, Mike Wengren along with fourth member, bassist John Moyer. Amy had a chance to talk with Dan Donegan at UPROAR Festival in Columbus to publicize the new album and get writing and life perspectives of the band.

Amy:  I just wanted to talk to you about the new music you have coming out. How’s that?

Dan: It’s coming out next week, next Tuesday. So we’re excited about it. We’ve only been playing a couple new songs live so far just because it hasn’t been released yet. So just, the single, Another Way to Die and Asylum, the title track we had released just on the internet. So we’ve been including that in the live show too.  But excited about it, our fifth album. And we’re very happy about its body of work. Hopefully the fans will enjoy it as much as we do.

Amy: What’s your favorite track to perform live? I know you do a lot of the guitar solo work.

Dan: It’s really hard to pick a favorite. During the set, every song has a different moment. We stepped up our production on this tour. There’s a different vibe in every song. I still really enjoy playing the old material too. Which I thought back then, will there be a day where I get sick of playing Down With The Sickness or Stupify? Are we going to get tired of it? I don’t get tired of it because the fans keep those songs alive for us. The second they hear the beat to Down With the Sickness and the roar of the crowd. It keeps life injected into those songs and it keeps it fun for us to play. It’s definitely fun to play new material because it’s something fresh and something that we haven’t played that much of too. So we look forward to some of the new material off this album once it finally comes out next week to start playing some of the other tracks.

Amy: I know some of your songs are really personal for the band like Inside the Fire and others.  What is your writing process? I read that you guys don’t write together that much.

Dan: It always starts with riffs I come up with first. I’ll kind of piece together a rough structure of what fells good musically to me. I’ll have Mike, our drummer, come down to our house and we’ll work with different beats around the riffs and then we’ll record it. Once it sounds good musically, then we’ll give it to David to work with it a bit and see what that sparks out of him. We’ve been fortunate that just about everything I give him, he’s been inspired by. And then, on top of that, he’ll just come up with a melody and scatting over the top of that. No real words just yet, just trying to find a rhythmic pattern to his vocals within the music. And then once we finalize that, he’ll focus on the lyrics last.

Amy: Have you had any “Behind the Music” moments? As you guys have started out, you guys were pretty successful from the get-go, you didn’t have a lot of hard moments.

Dan: We’ve definitely had hard moments. We’ve always had to battle from the beginning of being a local band of really having to work hard and prove ourselves and jump over hurdles to get where we are at. Which is fine with us, I think that makes us a hungry band and a hard working band that’s always striving to do more. We’ve never had things just handed to us. When we were a band in the mid-90’s just trying to play Chicago. A lot of those clubs didn’t want anything to do with us. We were just this hard rock metal band from the suburbs and at the time, downtown was more of a clique alternative scene with the success of bands like Smashing Pumpkins. All of those types of bands kind of dominated Chicago in the 90’s. So we were getting shut down from a lot of places we wanted to play. It was more of us playing more local club scenes and local bars and taverns, anyone who would take us. It’s always been kind of that battle along the way in climbing that mountain and working hard for it. It’s been a great run. We’ve been together for over 14 years now, professionally doing it for 10 or 11 years. It’s been great. It still feels like we’re climbing that mountain. We still feel like things are gradually getting bigger. It never felt like, to us, an overnight success at all, it was a gradual build. We didn’t come out of the gate selling tons of records. It took time to get to that point. It took time building that fan base.

Amy: What’s been your most satisfying career moment? I know you guys have had Grammy moments. What has it been for you personally?

Dan: There’s so many things. I would probably have a different answer every day if you asked me. Definitely some of the big highlights, playing in Kuwait for the troops comes into my mind. Just to see the kind of impact that our music has had on the military and how inspiring it has been for them.  That was pretty touching to go over there.

Amy: Has that been recent? I know you have done that over the years.

Dan: We went on the beginning of the last album cycle for Indestructible. That was the first show back for us, going to Kuwait. So that was a big highlight in our career. It was a touching moment to spend a few days with the troops and meet them and learn a little more about their personal lives. We turned it more into more about them than it was about us. Of course, when we are out here in this environment, it’s a festival, it’s the show, the band is the focus.  The events with the military are all about giving the troops a little taste of home and a little escape for a few hours to enjoy some music. It was nice to hear some of their personal stories and make some friends while we were out there. That was definitely a big highlight to feel like we could give something back to them even as small as it is on our end, it meant a lot to them to get a taste of that. So that’s always one that sticks in our mind as a big accomplishment.

Amy: I know the new album is coming out next week, Asylum, what’s the story behind the name?

Dan: It was the first track we wrote for the album, first of all. And with David, lyrically, the majority of his stuff is all personal issues whether they are something that happened with him or something with a political stance or something that we all can relate with. And that was more a relationship issue. He had gone through a difficult break up. He’s had his struggles over the years. The three of us, with John, Mike, and me, have all gotten married and have kids now. David is the last one standing, but he’s had his ups and downs in relationships with trying to find a woman who can deal with the lifestyle we live and him being the front man of a successful band is not easy for many girls to commit to something like that. And luckily enough, he has a great girl with him now. But he’s had his ups and downs. So that’s been part of some themes on the records over the years. I’d love to see the guy happy but we tease him that when he’s miserable is when we get the best stuff out of him. We may have to sabotage him if he gets too happy. We may have to do something to still spark some good ideas out of him. 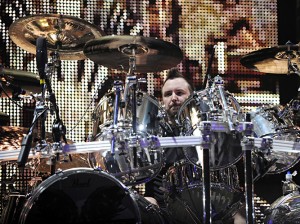 Dan: Friends… Family…  It’s a lot of the things you don’t realize when you get into the business. We dreamt of being musicians and being rock stars when we were little kids. You think, “Party, girls, music, traveling, it’s the life.” Which it’s great, it’s a great life. I don’t want to sound like I’m complaining about it. But the things you don’t think about is that you’re away from family and friends and that you’re living out of a suitcase. It wears on you body, it wears on your mind after a while. Even though it’s all worth it when we have time on stage. That makes it all worth it. But some of the down time, and being away from family and friends, you miss weddings, you miss funerals, you miss birthdays, you miss a lot of things you don’t realize. I missed my son’s first birthday and felt like the worst dad in the world. I’m in Germany playing in front of 80,000 people in front of Metallica. Hopefully my son will grow up and understand that I’m not a dead-beat dad, I was working to provide for my family. I’m lucky enough  that I can bring them on the road with me when I’m in the U.S. or Canada. So they travel with me. So it’s that balancing, that balancing of family and music career. It’s a great life. It’s what we love to do. We are very fortunate to have had a great career that’s lasted over a decade so far.