Kandi Burruss Interview from The Real Housewives of Atlanta 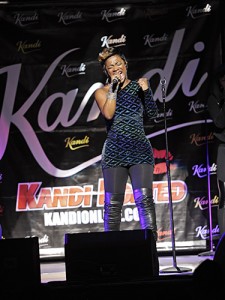 Kandi Burruss is a mogul amongst the entertainment ranks. Although she has reached personal fame through her recent starring role in Bravo‚Äôs hit franchise, The Real Housewives of Atlanta, Kandi has been a part of pop music culture for a couple decades. She started as part of the platinum-selling group Xscape and then went onto great song writing successes with Grammy winning songs with TLC and many other number one hits.

Amy just caught up with her¬†after seeing her perform in Cleveland last week.¬†Kandi is¬†promoting her sophomore offering, Kandi Koated, her most recently released record. She has just recently finished up touring with Fantasia, but Kandi will definitely not be out of the spotlight any time soon with her personal musical and entertainment hits.

Amy: Thank you for taking the time to talk to me today. I was in Cleveland last week and photographing the show with Fantasia and I caught you live for the first time. I really enjoyed the set. So what‚Äôs your favorite track on the album to perform?

Kandi: To perform? I think my favorite song to perform is How Could You Feel My Pain. I think that‚Äôs the first song we do.¬† It has so much energy and its aggressive and I like that.

Amy:¬† Gets the crowd moving?

Kandi: Yeah yeah. I also like the acapella song that we do Haven‚Äôt Loved Right when we do it acapella, but I really, really like it when we do Feel My Pain.

Amy: What was the inspiration behind it?

Kandi: Feel My Pain, I think I wrote that a while ago and really it was inspired by one of my ex-boyfriends who just wasn‚Äôt worth shit. He just wasn‚Äôt‚Äô‚Ä¶ He was just messing up badly all the time.

Amy:¬† It‚Äôs so funny because I know your songs are really personal and they are from your real life. I‚Äôve talked to bands before where they had one person in the band who wrote most of the songs and they were like, ‚ÄúGosh we hope he never gets in a stable relationship or we‚Äôre never going to have any songs.‚ÄĚ

Kandi: You know that‚Äôs so crazy because I‚Äôve said that before. Maybe that‚Äôs why my relationships are never that great because they give me good songwriting material.

Amy: Well I hope that‚Äôs not the case. I‚Äôm sure it will be fine for you. One of the questions I had is around your writing process. I know you write with a lot of people and you co-write. What is your process to sit down and do it. Is it like a 9-to-5 job or do you just kind of do it whenever inspiration hits you?

Kandi: Well lately I have just been writing whenever I get the chance to go to the studio. I just go in and try to be creative. But there was a time, to be honest with you; I treated it like a job. I have a studio in my house and for like, four years straight, I had an engineer on payroll and he would come to my house Monday through Friday and he would start working about noon, and I would come up with whatever I came up with for the day and go on about my business and the next day the same thing. I think when you really, really try to pump out a lot-a lot of songs, you‚Äôre in the studio a lot. 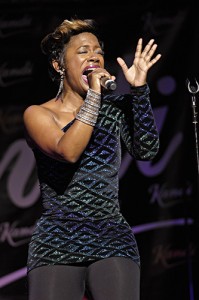 Amy: What‚Äôs your favorite song that you‚Äôve ever written?

Kandi: Probably the song, it was called Easier, and it was on my first solo album. It was a song I dedicated to my brother. It‚Äôs talking about when you lose somebody, you never totally get over it but it does get easier.

Amy: I know you wrote the song No Scrubs that ultimately TLC ended up recording. I bought a convertible to ride around and put the top down and play that song. I still do it today whenever I have a bad day. I still can‚Äôt believe I am talking to the person who wrote that song. ¬†You‚Äôve written with a lot of people, country writers, R & B, is there anybody out there that you haven‚Äôt sat down and written with or performed with that you would like to?

Kandi: Yeah. I‚Äôd love to work with Kanye West. It seems like he thinks outside of the box. I‚Äôd like to see what goes on in his head when he‚Äôs creating. I think that would be kind of cool. I‚Äôve collaborated with country songwriters but I‚Äôve never done anything for actual country artists. So I would love to work with Carrie Underwood or someone like that in country music.

Amy: That would be a great combo. I think there‚Äôs more and more collaboration with country music these days so anything‚Äôs possible. I‚Äôve caught a few episodes of the Real Housewives of Atlanta. I always thought you were one of the ones with the lesser amount of drama on that show. Are you guys really friends outside of filming?

Kandi: Well Kim and I were really really tight there for a minute. We haven‚Äôt been hanging out that much this year. But after my first season, we were hanging out all the time. We even went out on a few vacations together and all kinds of stuff.

Amy: I have to ask you because I don‚Äôt think you answered the question on the episode I saw. What is your freaky number?

Amy: I‚Äôd read a couple interviews you did this week and I know you‚Äôve spoke about advice that LL Cool J once gave you about making sure you have a house and car that‚Äôs paid for so you have something to fall back on and a place to live. What advice would you give people that are up and coming artists now?

Kandi: I feel like that‚Äôs the best advice he ever gave me, that‚Äôs right there. I would also tell people to diversify and do different things in the industry because you could be hot one minute and not the next, I would say, always be thinking about your next move in your current situation. Take for instance, I met Jheryl Busby, he was the President of Motown back when I was with DreamWorks and all these different labels. He and I had this conversation one year. He was coming up on his 30 years in the industry and I was only coming up to my 10th year.¬† I‚Äôve been in the business 18 years now. He said to me, ‚ÄúOk I see what you‚Äôre doing in your first 10 years, what are you doing for your next 10?‚ÄĚ And at the time, I had all kinds of hits on the radio. I was the like the number one writer out. So in my mind, I was thinking, ‚ÄúI‚Äôm on top of the world right now.‚ÄĚ¬† But, it never really hit me or occurred to me to think about what‚Äôs next, because everybody was thinking about the right now.¬† So it‚Äôs like whatever is hot at the moment, right now, is the stuff that we did yesterday. Do you get what I‚Äôm saying? 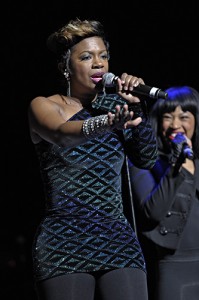 Kandi: So, you need to be planning your next move for tomorrow. So like when you think you‚Äôre hot right now, don‚Äôt ever get too cocky or big headed. I don‚Äôt believe in that. I hate when I come around people who have a little success or they want to walk around like they are so extra. What they don‚Äôt even realize is, the same people they are treating like trash or talking down to today, that person might be the president of whatever next year or five years from now. A lot of people don‚Äôt think about that. They just think they are hot right now and they don‚Äôt realize it doesn‚Äôt matter how hot you are, you can literally be ‚Äúwho cares‚ÄĚ in two years later. That‚Äôs just how the music industry works. I‚Äôm just thankful that I‚Äôve been able to stay relevant in the industry this long. And I also tell people to have more than one thing that you can do. Just being an artist is not enough because you never know when that‚Äôs going to wear off. You gotta be able to wear a different hat if you want to stay relevant.

Amy: You‚Äôve probably seen many, many artists come and go. And you‚Äôre still here. You have your own record label, entertainment company, TV now. You have a lot of success. How do you define success?

Kandi: That‚Äôs funny. I never really thought about it. I don‚Äôt know how I define success. I guess it‚Äôs when you‚Äôre¬† able to accomplish your goals‚Ä¶ what your goal was no matter how high that goal is or how low it is. It doesn‚Äôt matter what other people think. It‚Äôs all in your mind. Whatever it is that you wanted to accomplish, if you accomplish that, then you‚Äôve been successful.

Amy: You have to be driven. What‚Äôs next for you ‚Äď Are you recording more, TV, entertainment?

Kandi: Yeah, I‚Äôm still promoting the album. I am also working on a TV show that I‚Äôm executive producing. I‚Äôm not on the show; I‚Äôm behind the scenes and am the producer on the show.

Amy: When can we expect that?

Kandi: Hopefully by the end of the year or start of next year. I‚Äôm hoping. We‚Äôre in negotiations now. So I‚Äôm working on that. And then my internet show Kandi Koated Nights, I‚Äôm trying to take that to the next step. I really want it to be a TV show but we‚Äôve had some offers to do radio, my own radio show.

Kandi: Yeah Yeah. I think it could be really cool. I‚Äôm going to explore the opportunities with that as well. I have a girl group I‚Äôm trying to develop. I have another business in Atlanta I wanted to open up. So I‚Äôm working on finding a location for that.

Amy: So you basically have nothing going on?

Amy: I appreciate you taking the time to talk to me today. I wish you all the luck, but you don‚Äôt need it.