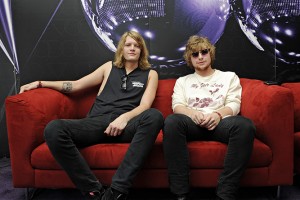 Cage The Elephant is a young five-piece from Bowling Green, KY,  Matt Shultz (vocals), Brad Shultz (guitar), Daniel Tichenor (bass), Lincoln Parish (guitar) and Jared Champion (drums). They accumulated 80 songs worth of ideas during a 2-year period touring around the globe and living abroad in England supporting their eponymous debut album.  As they began sorting through their arsenal of songs, they returned to Kentucky to record album two.

We had the good fortune of catching up with members Lincoln Parish and Daniel Tichenor prior to a performance at the 2010 Voodoo Festival in New Orleans.  They are currently promoting the upcoming album, Thank You Happy Birthday, to be released January 11, 2011, and their new single Shake Me Down.

Amy:  I appreciate you guys taking the time to talk to me.  I was interested in you guys because I’m from Clarksville, Tennessee which is very close to your hometown of Bowling Green.

Lincoln Parish: Yeah an hour away.

Amy: The local connection. I know you guys have the new album coming out soon, Thank You Happy Birthday. What’s the story behind the title?

Parish: There’s not one I don’t think.

Daniel Tichenor: Not one. We just couldn’t… I just think titles at times are… I don’t think they’re really necessary.

Amy: But your last one was self-titled.

Parish: It’s one thing if you’re doing a concept album.

Tichenor: But we were asked to come up with a title. So… 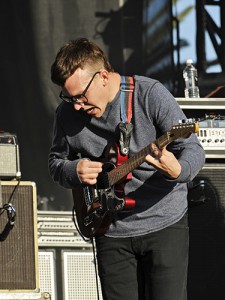 Amy: Was it somebody’s birthday?

Parish: There’s gonna be a picture of a cupcake on the front of the album cover.

Parish: We don’t know yet but it will be my proposed idea.

Amy: You guys have been touring with STP right?

Parish: Yeah we did for about a month.

Amy: Were you guys there when Scott fell off the stage in Cincinnati?

Parish: Yeah we were. I didn’t see it.

Amy: That was a crazy night. That stage is really high. It’s like six feet tall. I think that usually the speakers are right up on the stage and he’ll jump on them and go out and sing.

Parish: Yeah, they usually build a platform but I think they didn’t think he was going to go over that far. And he did. He expected it to be there and it wasn’t. He kept singing though.

Amy: He did. I talked to the security people the next week and they talked about pulling him out of the wires and they said he was pretty beat up. They said he sang the whole time. The band didn’t even miss a beat. I think if you’re lead singer fell off you guys might look for him right? 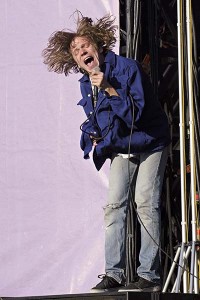 Tichenor: The thing is when you’re playing you’re really not paying attention. If somebody… If something happened to someone in the band you really don’t know.

Amy: You really wouldn’t notice for a while?

Tichenor: Yeah, Lincoln has fallen off and I didn’t even know he fell off.

Amy: You just keep going. I guess the only person who can’t fall off is really the drummer.

Parish: If he falls off, we’ve got big problems.

Amy: Have you guys been here just today? Were you here yesterday?

Parish: We got in yesterday afternoon.

Amy: Did you catch any of the shows?

Tichenor: We had rehearsal.

Parish: We had rehearsal. We haven’t played in a couple weeks.

Amy: What’s your favorite track on the new album and why?

Parish: I don’t know. I just like it. There are a lot of different elements I like about it. But it’s got a cool vibe.

Amy: Do you guys write most of the music?

Both: Yeah we write all of it. We write together.

Amy: And you do it together in the same room? I know a lot of bands write separately then they come together to put it all together.

Parish: I mean sometimes there might be an idea that starts off where there’s one person who has a guitar rift or a melody idea or something but usually…

Amy: You’re all together.

The band actually locked themselves away in a remote Kentucky cabin and, after just two weeks, emerged with Thank You, Happy Birthday, a set of songs that blasts through your speakers with ferocity.

Parish: Yeah for the most part.

Parish: It’s a lot of growth. 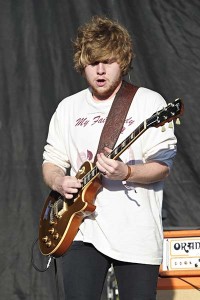 Amy: So how is it different? I loved the first album In One Ear…

Tichenor: It sounds a lot different. I mean you can still tell it’s us.

Amy: Do you guys have any ballads?

Tichenor: There’s quite a few. It’s all singing harmonies and…

Tichenor: The first album was more talky. This one’s singier.

Although Cage The Elephant has sold more records than most recent bands on their debuts, they have engaged in indulgences that took them off track and battled their share of demons and creative doubts. Their adversities forced them to take a fresh approach with their new album, and their lives.

Amy: So when you guys are touring, what do you miss about home? You guys live in Kentucky when you’re not touring, right?

Tichenor: I miss my bed.

Tichenor: Bed and some isolation. Sometimes you just want to do your own thing.

Parish: It’s kind of cool to have a little bit of stability for a little bit. Day to day kind of stuff.

Amy: I hear that a lot from people. They just like doing their laundry and doing normal things they can do at home versus on the road where everything is hard. You have to find logistically where we are going to eat. Are we washing our clothes in the sink today?

Tichenor: You have to get in your car and drive with stuff like that.

Amy: So how long have you guys lived in Nashville?

Parish: I’ve been there for about a year and half.

Amy: Which part of town do you live in?

Parish: I live in West End.

Amy: People are nice but there’s tons of music. Doesn’t it blow you away with all the talented musicians that are there that are never going to make it? It’s kind of depressing. They are super talented.

Amy: Do you guys play locally there a lot?

Parish: We haven’t played Nashville in over a year.

Tichenor: Our booking agent is very selective of when we play. You don’t want to overdo it.

Parish:  There was one point and time where we played Nashville like every weekend for a while.

Amy: I think it depends on where you’re at and what you’re doing and promoting. If you weren’t playing music, what would you be doing?

Tichenor: I worked at Lowe’s. So I’d still probably be working at Lowe’s and hating life.

Parish: I don’t really know what I would be doing.

Tichenor: I think it’s cause we started so young. There’s no telling what we would do.

Amy: This is all you ever wanted to do?

Parish: It’s hard to even like imagine not doing music. Even if the band was to break up now I still feel like I would do something in music.

Tichenor: At least try. There’s somebody you can always play with.

Parish: I think if you really love it, you’ll always do it no matter what.

Amy: So how do you define success?

Tichenor: If you’re content with the happenings of your life then you could be considered a success. There’s stuff from the outside that could be considered success, but if you’re not happy at the end of the day then what’s the point of doing it. That’s the way I see it. 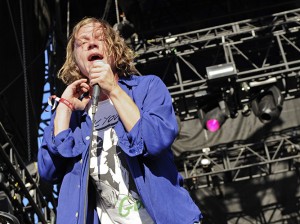 Parish: If you’re happy and content with what you’re doing, that’s success to me.

Amy: Obviously the record’s coming out…

Amy: Are you going to support it with a tour? Do you have anything line up yet?

Tichenor: We don’t really know what we’re doing after it comes out. It’s kind of up in the air right now.

Parish: We’re definitely going to be promoting it.

Amy: I’m hoping you guys come through Cincinnati and are at Rock on the Range next year?

Parish: Hopefully, we’ll get back over to Europe right when it comes out.

Amy: You guys lived there for a while right?

Tichenor: London… I liked it. It’s a different pace. It was all new to us.

Parish: At the time it was kind of weird. We didn’t really know what to think about it. But now looking back, I miss it a lot.

Amy: It’s uncomfortable a little bit. You’re out of the country. But when you get back and you reflect on it…

Parish:  But then you miss the little stuff. The kebab shops.

Amy: Exactly, I miss the accent from London. I think they have the best accent.

Parish: I have an English wife.

Amy: So that was your souvenir from the trip?

Tichenor: It’s so weird. I had a girlfriend from England and you get so used to that accent.

Parish: Every time we go to Chicago, for some reason in Chicago everybody thinks we sound so southern but I guess we do have the accent maybe.

Amy: That’s not too guilty

Parish: I think he likes that Bulletproof song by LaRoux. I don’t mind that song either.

Tichenor: There you go. That’s our guilty pleasure, LaRoux.

Amy: Is there anything else you guys want to say or promote? You talked about the first single. When’s it going to hit the radio?

Tichenor: Shake Me Down in a couple weeks around Thanksgiving time.

Amy: I’ve been listening to your other stuff for so long. I’m ready. I’m sure you guys are ready to play something new right?

Parish: The first album was like four years ago.

Amy: Are we going to hear new stuff today?

Parish: Yeah, we are actually going to play the new single tonight.

Amy: I look forward to it.  Thank you so much.

When the band played Voodoo Fest later that day after my interview on the main stage they proved to be one of the highlights of the day. Lead singer Matt Schultz was electric and did more stage diving than I had seen in a long time into their devoted legions of fans. At one point he even climbed up the scaffolding surrounding the sound booth and dove directly into the crowd. His Superman stunts and the band’s rebellious sing along lyrics got everyone excited for the second day of Voodoo Fest. 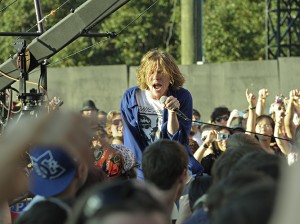