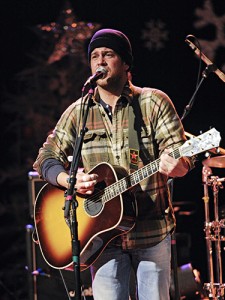 Christian Kane has a country sound with a bunch of attitude that is about to hit the mainstream. His title track off his debut album, The House Rules, is moving up the country charts and getting video play on CMT. The Oklahoma native has found success in Nashville, teaming up with many of the well-know veteran songwriters and the other fast climbing national acts like Jerrod Niemann.

Christian still may be more known for his role on TNT’s drama Leverage, but his time for hitting it big in the country music scene is upon us. I had a chance to speak with Christian just before his show in Covington Saturday night at the Madison Theater when he opened for fellow rising star, Randy Houser.

Christian: I have a house in L.A. but I’ve lived in Nashville for about seven years.

Amy: I know you were the lead singer of Kane, right? Do you still play with the band now that you are solo?

Christian: This is the same band. It’s kind of like Bon Jovi. Steve’s my Richie Sambora.  When Jon Bon Jovi plays with Richie, it’s Bon Jovi. You know what I mean. So it’s still Kane but we go by Christian Kane.

Amy: That was one of my questions. I was, “Did you leave your band? Go solo? Were they pissed off?”

Christian: Not at all. Same guys. Been with Steve Carlson for 12 years, Jason for 10.

Amy: I know you do the acting on TNT and you do the music. You’re pretty passionate about both. How do you fit in the schedule? Do you tour around the shooting schedules?

Christian: We have the weekends off so we play during the weekends.  We start touring as soon as Leverage wraps, which it’s only four and a half months. People don’t know that. TNT only does 15 episodes unlike major networks which do 22. So as soon as they wrap, I go back to Nashville, we get out and play. So it hasn’t really become a problem yet. This year, I don’t know, we’ll see.

Amy: I saw they just picked up the show for another season.

Christian: Yeah, fourth season. We go back in March. But we’ve got two months of touring to go. So it’s kind of nice.

Amy: When you’re on the road, what do you miss the most about home?

Amy: I travel a lot so I know that… I’m very mobile. 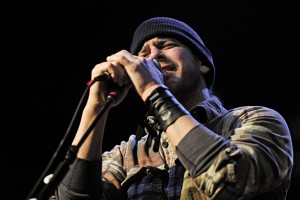 Christian: Well you never know what shirt you’re gonna need. I have 18 shirts for two shows.

Amy: So I’ve been listening to the album this week because I had heard you were coming. My favorite song on the album is American Made. I think that’s a hit.

Christian: Thank you so much. That’s our big Chevy Truck commercial. It’s funny because me and Steve wrote that. We wrote that about every state, the girls in every state mentioned are an actual person.

Amy: That was one of my questions, I want to know the names of these girls.

Christian: You can’t have the names of these girls. I could get sued or they could find me. It represents each state and the girls we’re talking about are somebody that either me or Steve had hung out with. So it’s kind of a unique story. I’ve never told that to anybody. You’re actually the first person to ask.

Amy: That song is the one that jumped out to me. When is that one going to be on the radio?

Christian: Thank you. A lot of people feel that way. We were going to do Whiskey in Mind might have been the second single. But now American Made is coming in a close second. So it could be. 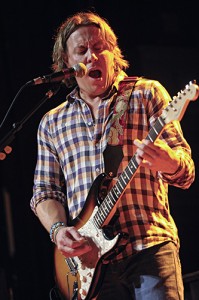 Amy: But I did want to ask about the girls.

Christian: I’m not giving you the names. No names. The innocent will be protected.  Many people are trying to figure it out. Some people know, some people don’t. They don’t know which one is which. Is it Steve or is it me?

Amy: So I did listen to Whiskey in Mind, so what’s your favorite type of whiskey?

Christian: I was in Louisville, Kentucky doing a film and The Woodbridge sent me a couple bottles and I really, really like their stuff.

Amy: It’s high caliber and you should go to their distillary. It’s near Lexington.

Christian: It’s high octane. They sent me a couple bottles and I kind of fell in love with it. But I’m a basic Jack guy.

Amy: Most people when they go to Nashville they start writing and they write with good people. You’ve actually have found some friends it looks like to write with you. What’s your actual process when you sit down to write?

Christian: I write in visual form. Maybe it’s my background being an actor. But I always write… Some people can hear or maybe see music notes and all that kinds of stuff. Different people, different strokes. I actually write in video form. I write and see the video. As I’m writing, I can see the video happening in my head.

Amy: I have interviewed one other person that visually wrote like that.

Christian: Yeah, I visually write. Who was that?

Amy: It was the lead singer of Theory of a Deadman, Tyler Connolly. 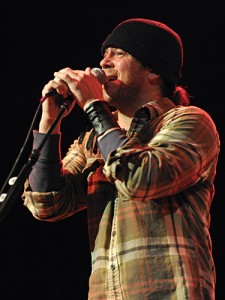 Amy: Do you think that has something to do with you being an actor and being in film?

Christian:  Absolutely. I can see different shot set-ups and stuff like that. With the video for The House Rules, and if you just got the album you probably haven’t seen the video yet. I worked on it with my dear friend Timothy Hutton, who I work with on Leverage.  I saw the video in my head and I saw what was going on and I gave it to him, my concept, and he made it ten times better. It was one steady cam shot of me getting out of the truck, going into the bar going downstairs, come back up and there were 400 people. When I walk in we do a 360 shot and see the place is empty, then I go downstairs and in less than a minute, come back up and get up on the stage and there are 400 people and it is night. It’s all one shot. No CGI, nothing. As soon as I turn my back, and the camera goes behind, everybody comes rushing in  from four different doors.  Then I go downstairs and greet the band.  I look in the mirror, then when I turn around and when the camera comes this way the room is empty because the band is now on stage. Thirty people had to run upstairs and get on stage. We got it in five shots. It’s really an unbelievable cinematography shot. Jay Franks from CMT loved it because it’s hard to do. It’s hard to do in television and in film and we did it in a video.

Amy: Is it on the countdown yet?

Amy: What are we expecting tonight?

Christian: With me and Randy Houser, just a good time.  A good ol’ time.

Christian: (Whispering) He did bring moonshine tonight. There’s gonna be a lot of drinking and a lot of rock n roll.