Randy Houser has been a whirlwind in the country music industry since debuting on the mainstream scene in 2008 with his album, Anything Goes.  That album featured two top 20 hits on the country charts, the title track, Anything Goes (No. 16) and his first number one hit, Boots On. This early success got the Lake, Mississippi native nominated at the CMA’s, ACM’s, and CMT Music Awards.

His latest album, They Call Me Cadillac, was released in September of this year and features hit single, Whistlin’ Dixie and current single A Man Like Me. This success earned him the spot of co- headliner of the national “CMT on Tour” with Jamey Johnson in 2009. In 2010, he has been on tour with Gary Allan and country up and comer Jerrod Niemann.

Amy: Thanks for taking the time to talk to us today.

Amy: I guess I’m a recent Randy Houser fan.  I went down to photograph the Tootsie’s 50th Anniversary at the Ryman in Nashville. This was the first time I had seen you perform live. Your duets with Jamey Johnson were great.

Amy: I know you moved to Nashville seven or eight years ago. Did you play at Tootsie’s when you moved? What was your experience like when you first got to Nashville?

Randy : No, I never had a house gig at Tootsie’s but I’d get up there and play every now and then. I was mostly writing songs when I first got to Nashville. That’s kind of what I came there to do, you know. Tootsie’s was definitely a place that I hung out and drank beer. I just kind of made a living as a songwriter when I first got there.

Amy: You’ve had some pretty big hits with Honky Tonk Badonkadonk  and other songs you have co-written. At first when I started reading song titles, I thought you were kind of obsessed with asses.

Randy: I kind of am.

Amy: I saw a theme with Back That Thing Up and Honky Tonk Badonkadonk.

Randy: Well the reason that is, after we had a big hit with Honky Tonk Badonkadonk, anybody that had an idea for a song about an ass wanted to bring it to us, Me or Jamey. 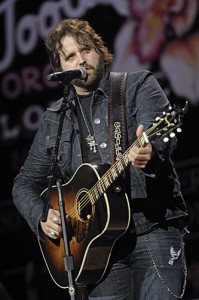 Amy: Well it’s good that you’re an expert in an area.

Randy: Well yeah, well a certain area. You gotta be an expert at something.

Amy: You guys are coming through Cincinnati. I know you’ve toured quite a bit. Have you been through here before? Is there anything you like to do in Cincinnati?

Randy: I’ve played at the Taft a few times. I mean, of course, I like to eat a little chili.

Amy: I’m not a good judge. I’m from Nashville and I’ve been here a while but I’ve never really got the chili on the spaghetti.

Randy: It’s different. It’s something I can do once or twice a year.

Amy: I’m like surrounded by Randy Houser this week. I open Country Weekly and you’re in that. You’re in Nashville when I’m there. My brother texted me last night, he was at the Titans game, and said, “Randy’s singing the National Anthem.”

Randy: Yeah I did. It was great.

Amy: You’ve been everywhere. I like to be a Titans fan. I’m trying really, really hard to be a fan.

Amy: I’m just hoping, like the Bengals, for a good draft pick.

Amy: How was that experience last night singing?

Randy: It was great. It was pretty amazing. There’s such a delay from the time you sing it to the time you hear it on the speakers. It is like a second. It kind of freaked me out.

Amy: It’s such a hard song to sing and it’s not the easiest to sing in cold weather.

Randy: Well, singing it is the easiest part. Remembering the words to it is a completely different thing. It’s just because you think about that one so hard whenever you go out there, you don’t want to screw it up. It’s not like you’re on auto-pilot. You always think you’re gonna mess up the words. Matter of fact, there was a Kansas City Chiefs game my buddy Mike Eli sang at last week with his band the Eli Young Band and he forgot the words to the anthem. It was horrible. You can see it on Youtube. It was pretty bad.

Amy: I’m sure he’ll appreciate the advertisement. It’s got to be really stressful. There are so many people.

Randy:  Well yeah… You can hear people in that video of him, “Lord, I’ve never seen that happen.” But they don’t understand how nerve-racking that one particular song is to sing because you don’t want to screw it up so bad and that’s why people do. They’re thinking about it so hard. People who don’t have to stand up and sing it in front of 90,000 people don’t understand.

Amy: It’s not something you’re on stage singing every night.

Randy: No it’s not. And it’s so important too. You kind of freak out. That’s what happens.

Amy: So you’ve written with a lot of really famous song writers in the past and had some great hits. Is there anybody you would like to sing with or record with that you haven’t had the chance to yet?

Randy: I mean yeah, there are several people. Reba would be one of them for sure. She is the queen you know. I think that would be really, really cool. As far as other artists I really dig, I like Keith Urban a lot. That would be fun to do something. You know Lee Ann Womack sang on my album with me in my newest album.

Amy: Her voice is great. She does a lot of duets. I think her voice is very nice in duets with male vocalists.

Randy: Yeah, she’s so good. I’d love to do something with Reba. That would be cool. And I always have a good time when me and Jamey sing together.

Amy: That was definitely my favorite moments at the Ryman. I loved seeing Kris Kristofferson in Nashville but the duet with you and Jamey that night was amazing…one of the highlights of the night. Have you toured together with Jamey at all?

Amy: I’m actually a pretty large Kid Rock fan. I know you performed at the CMT awards with him. Any crazy Kid Rock stories?

Randy: Nah. He’s pretty laid back you know. He’s a good guy. I’ve hung out with him a lot of nights. He’s a good dude. Nothing I can tell. Let’s put it that way.

Amy: I was reading your bio and your background. I saw your dad was a musician and he died when you were at fairly a young age. I kind of had that in common with you because my dad died suddenly too in my mid-20’s. It kind of changed my outlook on life a little bit about living for the moment and life is short.  I saw you moved to Nashville shortly after that. Did it have an impact on you? Did it change anything?

Randy: Yeah, I think it was a big part. I always wanted to move to Nashville and do want I want to do which was make a living making music. But I think it did the same thing for me. I think it taught me how short life is. I mean he was only 46.

Randy: You know then. Then you start thinking about the things you want to do with your life and that you’re just putting off and thinking “I’ll get around to it,” and you don’t if you’re not proactive about it at the time. So yeah, I think I learned the same thing you did.

Amy: Especially with him being musical, I’m sure he was a big influence in your life. Did you have any other musical influences growing up?

Randy: As far as people I listened to all the time, yeah. I was always surrounded by older guys. I always played in bands with older guys. I was in my mid-20s, early -20s, but there was always a crop of older musicians. At the time I was coming up through my late teens and early-20s and all, there were really no more musicians my age around. Everybody was into, if they were trying to play something, they were trying to play some heavy metal crap and I didn’t care nothing about it. And they couldn’t play because all they could do is scream. I just wasn’t into it. So I always played with older people. I had a lot of influences, I guess a lot of people teaching me to do what I do.

Amy: I have written a couple articles about Jamey (Johnson) in the past. It always strikes me that he seems much older than he is. He’s my age. I always think he’s old and wise from the way he writes and sings. So that’s probably similar playing and being surrounded by the older country music and having that as an influence.

Randy: Uh-huh… A lot comes from that.

Amy: What can we expect from the show on Saturday night?