Jonathan Tyler and the Northern Lights is a Dallas-based rock band with a great southern rock sound. The band is made up of front man Jonathan Tyler, guitar player Brandon Pinckard, bassist Nick Jay, vocalist Emotion Brown, and drummer Jordan Cain. They have released one album titled Pardon Me that includes the acclaimed song Gypsy Woman.

We caught up with the band after their early Sunday morning rocking performance at the Voodoo Experience Festival in New Orleans last weekend.  I have seen the band perform many times and they blew me away once again on this early Sunday morning revival. They were really a stand out act of the whole festival and brought an energized performance to the stage even after traveling all night from Florida to do the show. The band was excited to play and be part of the festival for the first time with an epic 2010 lineup of acts like Ozzy Osbourne, MUSE, and My Morning Jacket.

We talked about their upcoming Cincinnati area shows and how they got their start with Atlantic Records. They will be playing at Brick Street in Oxford, Ohio on Thursday, November 11th and Southgate House in Newport on Saturday night November 13th.

Amy: I read a lot of the articles about you guys from the Dallas newspapers. Is it true you guys got started by moving Kat Von D’s furniture and got hooked up with your record deal?

Jonathan Tyler: It was a long story. There were several people that we went through to get to Atlantic.

The band was signed in 2007 by Atlantic Records partly through a chance encounter. While in Dallas in early 2007, through a series of connections, the band was volunteered to help future television star Kat Von D move to Los Angeles. In exchange for moving furniture for the now famous tattoo artist from LA Ink, her manager watched the band perform and got the wheels turning on the career of JTNL. She sent along the band’s demo and the band was met with a strong interest among many labels. The rest, as they say, is history and the band has become a very popular touring act spending most of the year on the road. 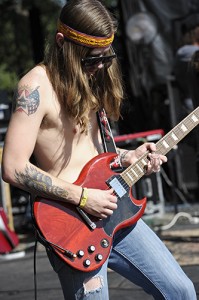 Nick Jay: (Nick nodding in agreement with Brandon) I think we did everything.

Jordan Cain: I sat on the couch while they moved it.

Tyler: Something happened there.

Jay: Kat’s sleeping on the couch. She wakes up and says “Oh my God there’s a bunch of cute boys in the house.”

Pinckard:  It definitely wasn’t all through Kat Von D, but that event sparked something that led us on our path.

Amy: To the record deal right?

Amy: So you guys have your album Pardon Me that’s out right now. What’s the story behind the name of the album?

Amy: I thought you were just being polite.

Tyler: It is polite.

Tyler: It’s just an introduction. It’s just like a “Hello, how are you doing?”

Amy: So are you guys working on any new music right now?

Tyler: Not a lot. But we are starting to toss around some ideas. 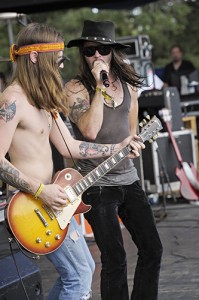 Pinckard: (Laughing) I’ve got a techno band I’ve been working with. I play the computer. I play the Macintosh.

Amy: Is that going to be on the new record?

Pinckard: I hope we can work some of it in.

Emotion Brown: The concepts are definitely coming to mind.  We have been thinking of concepts and small chords. Stuff is starting to develop.  We’re kind of just focused on making this one happen.

Amy: When you write, what’s your process? Do you guys do it together or separately?

Jay: It’s different for every song.

Tyler:  Usually we start with an idea like a guitar riff or a vocal line or melody or lyric. We start from that small idea and then build into a full song.

Pinckard: That’s pretty much what we have coming up. Just a lot of touring.

Jay: We just finished a three week tour with a band called JJ Grey and the Mofro and now we started headlining a tour this week for three weeks.

Amy: You guys have played some with a band that I know in Cincinnati, Grooveshire. They seem to fit your style a lot.

Tyler: They do. They are great guys.

Amy: Did you guys play with them at Cincinnati before?

Tyler: It was upstairs at…

Amy: How did you guys meet them?

Tyler: Just through playing there. We met them at the show.

Amy: What’s you favorite place to play in the U.S. or overseas?  Where do you like to play the most?

Jay: We haven’t been overseas yet.

Amy: Did you guys play SxSW?

Jay: Here for the past three years.

Pinckard: A bunch of times.

Amy: Do all of you still live in Dallas?

Amy: Small town vibe a little bit. Are you planning on going on the [Kid Rock Cruise] again? That’s the big one.

Tyler: If we are invited we will. If we get invited we’ll go. We might have got ourselves permanently exiled.

Jay: It could have happened.

Cain: Things that happen in international waters that you don’t need to talk about.

Pinckard: Things that don’t happen on the mainland…

Amy: So what is your craziest Kid Rock story? You guys have gone out with him.

Pinckard: There’s way too many already. We haven’t even played that much with him and we’ve got a lot of them. Most of them don’t even involve him directly. They just involve us.

Tyler: The first night on the cruise was pretty cool.

Tyler: We had an open bar when we first got on the boat.  All the bands were hanging out together and drinking drinks, shots, meeting new people in this certain section of the cruise ship. So we were hanging out in there for way too long. And we just decided to play at midnight. We were pretty much beyond… I was beyond…

Amy: But he came out and played with you didn’t he? 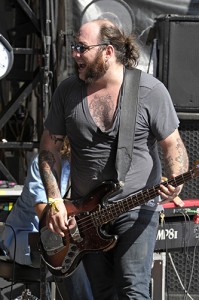 Tyler: Yeah and it was really cool. The only thing I remember about it is the video and pictures of it. But that’s a cool story. We didn’t know if we were going to make it through the set.

Pinckard: Once we got everybody’s pants on and got on stage everything was cool. We took a minute and then we played. We made it happen.

Amy: So how do you define success?

Tyler: Just getting to do what you want to do.

Pinckard: Yeah, just as long as I don’t have anyone chasing me around.

Amy: Most people I talk to don’t say fame or fortune. It’s a lot of the people who just love to play music.

Amy: If you weren’t playing music, what would you be doing? 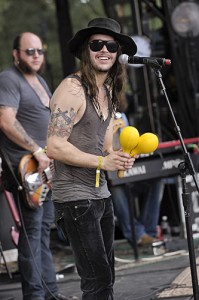 Cain: I’d probably be an astronaut.

Pinckard: I’d be a rambling man. Just traveling around.

Jay: I’d be working in Vegas as Jesus.

Tyler: You know we haven’t really done Vegas. We have only gone there for a gig.

Amy: Have you played there?

Amy: Is there anything else you guys want to promote or coming up?