We caught up with Shannon Larkin Sunday afternoon before the show on the bus to talk about football and about his musical influences. When I arrived I waited in their outdoor football viewing area where a TV comes out of the side of the bus and is setup for group viewing. You can tell members of these three bands are die hard football fans.

I had already done my research to know that Shannon loves the Oakland Raiders and has pretty strong feelings about them bringing down the San Diego Chargers last week for the first time in many years.

Amy: Do you feel like your Oakland Raiders are doing better than they should be? (Laughing)

Shannon: No. No I don’t. I feel like they are doing a lot worse than they should be. My Raiders story goes back to growing up. I was raised in Virginia area and my dad is a Notre Dame guy. He went to Notre Dame so I grew up watching ND football ever Saturday. Tim Brown, who was a number one draft pick and Heisman winner, went to play for the Raiders in 1987 or 1988. After that I always liked the Raiders. I also went to Redskins games at RFK growing up in Virginia, so the Raiders were my AFC team and I always loved the Skins. The last few years the Redskins have been terrible and they had Jason Campbell as their quarterback and then he got traded to Oakland and I didn’t understand why.

Amy: Now he is the starter right?

Shannon: Yes because Gradkowski got hurt. Al Davis has been very influencial with things he has done for the NFL. He has done some great things, but he is so old now like 88, he needs to let the team go and get some younger people. Let them win again.

Amy: Well, San Diego is losing today so you should be happy.

Shannon: Last week was so amazing. Every year, I watch the Raiders lose those two games against San Diego and last week Sully and I were jumping up and down when Oakland won for the first time in a long time.

Amy: Well, we are here in Bengals country, do you have any favorite Bengals?

Shannon: They are exciting this year with T.O. and Chad. Terrell Owens is still making amazing plays and touchdowns every game and is fun to watch. Carson Palmer is a great quarterback and hopefully he can prove himself in the big games.

Amy: Well maybe the Raiders and Bengals will see each other in the playoffs.

Shannon: I can only hope.

Amy: In music, you have played with legendary bands like Stone Sour, Black Sabbath, Candlebox, and others, but I read that you love to play funk music. We have the Bootsy Collins connection here in Cincinnati. Have you ever met Bootsy?

Shannon: I have never met Bootsy. It is funny last night we played Detroit and after the show there were fans waiting outside on the street and I always try to go out and sign autographs and take pictures with the fans. There was this older gray-haired black guy who came up to me and said he was in the P-Funk Allstars with George Clinton. He came up and said hi and that he liked the show. I love funk so that was interesting.

We were a family where the TV was mainly used for Saturday Notre Dame games. After dinner, we would go downstairs and my parents would play records for my sister and I like the Beatles and Creedence. One of the main records was Sly and the Family Stone Greatest Hits.

Amy: So you have always had it around.

Shannon: Yes, Sly and the Family Stone is the shit to me. It just has such a positive message in every song where all the musicians can shine. In my later years, I got into Zeppelin, RUSH, Slayer, Metallica of course. I am giving away my age. In 1984, it became Black Flag and punk bands. Everything kind of circles around. Now I am forty-something I am going back to my roots with 60’s and 70’s rock.

Shannon: My latest downloads have been “Pet Sounds” by the Beach Boys, which is another record my parents used to play and Paul McCartney’s “Wings.” People won’t believe it reading this.

Amy: Have you met Paul?

Shannon: Oh my god no. I wouldn’t even know what to say.

Shannon: After a long hard battle with myself after someone asked me who my top 5 bands were, I ended up picking Ramones, Beatles, Zeppelin, Jimi Hendrix Experience, and Sly and the Family Stone. Those are my influences and I wear them on my sleeve. 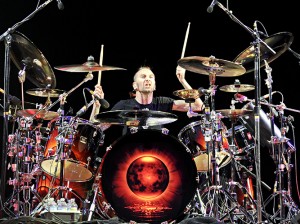 Amy: Is there anyone that you would like to collaborate with that you haven’t worked with yet.

Shannon: I’d love to work with George Clinton someday since he invented the word funk. Funk to me becomes about being in a room with friends to just jam with and you just make music and there is no pressure to make a record. You just get stoned and have a shot of tequila and just jam for three hours. It always becomes a funk riff that you can loop over and over where everyone can take their little part to shine. I would love someday to create some funk-pop music like Sly and Family Stone. Sly is like a freak that disappeared off the face of the earth so I know I will never get to play with him. George is still out there though with his crack pipe so there is a chance maybe I will be able to play with him.

Amy: You just played Sturgis this summer. Did you have fun? Any crazy stories?

Shannon: It was horrible for us.

Amy: Really? I thought you always enjoyed it.

Shannon: Well we are usually on tour when we play there and this time we weren’t so we didn’t have our bikes. It sucked. There were 500,000 people and bikes and we didn’t have ours. The show was fun but it was like putting a kid in the candy store and telling him he can’t have any and he has to watch all the other kids eat the candy.

Amy: What kind of bikes do you have?

Shannon: I have a 07 Heritage Softtail that is my reliable bike. I have a 77 Shovelhead that is my bar hopper bike. In fact my 77 Shovelhead is from a guy here in Cincinnati, Jeff Cochran with Speed King Customs. I ordered it from him here when I found out we would be working on the Oracle album in LA for four months. I knew I would need a bike in LA so I called him after I had seen him when I played here. He brought a whole bunch of bikes out and I fell in love with a red one with a suicide shifter. He came across the 77 and thought it would fit me better so he sent it out to me and I love it.

Amy: You guys have the new Oracle album which came out in the spring. What is your favorite song to play on the new album?

Shannon: “Oracle.” It is a 7.5 minute instrumental. At shows like Rock on the Range, when the album first came out we weren’t ready to tour so we would fly in for radio festival shows. It ended up being like a “best of” with two or three songs off the new record where as this is “The Oracle Tour.” It is Oracle heavy and we play 5 or 6 songs off the new record which makes it far more interesting to us to play new stuff that we haven’t played live before.

Amy: The “Love-Hate-Sex-Pain” song is all over the radio right now.

Shannon: That is so great to hear and what we did for all the songs in the show tonight is strip down the videos and make all new videos to go with each song. We hired a video guy from Motley Crue and dug through years of video tape trying to find stuff that would look cool on the big screens. Everything is brand new visually even if you don’t know all the new songs yet.

Amy: So are we going to see any pyro tonight?

Shannon: We actually have a laser show this time. Laser technology has kind of taken over the past few years and it is sick visually. You can get any can get any color lasers now and it actually takes two guys to run the lasers. It is actually cool from my vantage point as well to see the lasers over the crowd.

Amy: I know you have a family now. Do they ever come out on the road with you?

Shannon: No they don’t really, but we did start this tour in Florida so my wife and kid got to come out and experience the first two shows. They love it. My daughter is 12 now so she is at an age where she can appreciate it and have fun.

Amy: Do you ever worry about exposing her to it?

Shannon: No, we are all in our 40’s and we don’t do any of that crazy shit anymore. We did it all in previous bands before we joined Godsmack. I was 36 when I joined the band and was already married and had my daughter. The only thing I worry about is the language. You know we are a rock band and so when she comes backstage she’ll see people smoking and doing shots. We also did this one DVD called “Changes” and on the DVD I was late to sound check and Sully keeps yelling “Shannon Fucking Larkin” over and over. Now when fans see me and I am walking with my twelve year old people yell out, “Shannon Fucking Larkin” so she is exposed to that sometimes and I want to put ear muffs on her. As far and the drugs and girls though we are way over that.

Shannon: I play all the time. When I am home, I go in my garage and put on my Ipod and play along with every song on random shuffle. One minute it is the Stones and the next it is Slayer. It is a fun way to practice. Usually when the band is together without Sully, we just jam and play funk and other sounds as well. The other band members live in New Hampshire and I live in Florida so I don’t really have anyone to play with so I jam to the Ipod.

Amy: Does your daughter do any music?

Shannon: Yes she plays the trumpet in the school band which is cool. Maybe a funk duo is in the future who knows?

Amy: What is up next for the band? I know the record is still pretty new, but are you working on new music?

Shannon: No new music right now. We actually write by ourselves. Everyone has a little recorder that we use. Tony is actually back there playing guitar right now. He plays all day and when he gets a riff he likes, he will record it. By the time we start to write songs, we all have like 20 riffs as a starting point. We use those to write songs and a chorus. Right now we are just all focused on this tour. It is a pretty big production. Even though the set list is the same, the production changes and is ever evolving. Last night Sully came on the bus and we came up with a new ending to the set. We also just came up with a video for “The Enemy.” It is changing as we go, as we see parts that are weak, we make changes. Our video guys says he goes to sleep dreaming about edits.