Drowning Pool has come through the tri-state several times this summer culminating in the heavy metal rocking performance yesterday at Riverbend with Godsmack and Five Finger Death Punch. The band’s most recent record, their self titled album, Drowning Pool, was released on April 27, 2010.

I caught up with Stevie Benton, the band’s bass player this summer at X-fest in Indy and Dayton to discuss a lot of football, how to do laundry on the road and some of their crazy tour stories.

Amy: Have you been to the Cincinnati / Dayton area?

Stevie: Oh sure. Back in the day we used to play at Bogart’s all the time.  I don’t know if that place is still around?

Amy: Oh yeah – it’s there.  Is there anything in Cincinnati that you enjoy doing?

Stevie: The great thing about playing Bogart’s is that right across the street there is a place you can do your laundry with a bar. The laundromat and Walmart are about the two greatest things you can come across when you are on the road.  Everything you need right there in one place.

Amy: Sudsy Malone’s has closed down and when you come back you are going to be at Riverbend, so you won’t have access to a laundromat bar unfortunately.

Stevie: That’s all right.  We will make do.  Most of my stage clothes I just wash in the sink on the bus a few days anyway.  In a week they are kind of smelly.

Amy: I can only imagine what the buses are like after a few days.

Stevie: When we first started in 2001, I don’t know how it came about but we all had this deal that no one would wash their stage clothes for an entire tour. So for 6-8 weeks we would be up there in the same stage clothes every single day and we had a pact that no one could wash their stuff.  We were young and dumb back then.  No one is quite that disgusting anymore.  I guess we are a little more house broken now.

Amy: You are civilized now?

Stevie: Yeah – I guess so. Though washing in the sink is just one tiny step above that.

Amy: I travel all the time for work, so I do a lot of sink washing myself with those little Tide packets you buy at the store.  I have a supply of those. 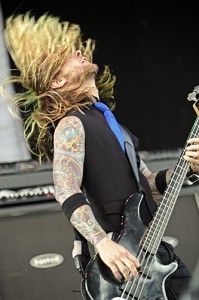 Amy: I’ve done that too when I run out of detergent.  The hotel shampoo bottles are a good back up to wash the clothes.

Stevie: You did not anticipate this turning into a conversation about laundry did you?

Amy: Another kind of off topic question, I’ve read you like fantasy football?  Are you guys doing a league this year?

Stevie: Absolutely!  We have our own Drowning Pool League with members of the band and close friends and family. Every year we take it very seriously.

Amy: Good choice.  Who are your sleeper picks?

Stevie: I’m gonna go with Dez Bryant from the Cowboys.  And I don’t know if he is a sleeper, but someone who is gonna come out his first year and have a good year is Ryan Matthews from San Diego in place of LaDainian Tomlinson.

Amy: We are the land of the Bengals, so I hope you have T.O. or Ochocinco are on your team.

Stevie: I do not, but you know who I really like is Jordan Shipley.  With him in the slot and the other two guys out wide, Shipley could really be a big fantasy sleeper this year.

Stevie: You know who else I love is Jermaine Gresham.

Amy: Okay – that is an intersesting one.

Stevie: Is he not that popular up there now?

Amy: He’s fine, you just hear about the others a lot more.

Stevie: He had a big career at Oklahoma.

Amy: The two best buddies are taking over all the press.

Stevie: Yeah – the whole Batman and Robin thing.  I don’t really buy into that too much.

Amy: I don’t know how much longer they are going to be best friends.

Stevie: You know that can’t last.  I will go with the other two guys though.

Stevie: It’s a shame they couldn’t get T.J. Houshmandzadeh back.

Amy: There was a lot of talk about that, but I don’t think they were interested.  Two divas are enough.

Stevie: It’s amazing all the money Seattle gave that dude and then just cut him.

Amy: I love football.  I’m at all the Bengals’ games and hopefully things will start to go better this year.

Amy: You guys are from Dallas so that is a given.  I didn’t even have to ask.

Stevie: Some of the guys are from New Orleans so they are Saints fans of course.  I had to listen that crap all off season.  It’s not crap – I shouldn’t say that.

Amy: They’re not bad, I was kind of rooting for them.

Amy: I went to school in Tennessee.  I watched Peyton play football for four years.  Never saw him win a championship.

Stevie: Did you pull for the Colts at all?  Or not really?

Amy: I do just because of Peyton, because I was there all those years.  I am kind of a Tennesse Titans / Colts / Bengals person because I have ties to all three.

Amy: You guys also do a lot of work with the military and the troops.  I know back in 2007-2008 you were doing a lot of that.  Have you been overseas recently?

Stevie: We haven’t recently. It was kind of unfortunate, but this past Thanksgiving we were going to head over there and have a show on an aircraft carrier, but Ryan’s dad got really sick, so we were not able to do that.  I would love it if that opportunity presents itself again this year.  We always make ourselves available.  There is always a lot of red tape when you are doing something like that.  We are always trying to make something happen.  It would be nice to do some type of holiday thing over there.  I’m keeping my fingers crossed.

Amy: I saw a couple of things you guys have coming up.  You are obviously doing X-fest festivals this summer.  Anything else coming up?

Stevie: We have three of those festival shows over the weekends – Nashville, Indianapolis, and Dayton.  Then we have a couple club shows that week.  And the following weekend in Dallas we are playing at this big outdoor stadium with Kiss.  This next two weeks, we will have a little bit of everything – the festivals, club shows, and big show. It’s a weird lineup. We are on a bill with Kiss and Daughtry.

Amy: I am a photographer and just shot and interviewed Kiss three weeks ago and it was one of the best experiences I have had.

Amy: Kiss is amazing. Is it your first time playing with them?

Stevie: No.  We did a few shows with them a couple years ago.  They were on tour with someone like Aerosmith or Poison and that band got sick and couldn’t do a few shows, so we were a fill in band.

Stevie: I won’t say who it was, but a member of Kiss tried to cock block me.

Amy: Oh really?  They are much older than you.

Stevie: Well what happened was I was back stage talking to this girl and one of their assistants or crew guys came up and said “Hey. Blah blah blah would like to know if you would like to spend the evening with him?”  And I was like what the hell?  I just kind of laughed because that’s pretty cool, you know?  Kiss was trying to steal my girl.

Amy: Did it work?

Stevie:  No-no-no.  At least not right then.  Hell I don’t know maybe they hooked up later.  I don’t know.  It didn’t work at the time, but maybe they kept in touch.

Stevie: I always have that story though.

Amy: So you guys are also going on a cruise?  ShipRocked, right?  Are you excited about that?  A lot of bands I talk to don’t love their experience on cruise ships.

Stevie: They did not? Really? I have never been on a cruise ship before. 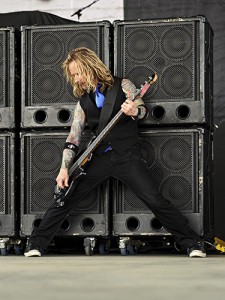 Amy: I think you will like it, but I have talked to a few bands recently that got a little claustrophobic and wanted off after a couple of days.

Stevie: It sounds like fun to me.  Especially some of the other bands that are on it with us, bands we are really good friends with like Tesla, Sevendust, and 10 Years.

Amy: How can you go wrong with Cinderella?

Stevie: I will have a blast.  Maybe I will be seasick the whole time, but I don’t know.  If I get sick, I will just tell everybody that I drank too much.

Amy: I went in May on the Kid Rock cruise and it was just insane.  It took me eight days to recover from the four day trip.

Stevie: Did you get seasick?

Amy: No, but I drank eighteen drinks one night.  The movement of the boat does not help at that point.   So your sick and the room is spinning and the room is really rocking.

Stevie: So it is really rocking and your head is spinning, so does it feel like you are standing straight?

Amy: No, you just feel like you want to die.  It’s mind over matter at that point.  At noon I just stood up and said I’m not going to be sick anymore.

Amy: Anything you want to promote?  I know you had a new album come out. How’s it doing?

Stevie: It’s great!  The first single went to #2.  We are working the second single right now.  We’re at about #20 right now, so it would be nice to see it get up there pretty quick, you know?  As long as we have been doing this, we have had a few #2’s, a few #3’s, but never a #1 hit.  There’s a lot of good songs on this record so were hoping one of them breaks that threshold for us.

Amy: How are you guys going to celebrate?  Do you have a plan?

Stevie: Damn it!  That’s a good question.  All this work and no plan for celebrating.  That sucks on my part.  You have any suggestions?

Amy: I don’t know.  I am sure it can involve Vegas or girls or champagne.

Stevie:  That old cliché – sure.

Amy: What do you guys like to do on your down time? Bowling……Basketball……

Stevie: No! In the fall, every thing revolves around football season.

Amy: Do you have spreadsheets and data about these players?

Stevie: Ryan does that.  He does the whole spreadsheet, really studying.  I go more on feeling.

Stevie: I am pretty consistent.  This is our forth of fifth year and I have finished in the top 3 every single year.  I’ll pat myself on the back there.

Amy: Work on that #1 Hit celebration and visualize it.  Maybe it will happen! 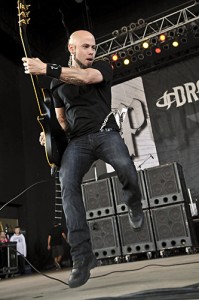 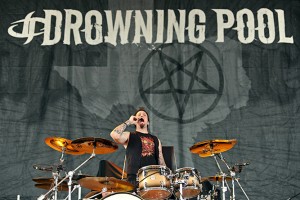 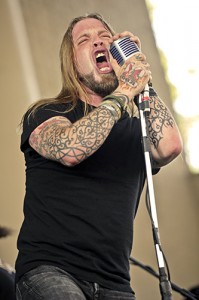